With Chicago Public Schools now in its 12th year under mayoral control and the district’s signature Renaissance 2010 initiative at the halfway mark, the time seemed ripe for Catalyst Chicago to take stock and ask the big questions: Where is the district headed? How can the district motivate key players and lead schools to the next level of achievement? What needs to be done to solve problems such as school violence? Catalyst editors interviewed Mayor Richard M. Daley, School Board President Rufus Williams, CEO Arne Duncan, Chief Education Officer Barbara Eason-Watkins and a small group of those working in the trenches in schools—parents, teachers and community activists. Following are excerpts from Editor-in-Chief Veronica Anderson’s interview with Daley in August.

It’s been 12 years since you’ve taken control of public schools, longer than any other mayor in the country. Talk about that journey: where you started, what your priorities were, and how they’ve evolved since then.

It’s the most complex and most challenging issue facing not just Chicago but America. It deals with the federal [government], the state, the local bureaucracy. It deals with conflicting messages adults are sending to children that education’s not important.

Same thing with politicians: It is an issue that, one day, it’s exciting. Then it’s off the top five issues of America, and that’s the failure of America to understand that education will solve all these issues. Crime, homelessness, [troubled] families—all the other issues—revolve around the lack of quality education.

What is your vision then for the next four years?

The vision is to, first of all, have all the elected officials in the state say that education is the highest priority. Just think, Illinois does not have a full-day kindergarten. So, we’re a progressive state. We’re a blue state or whatever it is—why don’t we have full-day kindergarten?

We have to rethink this whole idea of a full-day, full-year school, instead of two-and-a-half months off. If we don’t, we’re going to fall further and further behind other countries that have changed or will change—and other dynamic countries that are moving ahead in a much different way in education.

How does the school system motivate parents?

I think that the responsibility of the Board of Education is to motivate parents. Those who can’t be motivated—we have to take responsibility for the lost children in our society and in our school system. If [parents] can’t take care of them, someone should step up.

There’s a pretty famous example of school improvement in Edmonton, Canada: complete transparency and accountability across the board. Given the pressure to report good news, how is it that you can motivate educators, parents, staff to do what needs to be done?

Prior to 1995, no one even knew where [students] were. The bureaucracy said you have no right to challenge this. You test children for their own benefit, for the teacher’s benefit, and the parents’ benefit. Find out if he or she is learning anything.

If a child gets out at 1:30, 2:00 and 2:30, [it’s] very challenging for them to run home and open a book. So America has to make the difference. Should they run home or should they stay in the community center, and I call the community centers school. Instead of sending everybody home, you can do cultural activities, sports. You can do your homework, technology. This is the place to benefit yourself, not the street.

Everybody should know in the community if their attendance is at 80 percent, if the dropout rate in high school is at 40 percent in freshman class, or 25 percent. I believe in transparency because it’s the taxpayer’s money. They should tell the truth about it. There’s nothing wrong with that.

What about people outside of the ones who work for the district—the community leaders, parents, students? Do you need them on board for your vision for schools?

You need the parents and community people to really take an interest in education. Have they talked to their state representative? Have they talked to their senator? Their congressman? And I think you need parents to help their children. I mean, you have to sacrifice for your children. This idea that public schools can take care of all the issues, I disagree. And I think we have to talk about those inspiring parents that are doing those good things for their children—who many times everybody thinks they wouldn’t do it.

There are a lot of big-picture reforms in the works. There’s high school transformation. There’s Preschool for All. There’s the performance pay pilot for teachers, the streamlining of the literacy curriculum. Renaissance 2010. Where are all these initiatives taking the public schools? Are they islands of excellence or is this part of a big picture going in one direction?

Do after-school programs go away if you get the longer day?

No, no, because no child’s going to sit in a classroom for seven hours. We all know. They have good instruction, and after that you’ll have a homework program. You have a technology program. You have all types of after-school programs.

Recently, Chicago Public Schools has embraced more principal empowerment. Do you think it’s important for schools and principals to have more freedom?

Oh, yeah, they chart their own course, but you can’t have someone go and chart a course that has no results for a child.

Within limits. Everybody has limits. The mayor has limits. You have to be able to get a good principal who understands how important their mission is. And it requires good, solid teachers that are recruited. If you don’t raise standards, children will never meet them.

I think they should have a role in it, but here’s your principal at Curie High School, done a tremendous job. They’re throwing her out because they don’t like her. Unbelievable!

Is there a better way to use local school councils or to tap their potential for getting parents more involved in schools?

So individually, LSC members can do more with children.

How about the children on the block? You’ll see some kids not going to school. Raise an alarm.

Switching gears a bit, what are your expectations for the next teachers’ contract?

Negotiate fairly and honestly with them. We have poured more money into infrastructure. No other city’s done this. And to me, everybody has responsibilities . . . because we have to make this system a better system.

Arne Duncan is going into his seventh year as CEO, longer than most superintendents of urban school districts. What would you look for in his successor?

Oh, I’m not going to look for a successor.

He’s going to stay for another four years?

Yeah. I really believe that if a person has the passion and commitment and is willing to think out the box, they should stay.

What is your vision for charter schools? [Are they] islands of excellence to emulate? Or do you think there’s a possibility that the cap can be raised and you can open as many charter schools and contract schools as possible?

You need competition. We’re considered one of the best higher education systems in the world—we have competition. But we don’t have the best in elementary and high school because you have no competition. That’s the issue.

The hopes were incredibly high something was going to happen with school funding this year.

Yeah. Where are the voices of the people? Local school councils? Everybody has to be mobilized on this. It’s not going to end with this session. You have to mobilize, keep mobilizing that education funding is the key. 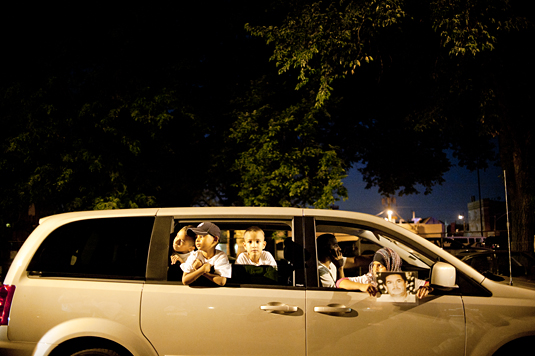 Demonstrators hold a peace rally on Chicago's West Side.