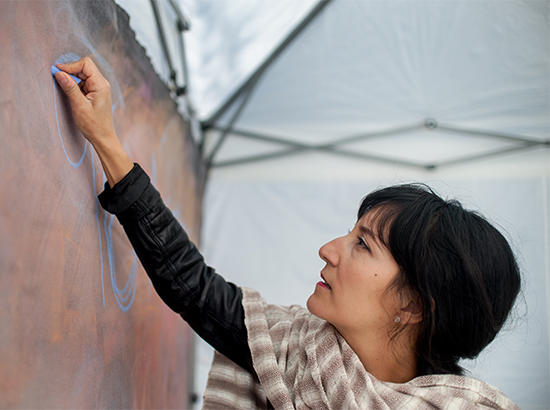 Maria Gaspar is founder of the 96 Acres project, which explores the impact of the Cook County Jail on Chicago through art. [Photo by William Camargo]

Maria Gaspar’s mother was a clown, and Gaspar would go with her when she performed at house parties. But being a clown was only one of her mother’s jobs. She also taught elementary school students in Little Village and hosted community radio shows about poetry and women’s health. She inspired Gaspar with her ability to make people happy and her devotion to mixing art and community in her work and life.

As a teenager, Gaspar helped Chicago artists with their murals. She loved that public art gave artists a chance to give back to their communities.

She went on to dedicate herself to giving back — teaching at the Art Institute, running arts and culture programming in Little Village, and two years ago, founding the 96 Acres project.

The project explores the impact of the Cook County Jail on the Chicago community through art. Its name comes from the 96 acres of land that the jail occupies. Participants have created audio stories about personal experiences with the jail, participated in educational workshops and set up a mobile photo studio across from the jail, among other projects. They have several more ideas in the works.

The Chicago Reporter sat down with Gaspar, 34, to discuss 96 Acres and its particular blend of art, social justice and education.

Explain what 96 Acres is.
The 96 Acres project was started by organizers and artists, including myself, in Little Village. We were interested in responding to the impact that the jail has on our community and communities of color. Given that the jail is one of the largest single-site pre-detention facilities in the country, we were thinking about what it means to have this sizable and very contentious place in our community.

We’re responding to the jail creatively and critically through educational workshops, through community meetings and artistic projects. We started our audio archive maybe about a year ago. An ongoing component of the project is capturing people’s personal stories — perceptions, experiences, [from] either being inside the jail or having spent time inside or having had family members jailed. We’re working with these artistic methods, but it’s not solely art. We’re working with violence prevention workers; we’re working with educators, restorative justice leaders, so to me it’s really about crossing these multiple kinds of disciplines.

How has 96 Acres evolved since it started?
There’s an acre of land outside the jail on 26th Street that had for many years the Burlington Northern train tracks running through it. If you’ve spent time there or walk by, you’ll notice that people don’t walk on that side of the street, or they’ll walk in the actual street because there’s no sidewalk. It is [a demeaning] experience of walking to see somebody, after spending several hours getting to the jail, and then not even being able to easily walk through. We wondered what we can do as artists and organizers to create a more humanizing experience.

Initially we were thinking about landscape projects. But very quickly, we started asking ourselves larger, more important questions like, how do we engage a group of people to think about how the jail affects them, and also how to make an invisible space more visible.

Why is art a good way to discuss the impact of the Cook County Jail on the surrounding community?
I think art has the ability to be accessible to different kinds of people. You don’t have to be an artist to participate. That has been really critical for our project, that it really needs to be absolutely accessible. Also, it has the ability to talk about a highly political issue in sometimes very poetic ways. How can we talk about issues of incarceration through performance? Through the body? Through the gesture? Through voice? Through narration? Through a set of images? I can evoke an emotional response, a call to action.  And I think we can talk about the realities of the jail, but we can also talk about the way that it has emotionally affected groups of people, especially people of color.

What kind of reaction have you gotten to the various 96 Acres projects?
People are definitely excited to be part of a conversation about the jail. They’re so interested in the education component, so that’s becoming more and more important, as a group, as part of our vision.

Some people are also curious and want to know more about what we’re doing. We understood that you can’t just drop in one day and do it, you need to be there for several weeks. And people will begin to see you, and begin to get to know you, and then maybe they want to participate. If they don’t want get their picture taken, maybe they want to have a conversation, and that’s great too.

When did you know this work was important?
I went to the Rudy Lozano Leadership Academy to give a presentation about maybe a year ago. The first time I went, I asked who had a personal relationship with the jail. All of them raised their hands. And that’s not the first time that’s happened.

I think this project gives people the space to tell those stories. Working with young people, it’s super important to talk about it. Because we’re talking about power, we’re talking about stigma, we’re talking about feeling powerless. What are the traumas that our communities are dealing with? What are the ways that we are countering these negative stereotypes about our communities? And I think these are all the things that we can talk about in these audio pieces. We need to hear them out, and we need to create a platform for these ideas to be shared. And the thing with the audio, is anyone can listen. You can go online, you can be in Japan and listen to this audio.  It can really transcend geography. And that’s important.