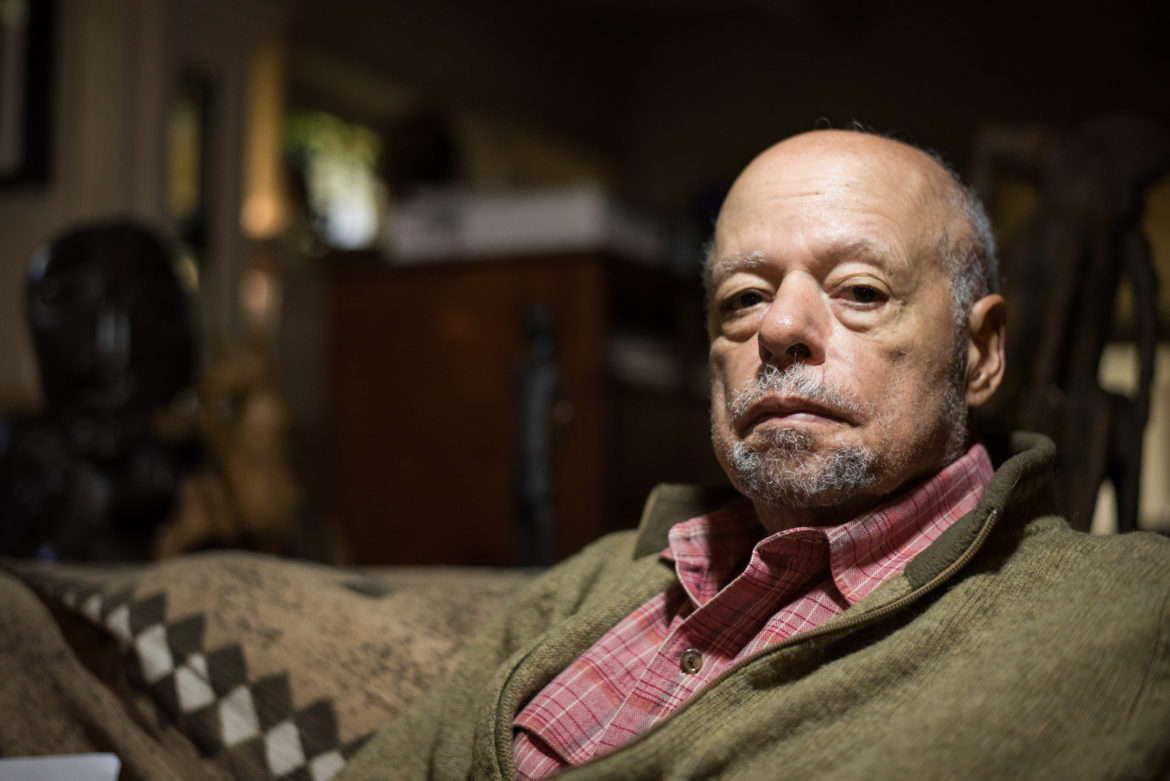 When the Afro-American Patrolmen’s League was founded in 1968, it sought to be a buffer between the Chicago Police Department and the city’s African-American community.

The nascent Black Power movement was transforming the consciousness of black youth, and in response to police violence, African-Americans were demanding a voice in policing.

“This was at the time of the Black Panther Party, and I stressed we lived in the community, we did not live outside the community,” said Edward “Buzz” Palmer, among the founders of the League. “We had to protect the black community because it was where we lived.’’ Palmer, third from left, in a meeting with former Mayor Harold Washington circa 1984.

Now, as then, being an African-American police officer — black in blue — can be a contentious choice in a community that is in a tug-of-war over police conduct.

African-Americans are 25 percent of Chicago’s police force; the population is about one-third black.

The trial of police Commander Glenn Evans, which is scheduled to begin in December, highlights divisions in neighborhoods where crime is often highest and police misconduct complaints are frequent. Evans, a 28-year veteran of the Police Department, is accused of shoving the barrel of a gun down a man’s throat while simultaneously holding a stun gun to his genitals. He has pleaded not guilty to two counts of aggravated battery and seven counts of official misconduct.

The national discussion of police violence against civilians is cast in black and white – black victims, white aggressors. But the man Evans is accused of abusing, Rickey Williams, is also black, adding another layer to a racialized narrative of police abuse.

“You have one side of the community supporting what [Evans] does, saying, ‘Yeah, get all those gangbangers off the streets, while you have another part of the community saying, ‘Hey, maybe they did something wrong, but that isn’t any reason to violate their constitutional rights,’” said Pat Hill, who retired from the police force in 2007 and is the former executive director of the African American Police League, formerly the Afro-American Patrolmen’s League.

For Hill and Palmer, who fought to wear the badge and for respect within the Police Department, Evans’ story stains the legacy they had hoped to foster. But for some advocates for police reform, the race of a police officer never mattered.

“The [Black Youth Project 100] doesn’t differentiate between black police officers and white police officers,” said Janae Bonsu, Chicago co-chair of the group, which has organized several protests against Police Department policies. “The institution of policing is inherently oppressive. As a black cop or brown cop, you are in a position of power over the group of people you are policing. Black police antagonize us. Black police still profile us.”

‘He keeps doing it because it gets rewarded’

Like many black police officers, Evans worked in predominantly African-American districts on the city’s South and West sides. Despite an unprecedented number of complaints, he moved up the ranks. Between January 2006 and July 2014, 36 complaints were filed against Evans; still he was steadily promoted, eventually becoming commander of the Grand Crossing police district. Only 34 officers in the department have chalked up more complaints against them than Evans, and no one at his level has more, according to a Chicago Tribune investigation. Hill, who knows Evans, says the black community is divided over his tactics.

“His stuff is blatant, and he keeps doing it because it gets rewarded,” she said. “I can guarantee you if by some mistake they made him a commander in Bridgeport (a white community), he would not do that stuff.”

The black community complains that police don’t make a distinction between law-abiding citizens and criminals, Hill said. Yet “anybody can come into our community and do anything” because people don’t demand respect.

“Black officers are in a very precarious position. They lack stability and known standards and expectations coming out of our community,” said Hill, adding that the City Council black caucus should be a part of setting those standards. “All we know is we don’t want the police to beat us up and shoot us. That is the only message that comes out of our community.”

Frank Chapman, of the Chicago Alliance against Racist and Political Repression, said the structure of police departments, which he describes as “paramilitary organizations,” prevent black officers from acting differently.

“A lot of black police throughout the country formed their own associations in the late ’60s and the ’70s,” he said, “and that was because they wanted to fight the racism inside of the institution itself—an institution that is occupying your community and you are a member of it.”

For all the good work of the League, which disbanded in 2012, the organization didn’t create a movement for change among black officers, Chapman said. “You have to follow orders.”

When the League was formed, it was considered a community organization. Its motto reflected that: “We support the black community.”

In the early 1970s, the organization morphed into a union for black police officers, according to Hill, and it began pushing for parity. Patrol cars weren’t integrated. Black officers’ assignments could change at a moment’s notice, and they started their shifts later than white officers. African-American cops called the practice “the watermelon watch.”

In 1973, the League sued the city and the Police Department in federal court for discrimination in hiring, promotions and assignments. The city was confronted with a series of lawsuits, and, at one point, federal funding for the police force was withheld. In 1976, federal Judge Prentice Marshall ruled that the Chicago Police Department needed to promote more minorities and women.

Today, black police officers are afraid to speak out about departmental issues, Hill said, adding that she noticed that as early as 2012 when they decided the League was no longer needed. Their perception that they will be punished for talking about departmental conditions, especially to the media, is not true, she said.

David (pronounced Daveed) Lemieux joined the Police Department in 1982. “A lot of Negroes, and I use that word deliberately, were afraid to join the League,” he said. “I joined right away.”

A year later, Harold Washington became the city’s first black mayor. There was an immediate difference in the department, said Lemieux, an actor who gained acclaim for his role as Pretty Willie in the 1973 film “The Spook who Sat by the Door.”

Washington made a concerted effort to increase the number of African-American police supervisors. His actions, Lemieux said, prompted many white officers to transfer from the 3rd District, where he was stationed and later where Evans was a commander, to other districts. He said the white officers who remained had always been respectful of the residents in the district, which encompasses 60th to 75th streets and the Dan Ryan Expressway to Lake Michigan.

Previously, the white officers were assigned east of Stony Island Avenue in what Lemieux described as an informal policy. “They called that the ‘safe part’ of the district,” he said chuckling.

The remainder of the white officers who didn’t want to work in the district transferred when Washington was reelected.

“That eliminated police going out hunting black boys. That eliminated the contempt that so many [black residents] held for the police who were occupying an area,” said Lemieux.

Long before they met, Lemieux and his long-time police partner, Gerald Hamilton, shared a commitment to advocating for African-American residents and mitigating the abuse so many were experiencing at the hands of white officers.

“When we worked in the community, you might be having Sunday breakfast with your family at Army and Lou’s,” he said, referring to a former soul food restaurant on East 75th Street. “Using commonsense you shouldn’t mess over people you are going to see. I am not afraid of my own people. I love my people.”

Hamilton said many African-American officers didn’t agree with Lemieux. “When I joined, I said I am my brother’s keeper.” But for many of his peers, he said, “The blue often overrode the black.”

‘The police are the public’

A police department that is representative of the community matters, according to experts who study police-community relations.

“One of the most fundamental principles of policing is that the police are the public and the public are the police,” said Craig Futterman, a clinical professor of law at the University of Chicago and founder of the Civil Rights and Police Accountability Project at the university’s Mandel Legal Aid Clinic. “When you have a police department that doesn’t look like the public they serve that dramatizes the police-community divide.”

Recruitment and promotion of officers of color have dogged the Chicago Police Department for decades as city leaders have attempted to create a department that mirrors the population, which is about one-third white, African-American and Latino. The Police Department is 52 percent white, 19 percent Latino and 25 percent black, according to the 2013 Law Enforcement Management and Administrative Statistics, Bureau of Justice Statistics. Janae Bonsu, co-chair of the Black Youth Project 100, says that the race of a police officer makes no difference. “The institution of policing is inherently oppressive,” she says.

In recent years, the city has grappled with how to increase those numbers and in September awarded a contract to a firm to boost minority recruitment in the Police Department.

For the past four years, Futterman has been talking to high school students, many of them African-American, about their experiences with police officers. “Those who spoke most positively about the police were those who feel the officers could identify with their experiences,” he said. “We saw some build positive relationships based on their ability to understand and empathize … Some students even saw [the police officers] as role models.”

The departments that reflect the community send a message of equity and fairness, said Futterman, and that “promotes legitimacy and principles of justice.”

Chapman said legitimacy comes through community oversight of the police department. The Chicago Alliance against Racist and Political Repression proposes to dismantle the city agencies responsible for investigating allegations of police wrongdoing, including the Independent Police Review Authority, and replace them with an elected Citizens Police Accountability Council.

“They [local elected officials] have to let the people in the community control the police,” Chapman said, adding that IPRA and other bodies are “cover up agencies for the police.”

Bonsu, of the Black Youth Project 100, said her organization doesn’t condone increasing the number of officers in neighborhoods. The high arrest figures for marijuana possession among the city’s African-Americans indicate that police of all colors are profiling and performing “over-surveillance” in the black community, she said.

No matter the race of the officer, Bonsu said, “Black people are systematically criminalized in Chicago.”

Glenn Reedus is an independent journalist.