In summer school earlier this year, “James,” a 6th-grader at Howe Elementary, was having a run of bad days. He had enrolled at Howe a couple of years earlier and had some minor discipline problems, but soon became a star student.

Then came an abrupt switch. “He was talking back and was disrespectful to teachers,” says Sanya Gool, Howe’s social worker for the past six years. Even though she is responsible for nearly 700 students, Gool remembers James well.

Later, Gool would learn from James’ grandfather and primary guardian that the boy’s mother had recently returned to prison. “It gave me some insight on why he was having these problems, and I was able to share this with his teachers,” Gool says.

Gool did not provide James’ real name, to protect the juvenile’s identity. But unfortunately, his family’s upheaval is not unusual among public school students in Austin—a community where a significant chunk of people who are released from prison go to get back on their feet.

In 2005, 2,537 people left prison under supervision and returned to zip code areas that partially or totally lie within Austin. That’s about 13 percent of the 19,167 former prisoners who returned to communities in Cook County last year, and about 8 percent of those released statewide.

Even though the number of families coping with an incarcerated parent may seem jarring, there are no targeted programs in Chicago Public Schools to help identify or support students like James.

“The status of a student’s parent is private information that we cannot require, therefore it’s difficult for us to determine whether a student’s parent is incarcerated,” says CPS spokeswoman Ana Vargas. A child in James’ situation would be handled the same as a child who needed intervention for any reason, such as a death in the family, she adds.

Seven million children, or one in 10 nationwide, have a parent behind bars, on probation or on parole, according to a 2005 report by San Francisco Children of Incarcerated Parents Partnership, an advocacy group for children whose parents are in prison.

Last year, the organization issued a bill of rights for children whose parents are arrested or imprisoned that asserts, among other things, their right to specially trained counselors and other mentors.

Nationwide, those helping ex-offenders to reconnect to their communities have increasingly turned their attention to children, who can have problems with behavior, self esteem and social adjustment as a result of their primary caretaker being incarcerated. Much of this work has occurred on the East and West coasts, but Chicago has become increasingly involved, activists say.

In Illinois, a task force for children of prisoners was formed in 2003, and after hosting a conference two years later, it established a mission and goals like increased training and support for caregivers as well as social educators, social workers and other mentors.

Having a parent locked up in prison can be devastating for a child, particularly if it’s the mother, who most often is the primary caretaker, says task force member Gail Smith, executive director of Chicago Legal Advocacy for Incarcerated Mothers.

Typically, women have shorter sentences, “but it can have a huge impact on their child.” Smith says. “It’s hard [for them] to concentrate in school. Most children grieve by getting angry. A teacher may read that as something else.”

‘probably a lot more than we know’

Gool, James’ social worker, says it took a couple of years for her to learn that James’ behavior problems were tied to his mother’s imprisonment. She can only wonder how many other children at Howe are dealing with similar issues.

“There are probably a lot more than we know about, but there’s no way to identify those students,” Gool says. “It’s not like we can send out a survey.”

When James was having a rough time back in 4th grade, he was enrolled in an art therapy program at Howe that helped children deal with anger and build better social skills. To help children confront bottled up emotions, a therapist working with students once a week might have students draw super heroes who squeeze out anger. Or they might be assigned to work with a classmate on a joint project to learn teamwork. The art therapist was provided by a grant from Chicago Communities in Schools, a group that connects public school students and their families with social services. James was in the program for two years. “Eventually, he became the model student,” Gool says.

Complications arising from a parent’s incarceration extend beyond a child’s emotional and behavior problems. A parent’s imprisonment can also lead to logistical problems, like where a child can enroll in school, Smith says. A child whose parent is in prison often acquires a new address because they have to move in with a grandparent or guardian. That can affect school admissions, which for most public elementary schools is tied to an attendance area. In some instances, Smith says, guardians have been falsely accused of “school shopping,” the practice of using false addresses to get a child into a desired school.

Worse yet, Smith notes, are instances when teachers and other school staff know that a child is dealing with a parent’s incarceration but stigmatize rather than support them.

“We have had situations where a caretaker has shared [information about a parent in prison] and really regretted it,” Smith says. “If something is missing, everybody looks at that child first.”

“We tell parents it can be helpful to talk to a school social worker but to be careful because sometimes it can backfire,” Smith explains.

‘I haven’t seen her in a long time’

Howe Principal Vanessa Young, an Austin High School graduate, says it would be easier to identify children like James, whose mother recently returned home, if the school had a second social worker whose primary responsibility was to handle such cases. “You tend not to come up to school and blurt that out,” says Young, who does volunteer work with ex-offenders at her West Side church.

While some students like James have the benefit of a social worker such as Gool, others—for instance, “Jordan,” a 14-year-old 8th-grader whose parents and two older brothers are behind bars—rely on grandparents.

Jordan and his 13-year old brother, “Robert,” live with their maternal grandmother, but they also spend a lot of time with their father’s mother, Alice Jackson, who is executive director of Mother’s House, a halfway house in Austin for women who are ex-offenders or are confronting other issues such as domestic violence.

“Of course it’s a big deal,” says Jackson, noting the impact of Jordan’s mother and father being in prison. Teenaged boys, like Jordan and his younger brother, often assume an I-don’t-care attitude about their parents, but it’s just a cover, she adds.

Both of Jordan’s older twin brothers are in prison on drug charges, says Jackson. His father is serving a six-year term on drug-related charges at a federal prison and is slated for release in June 2008.

However, Jordan has his sights set on Feb. 9 of next year. That’s when his mother will be released after completing a two-year sentence for retail theft, according to state Dept. of Corrections records.

Note: Children’s names have been changed to protect their privacy. 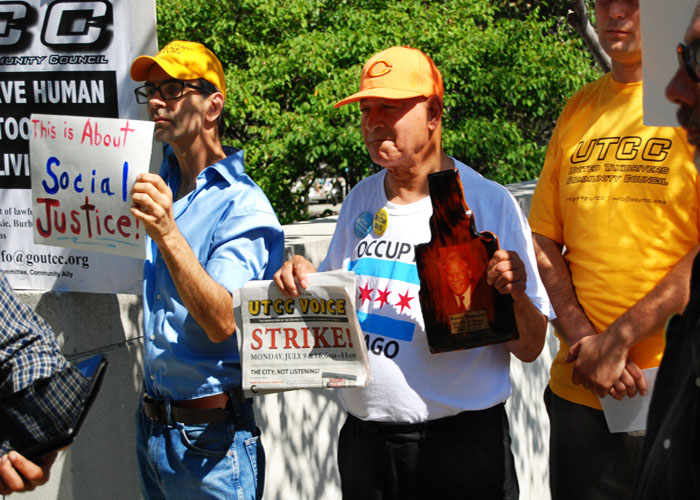 Supporters of the cab strike listen during a press conference called by UTCC on Monday.