Officials throughout the city define homelessness differently, causing some confusion in determing the annual number of homeless in Chicago.

What to call home?

Home and back again

One woman struggles to find stable housing for her family. 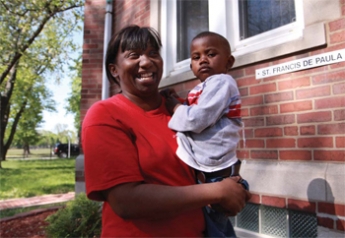 The waste of Chicago

A Reporter investigation shows that Taste of Chicago vendors have discarded a ton of food, literally.

The news: Federal Reserve Board Chairman Ben Bernanke predicted this spring that the nation’s 17-month recession could end “probably this year.” Two months later, Fed officials extended the projection to 2010. Behind the news: The housing market meltdown coupled with the foreclosure crisis has disproportionately affected the wealth of minorities, who have less diverse financial portfolios. White families invest 29 percent of their assets in stocks, bonds, mutual funds, trusts, annuities and retirement funds, according to the Federal Reserve Board’s 2007 Survey of Consumer Finance. But the average black and Latino families have invested less than 15 percent in the same areas and instead put a majority of their assets in housing.

Actor looks to expand images of minorities beyond black and white.

The news: With 510 murders, Chicago saw a 15 percent increase in homicides in 2008–”the biggest increase in more than a decade. Behind the news: In 2008, “index crimes” rose 4 percent from the year before, marking the first increase since 1995, the earliest year for which the data are kept on the Chicago Police Department’s Web site. Violent index crimes–” aggravated assault, criminal sexual assault, murder and robbery–”increased by 3 percent, while property index crimes–”arson, burglary, motor vehicle theft and theft–”rose by 4 percent. The index crimes rose most on the North Side, with nine out of the 10 districts with the largest increases located on the North Side. The exception was District 15, which covers the West Side’s Austin neighborhood and ranked eighth highest in increases.

King streets as diverse as nation

The news: On Jan. 19, Martin Luther King Jr.’s birthday is celebrated for the 24th time as a national holiday. Behind the news: There are an estimated 800 streets in the United States named after the civil rights leader, including one dedicated in Chicago shortly after his death in 1968, said Derek Alderman, an East Carolina University geography professor who has studied the subject extensively. But what’s happening on those streets varies greatly when considering race, economics and crime. In Portland, Ore., for example, King streets are gentrifying and losing their cultural richness, said Jonathan Tilove, author of “Along Martin Luther King: Travels on Black America’s Main Street.”

Advocates use technology to prevent HIV and AIDS among youth.