Long before the disputed election count in Florida, the year 2000 witnessed another rancorous feud over numbers. Chicago officials and the U.S. Census Bureau sparred over who was at fault for the city’s sluggish start to the 22nd decennial census. Less than 52 percent of Chicago households had mailed in their census forms by late April, worse than the 54.3 percent mailed back a decade ago. Mayor Richard M. Daley, who claimed Chicago’s 1990 undercount cost the city $200 million in federal aid, rallied city workers June 1 and asked them to promote the count on weekends, evenings and during their lunch hours. Despite the late blitz, the languid responses continued.

Sandra Otaka was widely praised for her legal and community work long before she became a Cook County judge. But “her first priority is that she’s Jeffrey’s mom, and that’s what’s so powerful about her,” says Linda Lu, president of the Asian American Bar Association of Greater Chicago. (Photo by Christopher B. Santiago)
Sandra Otaka wasn’t going to leave anything to chance. It was March 19, the day of the Illinois primary election, and she was running for Cook County judge against six other candidates. Otaka had already been serving as a judge for nearly two years, since she was appointed to fill a vacancy. 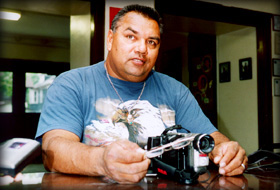 Marilyn Miller was 12 when she and her family arrived in Chicago’s Uptown neighborhood during the hot and muggy summer of 1967. Looking for better job opportunities, they moved from the Lac du Flambeau Chippewa reservation in northern Wisconsin under a federal program known as relocation that offered stipends to American Indians who wanted to move from reservations into cities starting in 1952. The family moved into an apartment at 4939 N. Broadway St. But Miller was disappointed with her new home. “The quality, the area, the look didn’t match the idea of what I had.

Jeff Abbey Maldonado (Photo by Mary Hanlon)
Jeff Abbey Maldonado was 19 when he started looking for books that would help him understand what it meant to be Native American. The problem was that he couldn’t find anything about contemporary people like him, living in a city like Chicago. “We have all this history, but what about information and writings on what we’re like today–”what we do and how we live?” said Maldonado, 32, whose mother was a member of the Alabama Coushatta tribe and whose father was Mexican. “I really didn’t have anybody I could talk to about [it].

Marilyn Miller (Photo by Mary Hanlon)
It is important to Marilyn Miller that her children understand, maintain and participate in their Native American culture. “It’s up to us to protect our cultural integrity,” she said. “We have to stand up and quit playing the victim role. We must become more active and initiate getting the services we need.” Miller, 47, whose Chippewa name is Wabanongakwe, has been coming to events at the American Indian Center in Uptown for 35 years.

A Cherokee Alphabet, a Muslim Slave and a New National Culture

In 1828, President John Quincy Adams wrote in his diary about meeting with a group of Cherokee Indians to negotiate a treaty. He was impressed with an elder member of the tribe named Sequoyah, who had created an alphabet for the Cherokees’ spoken language. Adams wrote that Sequoyah had rendered a great service to his people in “opening them to a new fountain of knowledge.” Jill Lepore cites the diary entry in a profile of Sequoyah in her latest book, “A is for American: Letters and Other Characters in the Newly United States.” The book also includes profiles of six others–”including a freed slave named Abd al-Rahman Ibrahima–”who used language to help shape the nation’s cultural identity.

‘The People are the Church’

In 1996, 18-year-old Mario Ramos, a popular member of St. Nicholas Catholic Church in Evanston, shot and killed another teen-ager under orders from a street gang. The incident galvanized the church’s Latino community, which makes up about 15 percent of the 1,300-member congregation. St. Nicholas formed a committee to discuss ways to prevent other kids from following Ramos’ fate.

Belmont Cragin, once mostly made up of Polish Americans, has undergone a quiet but dramatic change, becoming predominantly Latino.