Over the past year, administrators have been quietly reorganizing the Office of Professional Standards, the police agency charged with investigating citizen complaints of police abuse. 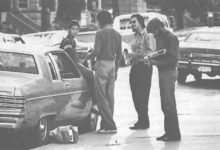 An analysis of police records by The Chicago Reporter shows that in the first half of this year there were 97,221 disorderly conduct arrests in Chicago. The analysis also found that those arrests are escalating most rapidly in predominantly black police districts.The sharp increases are particularly significant in light of the charges of police harassment and brutality from residents and leaders of the city’s minority neighborhoods.