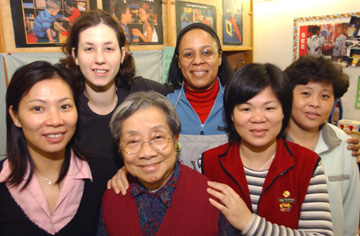 Putting the pieces together

The curriculum at the Love Learning Center, a state-subsidized child care center in Washington Park, is standard preschool fare: learning the alphabet, identifying numbers, building gross motor skills and the like.

Now, though, teachers are paying closer attention to how well youngsters learn those skills and are ready with new activities when they falter.

“We now have a guideline and benchmarks to gauge how well our kids are doing,” says Burchell Love, the center’s owner and director. “And when they are not doing well, we’ve learned all these creative ways to help them. If a child can’t walk a straight line, we create a contest, we’ll take walks around the block. Our curriculum has gotten much more interesting.”

The change came with a $75,000 infusion this year from the Chicago Public Schools (CPS) that allowed Love to hire a certified teacher with a specialty in early childhood education. The money also opened the door for her other staff members to participate in monthly professional development sessions conducted by CPS.

The money that CPS funneled to Love comes from the $50.8 million it receives from the state for programs aimed at preschoolers who lag in school readiness. By sharing these state pre-kindergarten funds with private day care and community-based Head Start centers, CPS is seeking to increase the number of children who come to kindergarten ready to learn.

“We are serving kids at a different setting, but they are still CPS kids,” says Christine Ryan, manager of CPS’ community partnership program.

“The percentage of 3- to 5-year-olds in child care and family care setting is overwhelming,” notes Roseanna Ander, a program officer at The Joyce Foundation, which has made preschool a priority. “One of our emphases is integrating early child care into education programs. Physically, it can’t be just in schools.”

CPS formed its first child care partnership 15 years ago, signing contracts with seven agencies. Today, it has contracts with 71 agencies, making it a leader not only in Illinois but also in the nation.

“Chicago has done a much better job than some other places,” says Anne Mitchell, president of Early Childhood Policy Research in Washington, D.C. “They get it. The attitude is ‘We are trying to make things better for all kids, not just the kids in our schools.'”

With the academic push of the federal No Child Left Behind law, Illinois school districts increasingly are looking to bolster child care services that their communities provide for poor children, says Portia Kennel, vice president for Program Development and Training at the Ounce of Prevention Fund.

Nancy Shier, a director at the Ounce of Prevention, says their organization encourages other Illinois districts to look at Chicago as a model.

The practice of school districts contracting with private agencies is one attempt to break through the bureaucratic walls that have kept different kinds of preschool programs—subsidized child care, Head Start and state pre-k—separate and unequal.

The Balkanization is an historical artifact. Subsidized child care programs appeared in the early 1900s as a social service organized around low-income, working-class families, who needed day care for their youngsters. At the time, the purpose was to provide a service to parents, not to educate children.

Child care centers rely on state subsidies and co-payments from parents to survive. The reimbursement rates can be as low as $24.34 per day, per child. As a result, the centers cannot afford to pay their teachers very much. Reflecting this reality, the state requires only that teachers have one year of child development experience and 30 college credit hours, including six in child development.

In the 1960s, the federal government created Head Start to help communities meet the social and educational needs of disadvantaged preschoolers. Offered mainly through community organizations, Head Start initially had similarly low requirements for teachers, but it is beginning to upgrade them. Last year, 50 percent of Head Start teachers were required to have associate’s degrees.

Then in the 1980s, states began to launch state-financed pre-kindergarten programs for youngsters who were considered at-risk of educational failure due to poverty or other socioeconomic factors. In Illinois, it is the only preschool program that requires teachers to have a bachelor’s degree and an early childhood (Type 04) teaching certificate.

Since then, evidence that children advance more quickly when they are in preschools staffed by certified teachers has grown.

Researchers at the University of California at Berkeley recently reviewed eight studies on teacher quality and pre-k programs conducted across the country. “These reports and studies all echo the same message,” says Marcy Whitebook, director of the university’s Center for the Study of Child Care Employment. “Pre-k teachers who have at least a bachelor’s degree, coupled with specialized training in early childhood development [or] education, provide the best preparation for pre-kindergarteners’ advancement to the next level.”

The review was sponsored by the Trust for Early Education, a national advocacy group.

While early childhood education advocates would love for all preschools to have certified, specialized teachers, they know that is now unaffordable. Instead, they are pushing what they call blending, or using state pre-k money and its requirements to upgrade the other programs.

This year, Chicago received an additional $11 million from the state for early childhood programs. Of that, $7 million is being used to blend funding with child care programs.

Christine Ryan says CPS plans to add 67 classrooms this year, bringing the total to 341. CPS has another 364 state pre-k classrooms inside the system.

CPS lines up partners with a request-for-proposal process. It asks agencies to apply and then screens them on a variety of factors, including whether they are in underserved areas, the quality of their programs, and whether they have the capacity to implement their proposals.

“We are not funding full programs,” says Ryan. “This is an enhancement grant.”

Once CPS has selected its partners, it counsels them on how to screen for students and hire staff according to state pre-k guidelines. Each center hires its own staff. Ryan says this creates a buy-in from staff and shows them CPS is not trying to take over.

“If we just stick one of our teachers in their program, that ruffles feathers,” Ryan explains. “We give them the dollars and let them recruit. Maybe there’s someone on their staff that is interested in getting that 04 certificate. We truly want this to be a community program.”

Indeed, the next challenge is for the state to produce more certified early childhood teachers. The state has 14,392; of those, 4,650 are in Chicago.

“We know [centers] are having problems getting staff,” says Ryan. “Child care centers are not just competing with CPS for teachers, but also among themselves.”

Advocates see blending as a stop-gap. The long-term goal is to create a universal preschool program in the state and make high-quality, affordable preschool programs available to any family that wants it. Last year, more than a third of the state’s 3- and 4-year-olds, about 148,500 children, were enrolled in government-funded preschool or child care programs.

Such a program could also require all early childhood teachers to have bachelor’s degrees and Type 04 certification. (See Catalyst, April 2003.)

“For years, child care and the education system have been so far apart,” says Tom Layman, who heads the Chicago Metropolitan Association for the Education of Young Children.

Layman says one reason is that the programs were created for different reasons. Because of that, there is a perception that programs in Chicago public schools are better than programs in the community.

“But programs should be complementary and not competitive,” says Layman. “And there should be enough quality programs available to meet the needs of all working families.”