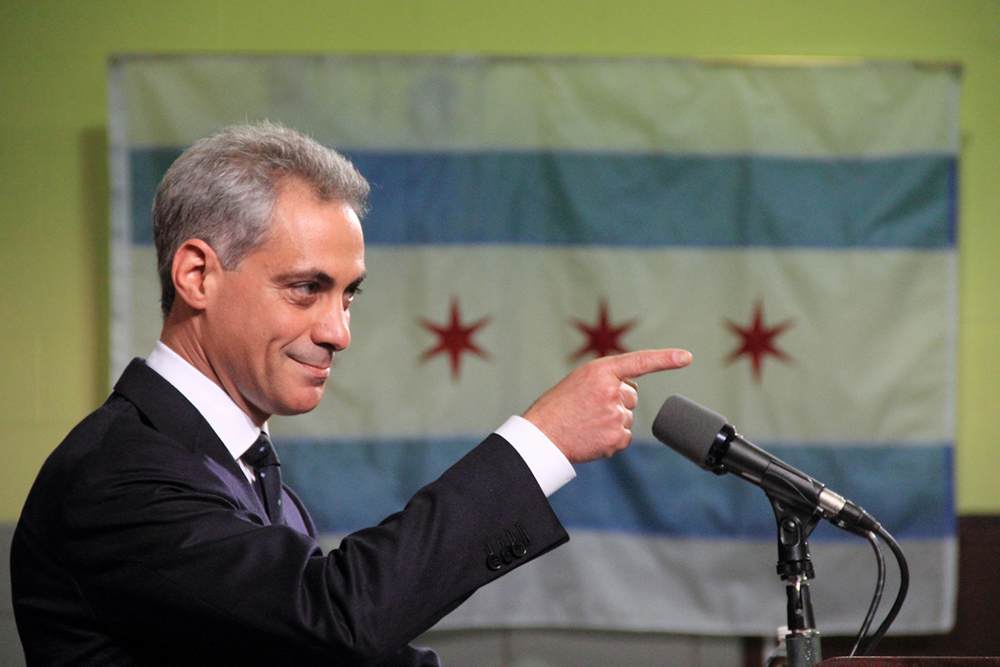 It’s an axiom of modern American politics (or it damn well should be) that the more money is poured into an election, the lower the quality of the discussion.

Rahm Emanuel’s attack ads may have succeeded in depressing Chuy Garcia’s poll numbers, though those polls were way off in the February election.  But the ads have done so not by clarifying differences but rather by muddying the record — and even falsifying it.

There’s the ad that claims Garcia has made $1.9 billion in promises, a totally fabricated number, the great bulk of which hinges on blatantly mischaracterizing his position on pensions.

A Chicago Forward ad builds on this fabrication, featuring a retired police officer who’s worried about “politicians like Chuy Garcia” making “all these billions of dollars of promises” and “raising property taxes and parking taxes” (both taxes Emanuel has raised). He worries that such promises mean more tax hikes or “devastating cuts to city services, like police.”

What the ad obscures, of course, is the fact that it’s Garcia who calls for more police – starting by using savings from reduced overtime — while the number of beat cops has actually declined by significant numbers under Emanuel.

For an Emanuel ad distorting Garcia’s position on school closings, the online news program The Young Turks has done us the service of showing the ad alongside the entire statement by Garcia from which it draws.  The Emanuel production not only takes Garcia’s comments out of context, it essentially falsifies them.

Emanuel’s latest line of attack accuses Garcia of “mismanagement” when he headed Enlace Chicago.  It’s featured in a recent ad, and in Tuesday night’s debate Emanuel even brandished a copy of the group’s tax return — as In These Times points out, an obvious diversion from the much larger issue of Emanuel’s “pattern of fiscal recklessness.”

At issue is the group’s budget, which ran deficits running into the hundreds of thousands of dollars for a couple years during the Great Recession.  The mayor and the media have made much of this.

But the fact is that many nonprofits ran deficits in those years, especially those like Enlace that were providing services under state contracts while state payments lagged dramatically.  Cash flow was a major challenge for many groups.

Indeed, the fact that Enlace survived and went on to prosper is a clear testament to Garcia’s fiscal stewardship.  Many groups didn’t survive, including large, well-established organizations like Southwest Women Working Together and Southwest Youth Collaborative.

It’s thanks to Garcia that Enlace today is doing the work it is, which nonprofit leaders describe as “groundbreaking” and “cutting edge.”

The group works with CPS at eight community schools — the largest group of community schools in any of the city’s neighborhoods — serving 5,000 families from 3 p.m. to 8 p.m. with after-school tutoring for students and GED, ESL, and health programs for adults.  The group’s Little Village Youth Safety Network brings together hospitals, churches, community-based nonprofits and police to identify the highest-risk 5th-through-8th graders and provide them with mental health, family counseling, mentorship and community engagement programs.

In many ways Enlace’s work offers a model for how Chicago could deal with some of its most difficult problems.  But a $30-million war chest allows Emanuel to twist this stellar accomplishment into a liability.

With boundless resources for opposition research, it’s pretty remarkable how little the Emanuel team has come up with from Garcia’s long public record: a vote for Harold Washington’s budget in 1987, a vote for Jim Edgar’s budget in 1997, an error on a property tax exemption of the kind shared by thousands of Illinoisans (including Bruce Rauner and Patrick Daley Thompson). And some deficits at a nonprofit during a huge recession.

There’s something wrong with a political system that allows an electoral debate to be manipulated so brazenly.  And what’s wrong, as we all know, is the inordinate role of big money in our elections.  Indeed, last year political scientists released a study examining public decision-making in the U.S., which concluded that we are no longer a democracy.

Emanuel thought “He could do whatever he wanted — he could close schools, he could break promises about police, he could just tell people what to do, he could threaten aldermen — because he controls the money,” said County Clerk David Orr, who is co-chair of Garcia’s campaign.  “He didn’t have to worry about the truth. He could control the airwaves and shut other voices out.”

It didn’t quite work out that way.  Thanks to Chicago voters — and thanks to community and labor activists who have persistently put forth an anti-austerity agenda — Emanuel now faces a challenge he never expected.

There are huge issues at play in this election.  The role of money in politics is certainly one of them.  The capacity to raise enough revenue to run government effectively, after decades of tax cuts for corporations and the wealthy, is another. And with a mayor who came in gunning to break the Chicago Teachers Union, who’s backed by some of the most prominent anti-union figures in the state, the future of the labor movement — particularly prospects for a labor movement that speaks to larger concerns about social and economic justice — is one more.

But those kinds of issues aren’t helpful for Emanuel, to say the least.  He’d rather change the subject.