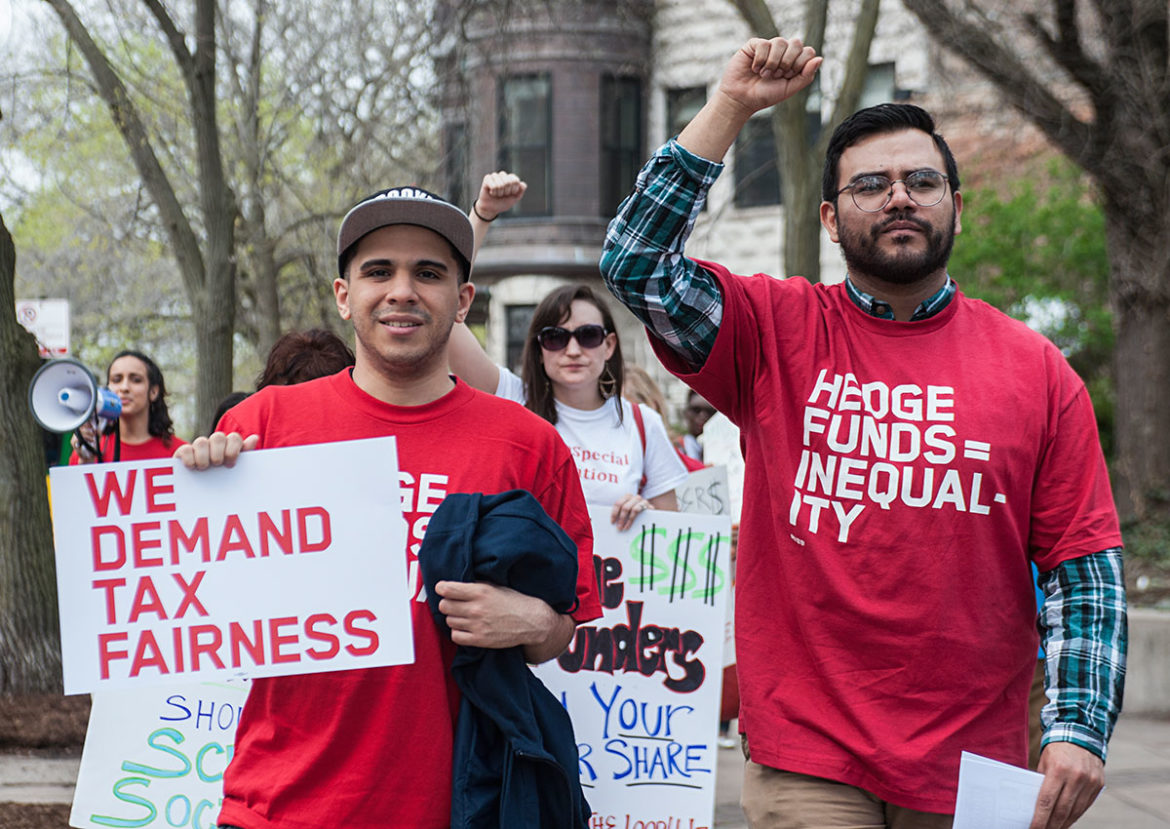 Groups demanding an end to the state budget impasse and school funding crisis visit the homes of wealthy political contributors to Gov. Bruce Rauner and Chicago Mayor Rahm Emanuel in a “tax evasion trolley tour” organized by the Grassroots Collaborative.

Social service agencies and public universities in Illinois are on the verge of collapse – while super-wealthy hedge fund and private equity managers (including Bruce Rauner and his top donors) evade millions of dollars in state taxes through an archaic loophole.

Legislation currently under consideration in Springfield would close that loophole and raise at least $473 million a year – perhaps much more – by effectively requiring the titans of high finance to pay income taxes the same way the rest of us do.

At this point it may actually be the most likely prospect for a legislature trying to do something about the state’s budget crisis.

Hedge funds and private equity firms charge enormous performance fees, typically taking 20 percent or more of investment gains.  But they list these fees as investment income – even though the income is from investments made with other people’s money.  That allows them to pay federal capital gains tax on the money, with a top rate of 20 percent, rather than ordinary income tax, which tops out at 39.6 percent.

It’s called the “carried interest” loophole.  The term actually dates to the 16th century, when ship captains would take 20 percent of the profit from the sale of goods they carried; the tax itself was originally created for oil companies nearly 100 years ago.

Based on the limited tax filings he’s released, Gov. Rauner seems to have taken extensive advantage of this loophole.

The loophole costs the federal government at least $18 billion annually, according to Hedge Clippers, a national advocacy group.  Many tax experts consider this an illegitimate loophole.  It doesn’t make any economic sense – these are not “job creators” who are being encouraged; particularly in private equity, their “destructive” business model involves taking over companies and “outsourcing, cutting jobs, cutting pay, cutting pensions and benefits,” said Michael Kink of Hedge Clippers.

Last year presidential candidate Donald Trump promised to eliminate the carried interest loophole (as did Bernie Sanders, Hillary Clinton and Jeb Bush), but with his administration heavily populated by Wall Street bosses, it now looks like another broken promise.

Nor is Congress likely to act.  Since an effort to eliminate the loophole in 2007, hedge funds and private equity firms sharply ramped up political donations.  They’re now the top donors to Senate Majority Leader Mitch McConnell and House Speaker Paul Ryan.  Instead of paying taxes, these guys buy politicians.

So reformers have taken the fight to the states.  Legislation “repatriating” revenue lost to the federal loophole has been introduced in six states.  It’s farthest along in the three states with the largest concentration of hedge funds and private equity firms: New York, Connecticut and Illinois.  In those states, bills are sponsored by majority party members in each house, and the bills are getting hearings, Kink said.

In Illinois, identical bills sponsored by State Sen. Daniel Biss (D-Evanston) and State Rep. Emanuel “Chris” Welch (D-Hillside) would charge a “privilege tax” of 20 percent on partnerships engaged in investment management services until a federal law with an identical effect is enacted.

Based solely on public filings, Hedge Clippers estimates the bill would raise $473 million a year.  The Illinois Department of Revenue estimates that the tax has the potential to raise $1.7 billion a year – but the department also argues that the tax would incentivize firms to find new ways to evade taxation or to “relocate taxable activity so it is beyond the reach of the state.”

Welch said he considers this argument a “scare tactic.” “This is what they always say,” he said.  “Chicago is a world-class city, and LaSalle Street is a world-class financial center.” Global financial firms are located in a small number of cities around the world – places where they have access to the talent, clients and ancillary services they need.  “That’s the reason they are here,” said Welch.  “They’re not going anywhere.”

Welch insists “this is a fair tax” and “a reasonable option.”  “These guys need to do a little more to help solve the problems of the state.  They should pay their fair share.”

Kink points out that other kinds of investment firms don’t get this tax break, and they remain in Chicago.  “I don’t think it’s a credible threat,” he said.  Academic research – and experience with tax surcharges on millionaires – has demonstrated that marginal tax rates aren’t a factor in locating business operations, he added.

In addition, the bill is fashioned as a compact: The tax won’t take effect until New York, New Jersey and Connecticut pass similar measures. [This provision was removed in committee from both the House and Senate versions of the bill.]

You might expect that Gov. Rauner would veto the bill.  And well he might.  But he’s heading into a tough re-election campaign, with precious few accomplishments to which he can point.  And he’s got to imagine the potential commercials attacking him for vetoing a measure that would have required millionaires and billionaires – himself included – to pay the same taxes that teachers and truck drivers pay.  “It kind of puts him on the spot,” said Kink.

Imagine Rauner taking the moral high ground, calling on his fellow tycoons to pay their fair share – and even to set aside the kind of tax-evasion strategies that aren’t available to the rest of us.

He can afford it, and so can his friends.  And soon enough Illinois voters will be deciding whether they can afford Rauner.

This story has been updated since publishing.