Nearly one in four black male students in Chicago Public Schools was suspended at least once last year, a rate that is twice as high as the district average.

This finding is also part of an upward trend that has resulted in a near doubling of the number of suspended students over the past five years, according to a Catalyst Chicago analysis.

While districts across the country report student discipline data in slightly different ways, the analysis of 2008 data shows that CPS has one of the highest rates of suspension among big-city school districts—putting students at higher risk of failing courses and dropping out because of the strong correlation, borne out by research, between school attendance, grades and graduation.

The racial disparity for African-American males is even starker with expulsions, which are also on the rise. More than 60 percent of expelled students last year were black boys, up from 53 percent just five years ago.

District officials have long said they are committed to eliminating the achievement gap for black boys. At the same time, data show that black male students are hardest hit by punitive discipline that affects their academics:

The statistics have stunned local and national educators and youth advocates, who say the disparity may warrant investigation by the Office of Civil Rights in the U.S. Department of Education.

Peter Cunningham, assistant secretary for communications and outreach under Secretary of Education Arne Duncan, says the department is interested in having all students treated “fairly and equally.”

“Any time there’s a disproportionate impact on any one group of students, the Department of Education is concerned,” Cunningham says. As Schools CEO in Chicago, Duncan realized the problem of excessive discipline and pushed for alternative strategies, such as peer juries to get students involved in meting out punishments that would keep those who misbehave in school. But the ideas have yet to take root, and suspensions and expulsions have continued to rise.

National leaders are showing signs of tackling the issue of punitive discipline, which isn’t addressed in the No Child Left Behind Act. The Illinois State Board of Education requires reporting, but does not impose sanctions for excessive discipline and has not instituted guidelines for determining when suspension or expulsion is warranted. At the recommendation of a state task force, ISBE has begun to take aim at classroom management by calling on districts to adopt the Positive Behavior Intervention System (PBIS) to track student misbehavior and reward them when they do well.

But for the most part, student discipline has flown under the radar in CPS, despite the potential long-range academic consequences—a situation that is particularly troubling for black boys, who are most likely to drop out.

Local experts say they are deeply dismayed to learn that suspensions and expulsions are so high, especially for African-American boys. In 2006, youth advocates convinced CPS to scrap zero-tolerance in favor of an approach called restorative justice, in which schools work with students to help them take responsibility for their actions and make amends. Restorative justice, proponents hoped, would lower suspensions and expulsions and keep students in school.

Robert Spicer, director of programs for Community Justice for Youth Institute, says that as a black man who spent eight years teaching in CPS, he is not surprised that black boys are suspended and expelled more often. He questions whether teachers and administrators truly believe that educating black male students is important.

“The district continues to fail them,” Spicer says.

Lori Turner, a staff attorney for the American Civil Liberties Union in Chicago, says CPS is moving in the wrong direction, since “education experts agree that there is a direct correlation between suspension and outcomes.” Turner cites a 2001 report by the Coalition for Juvenile Justice, a national nonprofit representing state juvenile justice advisory groups, which found that a student who is suspended just once is three times more likely to drop out of school.

Barbara Eason-Watkins, CPS’ chief education officer, declined to address the racial disparity. Overall, she believes the higher numbers are the result of better reporting, not more suspensions. Only in recent years has reporting become more reliable, Eason-Watkins says, as the district’s computer system has improved.

In addition, school principals largely determine what happens on their campus. “At the district level, we are really trying encourage schools to more responsive to the social and emotional needs of students,” she says.

Sources familiar with the data, inside the district and at the Consortium on Chicago School Research, say they suspect that the 2008 figures still reflect an underreporting of suspensions. They point out that there is a disincentive for principals to report the information, and that some schools provide more accurate information than others
But the spike in suspensions is troubling even if it does stem only from better reporting, Turner says. Not only has the district been providing the state with grossly inaccurate information, but it has also failed to monitor and address the issue properly, she says.

Meanwhile, the message to students is not good.

Ronald Ferguson, a senior research associate at Harvard University’s Malcolm Wiener Center for Social Policy, tells the story of a boy in a dropout program who explained how he felt about the different reactions of his teachers to misbehavior. One of his teachers gave him extra work and sat by him to make sure he knew how to do it. Another one just sent him out of the room.

CPS does not report data by race and gender documenting why students were suspended or expelled. But an analysis of school-level suspensions shows that black boys are more likely to be kicked out of school no matter where they are enrolled. The risk is greatest at all-black and predominantly black schools, where the overall rate of suspensions and expulsions is highest. And at mixed-race schools, where black male students comprise just 12 percent of enrollment, they make up 30 percent of those suspended and 54 percent of those expelled.

Examining the reasons for suspensions and expulsions, and whether those reasons are different for black boys than for other groups, is important in determining unfair treatment, says the ACLU’s Turner. But “the numbers alone are troubling,” she says.

Even if discrimination is not overt, there’s no question that racism is a factor, says Daniel Losen, senior education law and policy associate for the Civil Rights Project at the University of California-Berkeley.

While CPS is tackling the problem indirectly by encouraging schools to adopt social and emotional curricula to address behavior problems, a national initiative, called Dignity in Schools, is taking shape.

Turner is part of that national campaign, whose members have written to Secretary Duncan to urge him to target federal stimulus money toward programs that promote alternatives to suspension and expulsion. Turner says the group also talked with Duncan’s assistant secretary in the Office of Civil Rights, Russlynn Ali, who supports the idea. Stimulus guidelines state that districts can use the money on alternative programs.

Udi Ofer, advocacy director for the ACLU in New York, says that Dignity in Schools wants to bring the issue of punitive discipline to the forefront of national discussions on education reform.

Discipline is a big concern in New York, too, and Ofer contends that suspensions have at least doubled in the city’s public schools since Mayor Michael Bloomberg took control of the district in 2002. Ofer suspects that schools under-report the numbers, and his office is now combing through data that they hope will give them more accurate information. Ofer is also lobbying on behalf of a state bill he wrote that would require more transparency on school discipline.

(Another concern in New York is the rising number of school security guards, who are unarmed but authorized to arrest students.  The number is now 5,100, up from 3,600 in 2005.)

Excessive discipline in schools is the first step for young men of color who disproportionately find themselves in prison, Ofer and other youth advocates note. “I see this as one of the greatest civil rights issues of our generation,” he says.

Losen notes that high rates of suspension and expulsion are the end result when schools are poorly funded and lack supports, such as extra counselors, to help misbehaving students. Teachers do not receive adequate training in how to de-escalate tense situations, Losen adds, and “they feel more desperate, like they are not able to do what they were trained to do”—teach.

The Chicago Teachers Union wants principals to intervene early and attack the root of behavior problems before students need to be suspended, says Rosemarie Genova, spokeswoman for the CTU.  “In some schools, when students act out, it is not addressed until it becomes a big problem.”

Eric Carlton, president of Banner Schools, a group of alternative schools, says that parents and students tell him social and emotional issues are hardly considered at their schools because the staff is so overwhelmed.

“When [schools] encounter a student with emotional problems, there’s a concern that [the student] will set the tone for every one else,” Carlton says. “The most expedient step to take is often to suspend or expel.”

Carlton, who was a principal in Houston, says school leaders cannot just abandon the use of suspension and expulsion, since doing so could lead to a chaotic environment where students don’t take rules seriously. The key, he says, is to find balance.

As CPS CEO, Duncan gave the Chicago Area Project a grant to implement restorative justice in six elementary schools, as a way to restore balance to discipline. But the program has yet to get underway in many of the schools, says Edith Crigler, president of the project, who says she’s met with resistance from teachers and principals to such programs.

“Here it is at the end of the school year, and we haven’t started,” Crigler says in May. “The schools can’t conceptualize how it would work. And they have so many other problems that they are dealing with. They just don’t know how to get behind it. Restorative justice might be in writing, but there is no mechanism to implement it.”

Teachers often fail to see how these programs can help them as opposed to providing more work for them, she explains. Some of them are veterans and from the old school of discipline, demanding quiet students who fall in line. Other teachers are from vastly different cultural backgrounds and can’t relate to students, assuming the worst too quickly when misbehavior erupts.

Either way, Crigler says she’s tired of talking to students and parents who complain about suspensions that seem, on the surface, to be unwarranted. Whatever the reasons, she notes, “students cannot learn if they are not in school and not in a supportive environment. 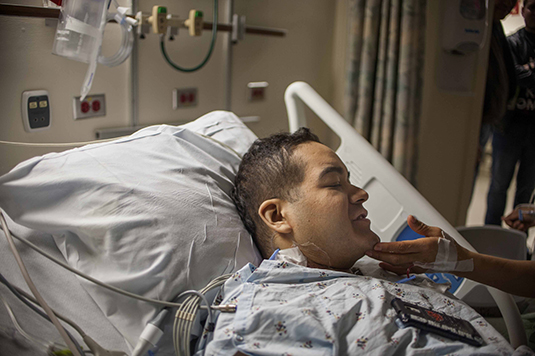 Mariscal thanks his mother for her donation.