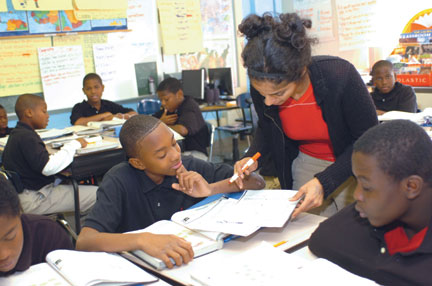 The 7th-graders in Nikkol Palmer’s classroom at Mays Academy are quiet and respectful as they slowly trickle in, take their seats and open their textbooks to the short story they’ve been reading.

“OK, what was the last event in the story? Where did we leave off?” asks Palmer, who teaches language arts and social studies. The story, “Rikki-Tikki-Tavi,” tells the adventures of a young mongoose who protects his “human family” from a set of deadly cobras.

Hands shoot up to answer. “We stopped where Rikki-Tikki killed Nag (one of the villains in the story),” says one student. As Palmer begins to read, every student pays rapt attention, their heads in their book.

In the course of the reading, they laugh aloud at the funny parts and answer questions from Palmer, such as “What does ‘cunningly’ mean?” “What do you think will happen next?” What is ‘personification?'”

In this class, participation and attention are the order of the day, in part the fruit of Palmer’s efforts to keep her students engaged. But there’s a twist that makes the orderly behavior more remarkable: All the students in her class are boys.

“Oftentimes, boys at this age don’t want to participate, especially black males,” says Palmer. “It is considered nerdy or lame to show you are smart. And around girls, well they are like ‘Let me be the class clown to impress them.'”

Girls have similar issues at this critical age: Their bodies are changing and, like boys, they are trying to fit in and gain a sense of belonging with their peers.

Students are also more likely to engage in social aggression, says an expert on early adolescence.

“You see a little bit of an increase in bullying and peer harassment at this time,” says Stacey Horn, an associate professor at the University of Illinois at Chicago, who teaches new teachers how to work with middle-school students.

Some proponents of same-sex education believe that single-sex classrooms cut down on the behavior problems that crop up with young adolescents. Mays Principal Patricia McCann is one of them, and spearheaded the school’s switch to single-sex classrooms at the middle grades six years ago. The goal: help students focus more on academics and less on each other.

At Mays, middle-grades students now outperform their counterparts in other Englewood schools and school leaders attribute the gains primarily to single-sex classes. (The school has also adopted a year-round schedule to keep students on track academically.) And boys are outshining the girls, the school says, even though historically, girls do better in school.

“We don’t have ISAT scores broken down by sex, but we looked at classroom grades and [the boys] were better than our females,” says Principal Patricia McCann. “All our boys are also being accepted at the better schools—Whitney Young, Kenwood, Urban Prep Academy.”

The boys are more likely now to ask questions in class, says Palmer. “They are not afraid to inquire because they’ve gained confidence. They are competitive with each other and they are trying to be the smartest in the classroom. They give me a run for the money.”

As a middle school teacher at Schiller near the Cabrini-Green public housing development, McCann had to constantly redirect her pre-teen students to keep them on track with the lesson.

“They were noticing each other. They were distracted,” she says. “The girls were doing what they see women do. I’d have to keep them off the boys. And the boys were becoming stimulated and didn’t know how to stop it or what to do about it.”

To add to the problem, McCann says students live in a society that is very sexually charged. “The music is inappropriate, the TV programs and movies, too,” she says.

And students themselves were often treated like adults at home, given charge of younger siblings, and found it hard to turn that role off and step back into “a child’s shoes” once they got to school, she says.

In class, students often didn’t put their best foot forward. The boys didn’t want to speak out for fear of being labeled a nerd and the girls wouldn’t either, she says.

McCann took these observations to heart when she became principal at Mays, creating a separate middle-grades entity, Mays Excel Academy, and grouping students into same-sex classrooms. In addition to providing a better atmosphere for learning, separating students also provides a safe place for students to talk about the physical changes they are undergoing and what is happening in their lives, she says.

“Sometimes in the upper grades we need to talk to students without the boys or the girls listening in [on each other],” says McCann.

McCann has also mulled over whether to assign male teachers to the boys’ classrooms, and female teachers with the girls.

“I’m not sure yet. I’ve thought about it and find myself rethinking it,” says McCann. “Boys need mothering too, and they respect women. And if there are positive black male figures in the building, this is good. Maybe they don’t have to have same-sex teachers.”

The same-sex classes have allowed students to open up and talk about life experiences, regardless of the gender of their teachers.

“They are asking about life questions,” says Palmer. “For instance, we were reading a book called “The War of the Wall,” and the boys talked about territory, and what happens when someone comes into their space.”

Word of the school’s success with its middle-grades students, in particular with its young African-American males, has trickled out into the broader community and attracted parents willing to go out of their way to get their children into Mays.

“I don’t know how they found out, but parents came from other schools to put their children here because, in particular, they’d heard boys do better here,” says McCann. “We get kids from Avenue O [in Hegewisch] and Jeffery Boulevard in South Shore.”

This year, McCann is aiming to do more to help girls at Mays. While the young men have benefited from programs such as the Boys to Men mentoring program, too few similar programs are in place for girls, she notes.

“The boys have blossomed, and before the girls outperformed them,” says McCann. “We are looking at ways to give more support to our girls. Many of them are parenting younger siblings, but they need to know they can go to college and have careers, too.” 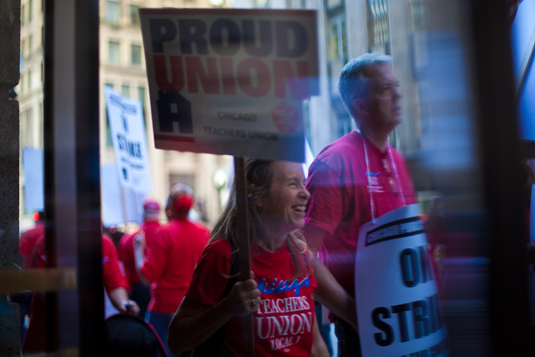 A supporter of the CTU strike is seen through the window of the Chicago Public Schools headquarters. Photo by Jonathan Gibby. 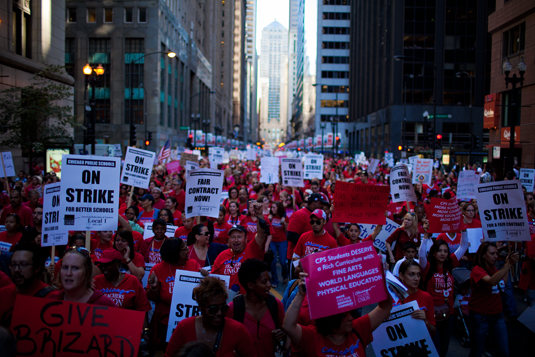 Thousands of demonstrators march toward City Hall during a protest to support the Chicago Teachers Union strike on Sept. 10, 2012.