Veteran educator Marietta Beverly got this telling response when she told colleagues at a seminar years ago that she was the principal of a middle school: “Oh, you poor thing, you!”

“That’s how many people think about middle school,” says Beverly, former principal of Michele Clark Middle School (now a high school) and a retired area instructional officer. “When children get to that level, there are so many things happening to them—their bodies are changing, their emotions fluctuate. They are big little people.” Beverly is now one of two former middle school principals who are coaching principals and providing guidance on how to best help students in these critical early adolescent years.

For students, the middle grades are a landmine that can sabotage their chances for high school success: Performance in math and science typically levels off, attendance drops and students must master more challenging curricula, educators say.

“It is a time of promise and of peril,” says Linda Wing, deputy director of the Center for Urban School Improvement at the University of Chicago. “If we don’t get them right then, we start losing kids at this time.”

Nationally, urban school districts such as Boston and Los Angeles are beginning to understand the need to improve middle-grades education. (See story.) Indeed, a report by the Government Accounting Office released in September shows that a majority of middle school children are not making adequate yearly progress under the No Child Left Behind Act. And U.S. Rep. Raul Grijalva (D-Ariz.) has introduced a bill called the Success in the Middle Act to provide federal support to low-performing middle schools.

Chicago is taking steps in the same direction. Last year the district launched a pilot program targeting middle grades learning in tandem with the related goal to improve high schools, raise graduation rates and send more students to college. On their own, schools such as nationally recognized Marshall Middle School in Irving Park and Mays Academy in Englewood have found creative ways to educate their “tweens.” (See stories on Marshall and Mays.)

The Middle Grades Project focuses on getting schools to departmentalize in grades 6 through 8—that is, have students in subject-specific classes like those in high school—as well as increasing teachers’ content knowledge, especially in math and science. Schools are prodded to use rigorous, research-based curriculum and give students experiences similar to high school before they arrive there.

“Chicago is doing great stuff,” says Debby Kasak, the executive director of the National Forum to Accelerate Middle Grades Reform. “Chicago has been very astute about what it is doing and they are making a commitment to recognize the older learners in a K-8 building.”

The Middle Grades Project began last year with 24 schools in Areas 10, 12 and 13 on the South and Southwest sides of the city. This year, the project added 10 more schools from those areas. The final target: every school in the district.

“[Chief Education Officer Barbara Eason-Watkins] said to us, ‘Let’s use this as a laboratory to see what we can do with all the schools,'” says Michael Lach, former director of math and science, which had oversight for the project. (Lach has since joined the Office of High School Curriculum.)

The project is driven by three principles, chosen based on research spelling out what middle-grades education should look like.

First, middle-grades education should be academically rigorous. To that end, schools need to have teachers on board who have endorsements in math and science (most elementary teachers do not have degrees in those subjects), and the curriculum should be engaging and challenging.

Second, school leaders and teachers need to understand the dynamics of early adolescence and be trained to meet the social and emotional needs of these students.

Third, students should be exposed to high school-type experiences, such as juggling multiple classes, early on. Part of that exposure should include taking algebra, another goal of the project.

Nationally, 40 percent of students take algebra by the 8th grade; in CPS, only 7 percent do, CPS officials report. Passing this course, the gateway to higher math, is considered key to students’ prospects for college. In fact, statistics show that when students fail algebra, they are less likely to graduate from high school.

To support the project’s work, CPS approached the Chicago Community Trust and received a $2.45 million grant.

“The district talked about what they wanted kids to do after high school, but students who don’t do well in algebra often don’t graduate and go to college,” says Gudelia Lopez, a senior program officer at the Trust and a former administrator in the CPS Office of Post-Secondary Education. “The key piece is that teachers didn’t have content knowledge or an endorsement in math and science.”

Indeed, most of Chicago’s elementary schools are K-8, with self-contained classes taught by one teacher. Often, math and science are not taught well this way, CPS officials note, because teachers are not specialized in those two subjects. (The district has just 16 middle schools.) Among elementary teachers, only 5 percent have a math endorsement and only 6 percent have a science endorsement.

Many teachers don’t feel comfortable with math and shy away from it. “People have learned mathematics as a list of rules to be memorized,” says John Baldwin, a professor who runs the math program at the University of Illinois at Chicago, where CPS teachers from schools participating in the Middle Grades Project are undergoing training to teach math. “They fear being asked to think about mathematics.”

The same could be said of science.

With the Trust grant, teachers in the pilot project are returning to school to get math and science endorsements. Classes in the sciences are being taught at Loyola University and math classes, in particular algebra, are being taught at UIC. The district’s goal is to have at least one teacher endorsed in science and a teacher endorsed in math in each school in the pilot.

“This is moving us toward the ultimate goal of [raising] student achievement,” says Principal Patricia Kennedy. “Our teachers have been very excited.”

At Sherwood in Englewood, Principal Charles McGehee coaxed one of his 4th-grade teachers, whose students were doing well on the science portion of the ISAT, to get an endorsement in science and move up to the middle grades.

“Here was my middle-grades science teacher right under my nose. I called her in, buttered her up and told her she’d never regret it,” says McGehee. “She tried it and she loves it.” Sherwood’s math teacher has also signed up to get an endorsement in science.

In addition to making sure teachers are better-prepared in these core subjects, administrators say that middle-grades success is heavily dependent on the principal and school leaders.

As a solution, CPS hired Marietta Beverly and Rosa Ramirez, another former middle school principal, to provide leadership training to principals whose schools are part of the project. “Principals need to know how to do middle school in a K-8 building,” says Lach.

“We are trying to help principals see their middle-grades students as a group that needs a different type of teacher and instruction,” says Beverly. “We are asking teachers to work together as teams. They need time to plan and meet. Children need rigor in the middle grades.”

“This is a paradigm shift, but principals are excited about it,” Beverly adds.

Once a month, leadership teams from each school—the principal and teachers from math, science, reading and other areas—meet with other schools in the project for professional development, to share best practices and talk about what is working and what isn’t.

“The benefit of being in the project is meeting as a team,” says Katherine Konopasek, the principal of De La Cruz. “There are issues with this age group, and you can meet as a group and talk about them.”

The project covers the costs of substitutes to make it easy for school staff to get away.

Schools must also select a research-based math and science curriculum recommended by the district (curricula for social studies and literacy are in the works) and choose one of four middle-grades schedules, devised by the district, that are similar to a high school one.

“Our children have been going home saying that it is just like high school,” says Principal Janet House of McCorkle Elementary in Grand Boulevard. “They love it.”

“Last year, our first year to do this, we had a problem with our 6th-graders,” says McGehee from Sherwood. “It took them awhile to get the hang of it. But this year, as 7th-graders, they got it. And our 5th-graders had been watching them, so they’ve got it, too.”

The schedules also eliminate the double period of reading adopted under the Chicago Reading Initiative. “At this age, students should be reading to learn, not learning to read,” says Lach.

Reading is still front and center, Lach says, but is incorporated into all subjects.

Other high school experiences are being added, too. Some schools have adopted AVID (Advancement Via Individual Determination), a college-prep program that teaches students how to organize material, formulate and ask questions, improve study skills and take notes. And schools are also adding an advisory period for middle-graders, similar to a division period in high school.

“The plan is to make sure that middle-grades students have ’12 touches’ of high school before they get there,” says Lach. That could also mean high school visits or filling out high school applications.

The Middle Grades Project has yet to devise a comprehensive strategy to meet the social and emotional needs of students. Teachers are encouraged to take adolescent psychology and adolescent methods courses, which are required to earn a middle school endorsement.

“We are still working on this,” says Lach.

Some schools have developed strategies on their own. At McCorkle, middle school students are allowed to sit where they want at lunch instead of having to sit with their class.

“Letting them move from classroom to classroom and sit where they want at lunch is letting adolescents function in a different way,” explains House. “And now my lunchroom is not nearly as noisy as it was.”

McCorkle teachers regularly discuss adolescence, which House says has helped them cope “with the antics of the middle school. You don’t get angry, since you know what it is [stemming from].”

Principal McGehee says he’s learned it is OK for students to be noisy and burn off extra energy, typical behavior with middle school students.

“I taught math years ago and the philosophy then was, ‘Shut up and learn,'” says McGehee. “But my sister taught at Powell and her classroom was always noisy, yet she always won the CPS science fair. So I learned something.”

Meeting students’ developmental needs is as important as academics, says one principal.

“Our staff has been trained in the social and emotional needs of our students,” says Lorraine Cruz, the principal of Ames Middle School in Logan Square (the school is not a part of the project). “It is a must-have for anyone who is teaching middle-schoolers.” 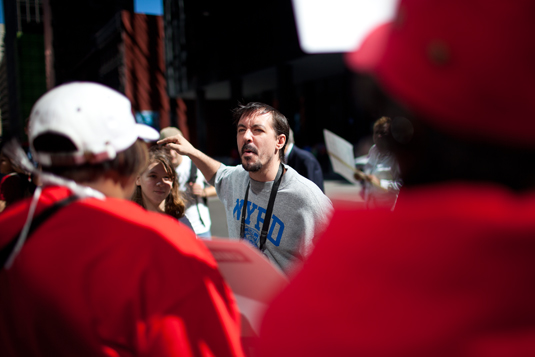 Dan Hensley argues with demonstrators during a rally to support the CTU strike. Hensley believes that teachers are taking classes away from students and wasting the time of the parents and students alike. Photo by Jonathan Gibby.