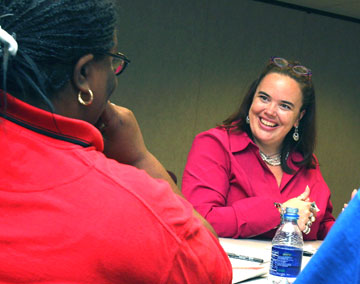 The mix of candidates who want to run charter and contract schools comes primarily from the ranks of universities, nonprofit institutions and leaders within Chicago Public Schools, according to letters of intent filed with the district and a list of attendees from summer training camps for applicants.

Conspicuously absent are for-profit education management companies and private corporations, though Mayor Richard M. Daley made a public pitch to businesses to sponsor schools when he announced the Renaissance 2010 initiative.

“We’re not closing the door on it. We’re not depending on it,” says Greg Richmond, director of new school creation for CPS. Richmond says CPS has spoken with a number of companies, including Edison and Mosaica Education, another New York education vendor. But any for-profit company is required by state law to operate in partnership with a local nonprofit board. Chicago Charter School Foundation currently contracts with Edison and the nonprofit American Quality Schools to operate its seven school sites.

As for the city’s business community, legal powerhouse Sonnenschein, Nath & Rosenthal was the only firm to submit a charter proposal in the round due Oct. 1.

The Chicago Bulls organization had expressed interest in starting a contract school, but backed off. “There was going to be too much risk involved on our end. We were basically getting out of our realm of experience,” says Dave Kurland, director of community relations, who explained that a prime concern was the challenge of finding and keeping a good principal for the long haul.

Most of the education leaders and institutions that want to create new schools already have at least something of a track record. For example, the Umoja Student Development Corp. submitted a proposal for a charter school at the Flower campus in East Garfield Park, which already houses the Al Raby School for Community and Environment. Umoja program director Ted Christians notes that the program has seven years of experience working with students at Manley High School to prepare them for college and careers.

A few CPS teachers are stepping up to the plate, too. Teachers started charters such as Perspectives and Noble Street, and more teachers are taking a look at starting their own schools under Renaissance 2010. Staff from Gage Park High and Sawyer Elementary, among others, attended summer workshops to learn how to apply to start a school.

“The board has come to realize they have to let go a little bit and let their talented teachers perform,” says Daphne Strahan, assistant principal at Arai Middle School in Uptown who hopes to create a new school focused on training minority journalists.

Starting a performance school and having the chance to work with like-minded colleagues “means everything in the world,” says Strahan. “I look forward to the opportunity to work with a community that wants you and believes in you.”