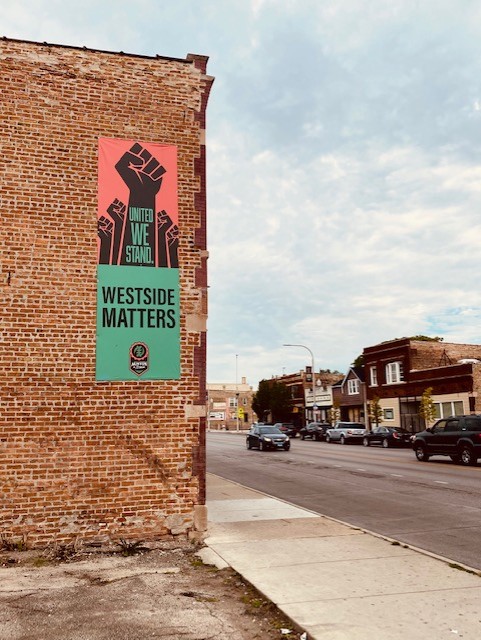 The door opens as a chime announces the entrance of a customer, a woman who approaches the counter window to pick up her order of the Viola strawberry cheesecake. A few minutes later, the door opens again, the chime makes its customary welcome, and another customer makes a pick-up. This time it’s the Pecan Pleasure cheesecake.

This ritual repeats over and over again as it’s 12:30 p.m. on a Thursday at Schweet Cheesecake in what’s known as the Soul City Corridor of Austin; the early afternoon is when the Black-owned bakery is busiest.

Chamille Weddington, co-owner of the West Side bakery, is there to greet the sweet-toothed faithful who come for The Avenue, Chocolate Chip Westside, Moo Moos, and other pastries.

“Community is the real currency of a business,” says Weddington emphasizing her bakery’s sweet success is more than just about the cheesecake, but also collaboration to revitalize her neighborhood peppered with boarded-up former storefronts and abandoned lots.

Weddington, a third-generation Chicagoan, is not giving up on her hometown as new data from the U.S. Census shows Black residents continue packing up and leaving the city that for them – no longer works. According to the Census report released in August, Chicago’s Black population fell by nearly 10-percent, a loss of 85,000 residents over the last 10 years. At just more than 800,000, Black residents now make up about 29-percent of the City, down from more than 32-percent in 2010.

Austin, one of nearly 30 Black majority neighborhoods, lost more than 18,000 Black residents between 1990 and 2016, finds a report by the University of Illinois at Chicago. “I’m not going anywhere,” says Weddington. She says many people leave the City because they have “run out of emotional gas,” referring to the Black community’s historical prejudiced systemic issues.

As is too often, Austin, like other communities on the South and West sides, suffers from decades of disinvestment. Marginalized communities face obstacles  to quality housing, education, employment, and health, pressuring them to search elsewhere for basic needs. That type of neglect is what First District Cook County Commissioner Brandon Johnson says drives residents reluctantly out of Chicago. “Black people aren’t leaving Chicago. Failed policies are forcing them out,” he argues.

“The pathway from poverty to prosperity is entrepreneurship,” says Larry Ivory, president, and CEO of the Illinois State Black Chamber of Commerce. Ivory believes local and state governments must be more intentional in providing resources to small businesses that create jobs and keep wealth in their neighborhoods.

Both point to the persistent adverse outcomes of residential segregation that arose from the Great Migration.

“My father moved to Chicago from Southern Mississippi, only to find the same (discriminatory) conditions he thought he left behind,” says Johnson. “There weren’t literal signs reading ‘Blacks Not Allowed,’ but the barriers existed nonetheless.”

From approximately 1915 to well into the 1970s, more than 500,000 Black residents arrived in Chicago from the seven million fleeing Jim Crow laws legalizing the community’s marginalization.

Many came to Chicago lured by jobs in food processing and manufacturing factories that were in short supply of industrial workers due to World War I, II and the significant reduction of immigration from Europe.

The city’s Black population peaked at just more than one million, 39.5-percent around the 1980 census when the steady evacuation of longtime residents began.

The exodus is often attributed to racial disparities in social determinants of health that were only exacerbated during the coronavirus pandemic.

Black people who historically face many roadblocks in creating wealth were most vulnerable due to lacking the financial resources necessary to weather the pandemic storm.

The Paycheck Protection Program (PPP) offered by the federal government intended to be a lifesaver for many small businesses, was not necessarily for the more than 130,000  Black businesses in Illinois.

Ivory says part of the problem is that PPP loans intend to fund payrolls, but most Black businesses have few employees, if any at all. “If they (Black entrepreneurs) cannot get access to financial opportunities, then that business won’t survive,” he said.

Some Black business owners who couldn’t get PPP loans were also not successful in getting traditional bank loans because longstanding discriminatory practices prevented them from getting capital and credit.

Austin is one of the communities under Mayor Lori Lightfoot’s INVEST South/West program. Over three years, the community improvement initiative is scheduled to  invest $750 million in public funding to stimulate economic growth in areas suffering from decades of disinvestment. The planned development is  looking to improve infrastructure in the neighborhood includes creating new businesses, rental housing units, parking garage, and common public areas.

For roll-up-your-sleeves small business owners like Weddington, it’s a welcomed opportunity to collaborate with others in the community to address social issues and inspire economic investment.

Weddington and her husband saw a chance to move their bakery shop into a more spacious place in a most trying year.

“If not for COVID-19 or the George Floyd civic unrest, we wouldn’t have this chance,” Weddington says about the outpouring of support she received emotionally and economically to expand her business. “New funding was available to us, and landlords were eager to make an unoccupied property more affordable.”

“Racism is expensive, a costly economic drain,” says Ivory, who is hopeful initiatives born from the pandemic exacerbating existing disparities and the killing of George Floyd illuminating structural racism across many facets of Chicago society will lead to positive systemic changes for the Black community. “You can’t rebuild a country by leaving out those most in need.”