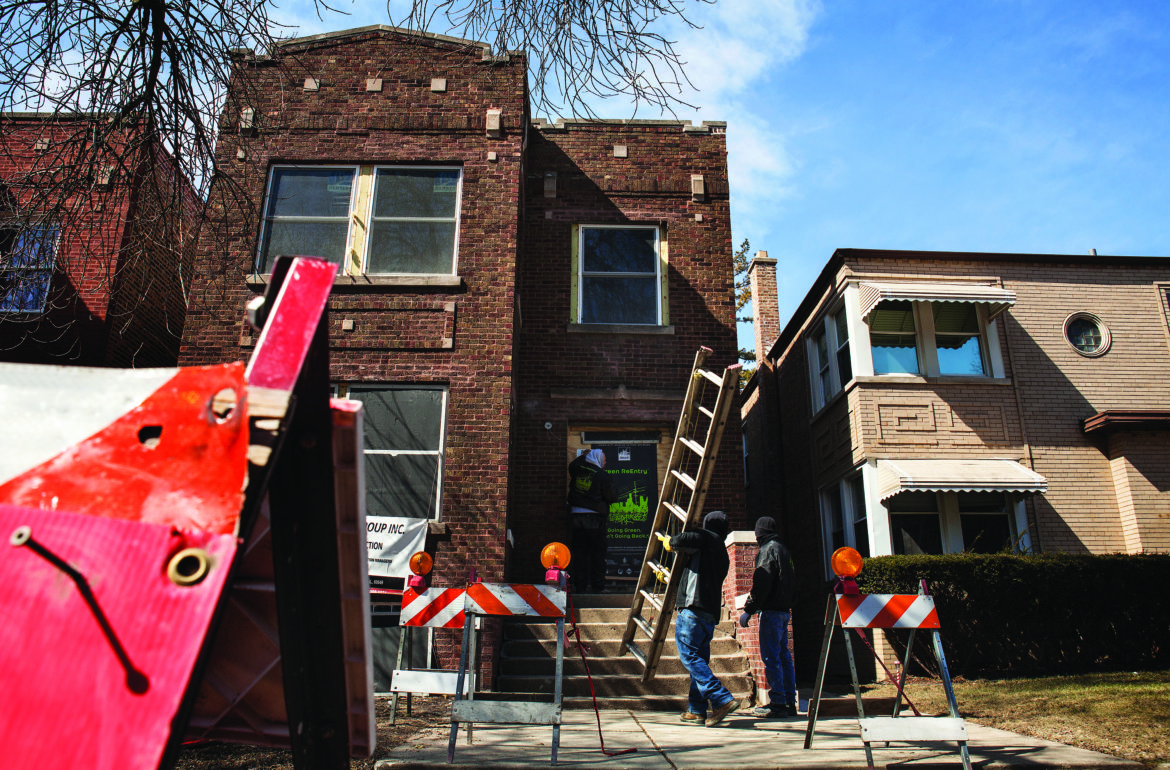 The rehabbing of a vacant house at 6210 S. Fairfield by the Inner-city Muslim Action Network's Green Re-Entry Project nears completion in Chicago Lawn.

About a year ago, an investigation by The Chicago Reporter examined the scourge of vacant buildings in the aftermath of the foreclosure crisis and Chicago’s efforts to hold financial institutions responsible for maintaining the properties. The Reporter investigation followed efforts in Chicago Lawn to turn an abandoned building into a home again.

The city says it has come a long way in addressing bank-owned vacant properties, many of which are on the South and West Sides. Officials with both the Chicago Department of Buildings and Department of Finance said Chicago has aggressively targeted big lenders since 2011. That year, an ordinance expanded the definition of property owner to include mortgage lenders and required them to register vacant properties with the city and maintain them or face penalties and daily fines.

“We have been going after the banks and making them pay,” said Judy Frydland, a former city lawyer who used to prosecute deadbeat property owners and now heads the buildings department.

City officials couldn’t immediately provide a breakdown of debts and payments tied to all bank-owned properties in Chicago. And it isn’t clear how many vacant properties are linked to banks because the city doesn’t track that.

About 4,500 vacant properties are currently registered with the city, though other estimates, including from the Institute for Housing Studies at DePaul University, state that there are more than seven times that number of vacant properties. A spokeswoman for the city stressed that buildings are always coming on and off the registry, and that it’s merely a snapshot in time.

She said that the city doesn’t seek out buildings to register, but that owners either volunteer to do so or get on the city’s radar after somebody complains about a building.

“They can do the right thing,” Frydland said. “They were just deciding when they wanted to.”

Tyler Smith, an executive at Wells Fargo who works on community development of bank-owned properties, denied any discrepancy in how properties are maintained based on property value or neighborhood. He said some neighborhoods just suffered a higher foreclosure volume than others and banks have their work cut out for them maintaining them all.

“There are just some neighborhoods that have been hit harder by foreclosures,” he said. “And I think that’s what you’ve been seeing when you go into Back of the Yards and Englewood.”