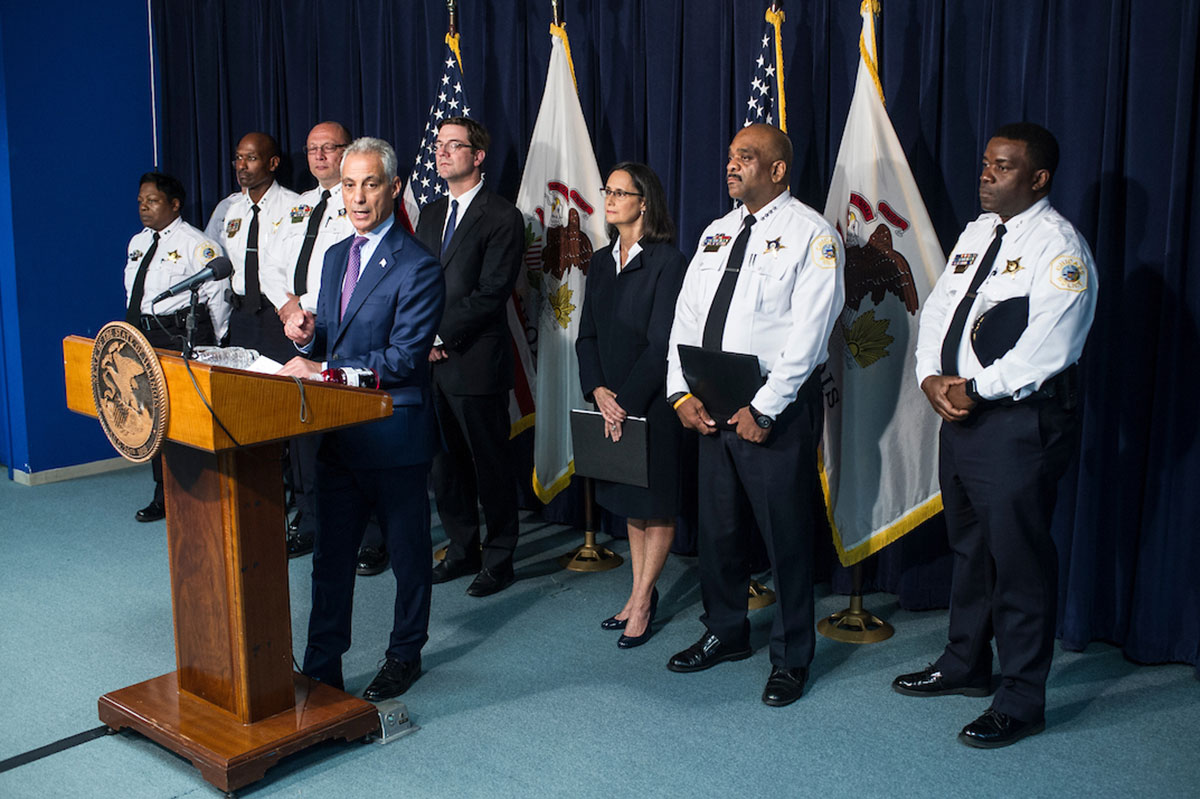 Mayor Rahm Emanuel appears at a press conference with Illinois Attorney General Lisa Madigan and Chicago Police Supt. Eddie Johnson announcing a partnership to work towards a consent decree for CPD on Aug. 29, 2017. 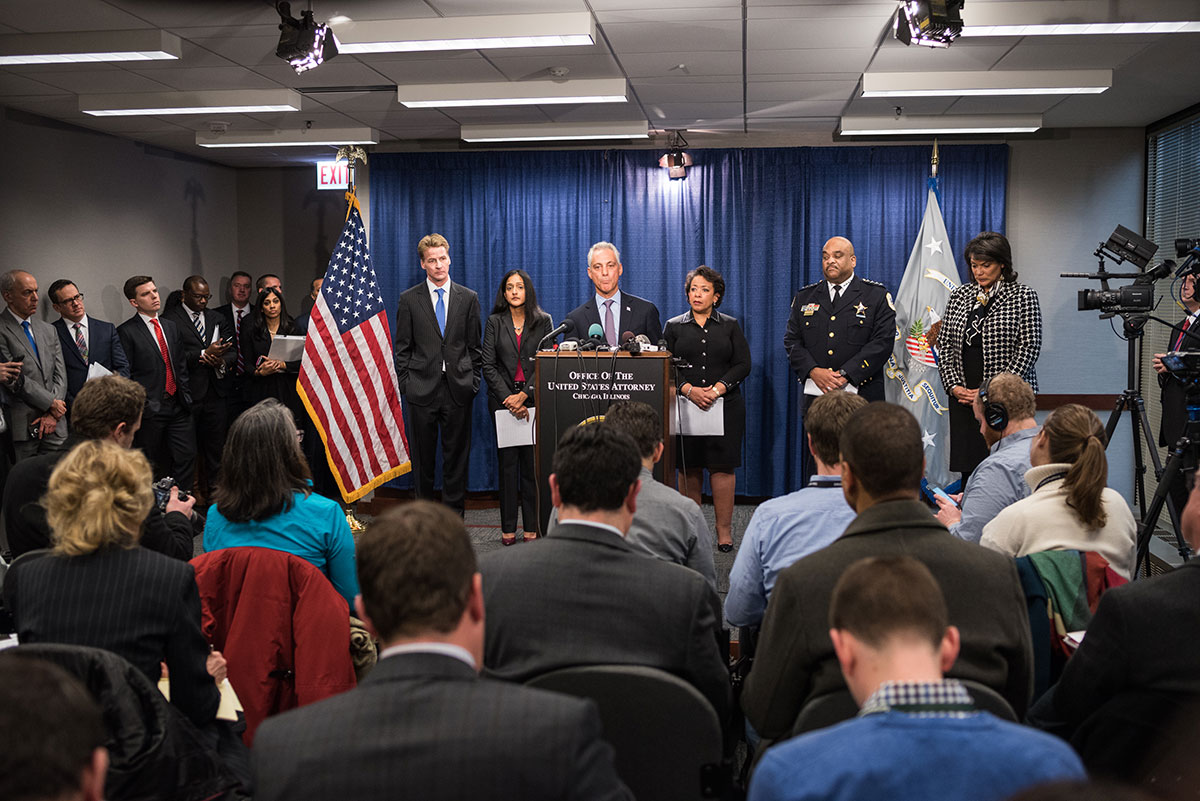 The Justice Department published a scathing report on “systemic deficiencies” in the Chicago Police Department on Jan. 13, 2017, and urged the city to enter a consent decree to work toward its recommended reforms. 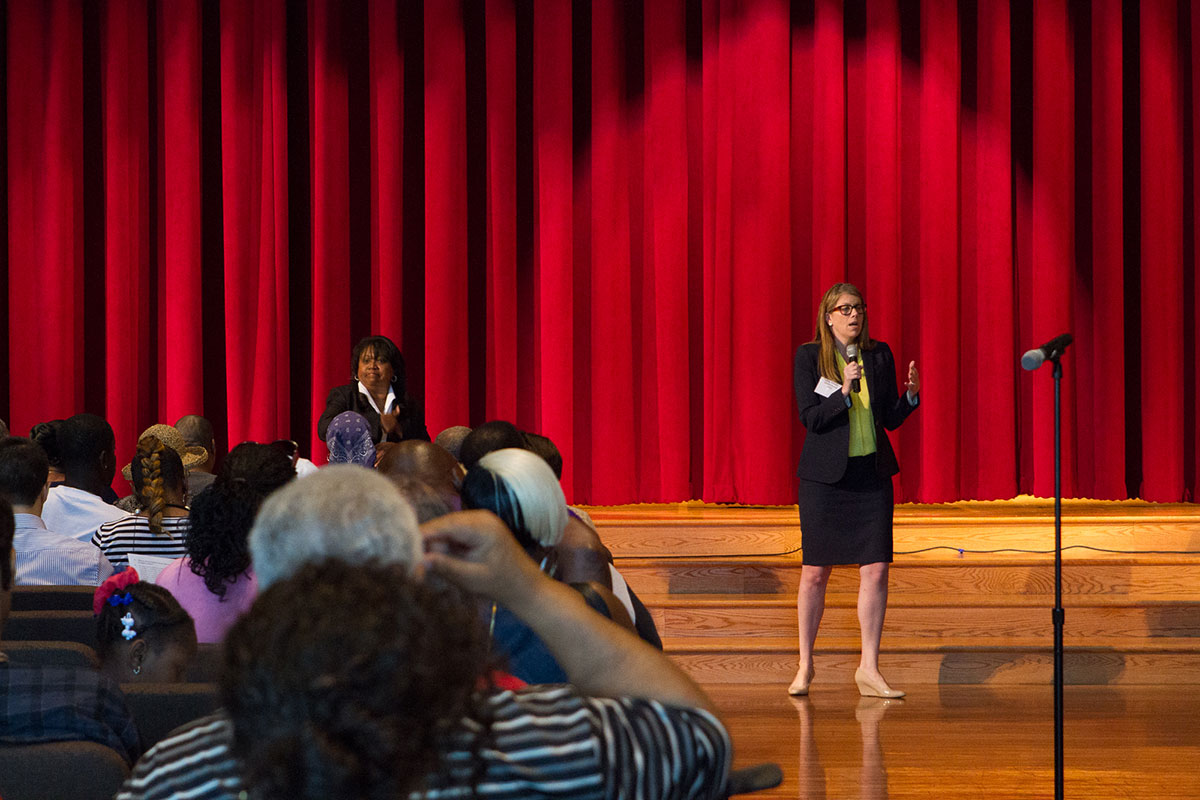 The Justice Department held several public forums for Chicago residents to speak about their experiences with the police department. Emily Gunston of the DOJ’s civil rights division speaks to an audience of almost 400 who came to a forum at KROC Center in West Pullman on July 14, 2016. 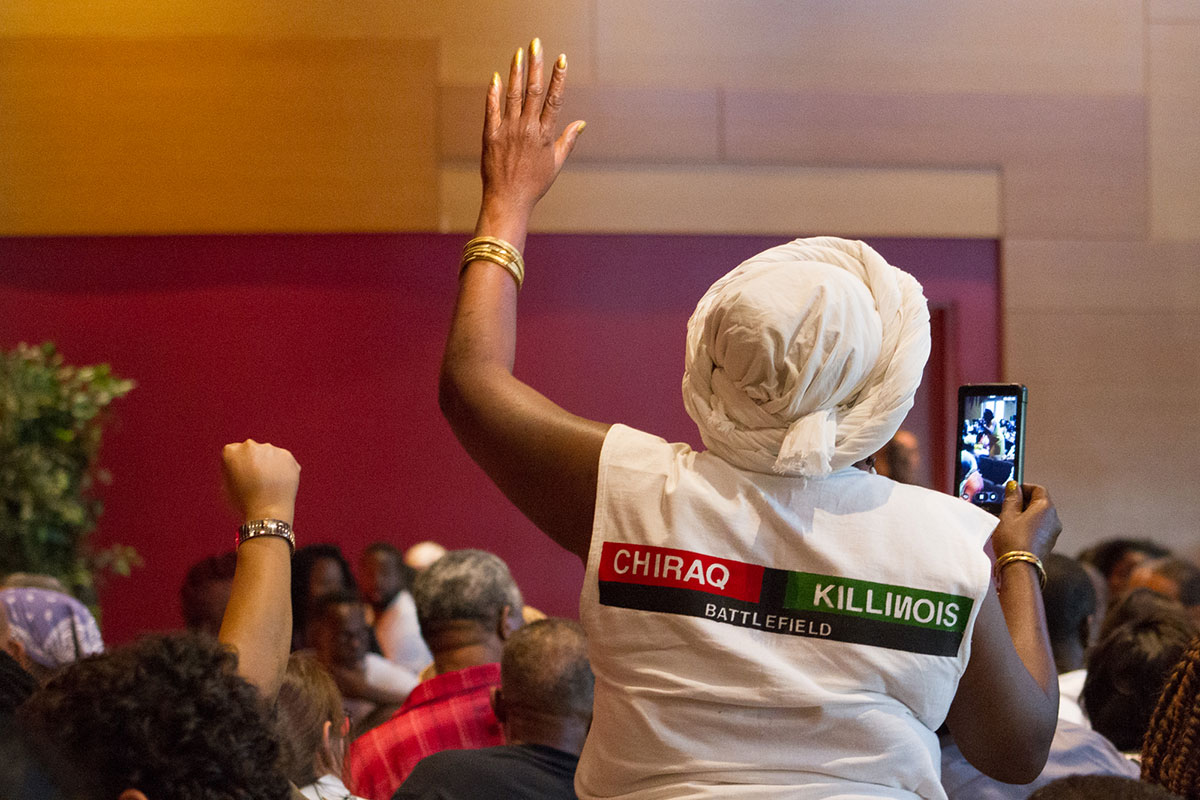 Audience members cheer as demands for reform are made at a public forum held as part of the Department of Justice’s civil rights yearlong investigation of the Chicago Police Department on July 14, 2016. 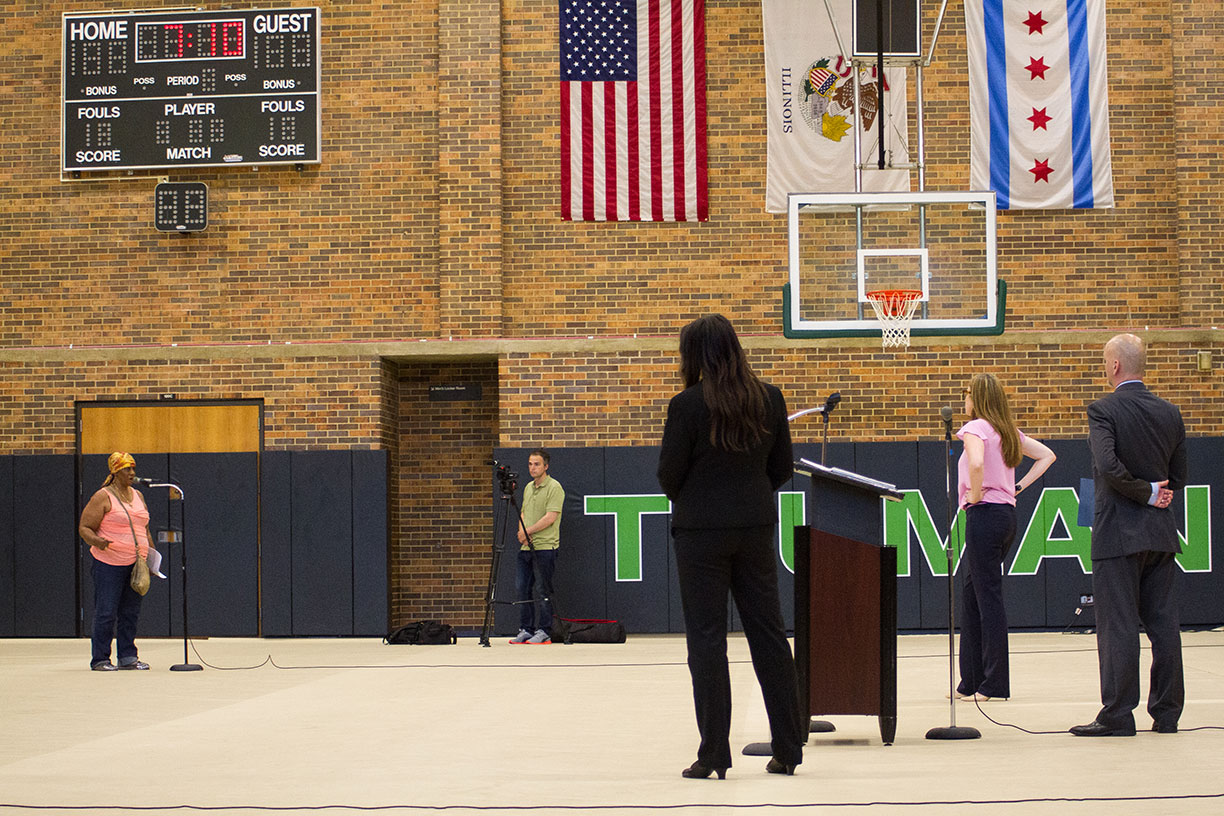 Justice Department officials listen to Aqueelah Ali, an Uptown resident who speaks about her son dying in police custody in 2012, at a public forum held on July 12, 2016, at Truman City College as part of a yearlong federal civil rights investigation of the Chicago Police Department. 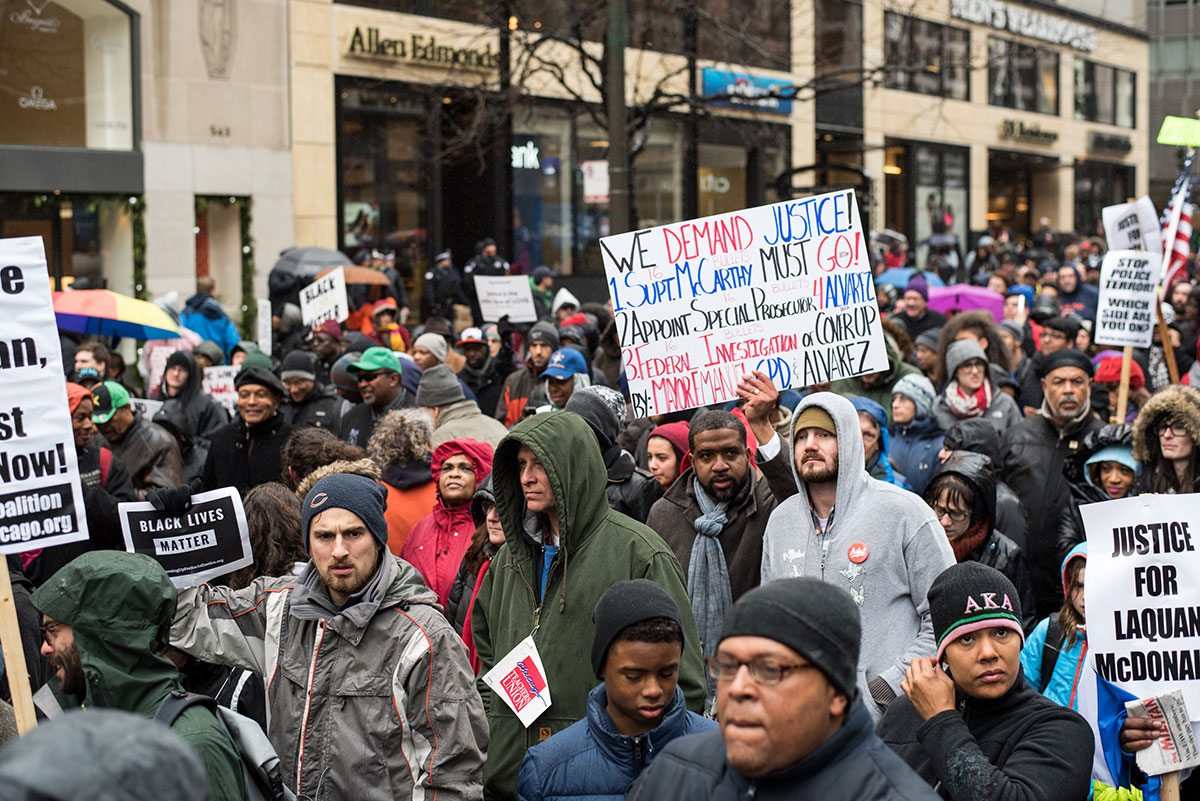 The Justice Department launched its civil rights investigation of the Chicago Police Department in the aftermath of the release of video showing the police shooting of Laquan McDonald, which sparked mass protests in Chicago, including a downtown march disrupting Black Friday shopping on Nov. 27, 2015.

Eight months after the U.S. Department of Justice recommended nearly one hundred reforms for the Chicago Police Department, the city has made progress on less than one-third of them.

The DOJ’s 99 recommendations were included in its highly critical report on CPD, released in January following a year-long investigation that found a widespread pattern of police misconduct in the city.

Using CPD’s public statements and reporting from news organizations, the Chicago Reporter is monitoring progress on the recommended reforms in an online tracker released today.

The reforms CPD has implemented thus far include changes to its Field Training program, increased staff for the Bureau of Internal Affairs, creation of a training oversight committee, and increased transparency of merit promotions. The department also revised its use-of-force policies and is in the process of training officers on it, which it says it will complete by October.

Some of the remaining reforms are low-hanging fruit, such as reinstituting regular public reporting on crime trends and policing activities. In October, CPD promised a 2016 annual report by February, but has yet to publish one.

Other recommendations are far more difficult, both to implement and to track. One example: more consistent accountability for officers who file false reports and discipline for supervisors who fail to report misconduct. While Superintendent Eddie Johnson has moved to fire several officers and supervisors for filing false reports to cover up the Laquan McDonald shooting, it may take years to know for sure if accountability for this type of misconduct has increased.

“These processes take a long time in every city,” said Karen Sheley, director of the police practices project for the ACLU of Illinois.

Typically, this many months after a DOJ investigation, the city and DOJ would be well on their way to negotiating a consent decree to enact reforms. But just days after the release of Chicago’s report, President Donald Trump took office. A few weeks later, Jeff Sessions, an outspoken critic of federal intervention in local law enforcement, became attorney general. Negotiations on a consent decree for Chicago—to the extent that there ever were any—stalled completely.

In late August, Mayor Rahm Emanuel backtracked on his months-long stance that the city didn’t need a consent decree and appeared at a press conference with Illinois Attorney General Lisa Madigan to announce a “partnership” to work toward one. Madigan had filed a lawsuit against the city, forcing the issue.

It’s likely to take months for negotiations on the decree and the appointment of an independent monitor, who is typically an expert in police reform with a staff, a budget that could reach into the millions  and access to internal documents and records. Independent monitors usually publish regular progress reports.

The Reporter’s tracker, in comparison, is based only on what the city has already made publicly available. For that reason, there are 25 recommendations marked as “unclear,” because the city hasn’t released enough information on them. (The Reporter gave CPD, the Civilian Office of Police Accountability, and the mayor’s office the opportunity to provide information about the “unclear” recommendations, and to contest the statuses of the other recommendations.)

“It’s going to be impossible for me to say how the city is doing until there is public reporting from an independent monitor,” Sheley said. “Reporters and not-for-profit institutions can do FOIA requests, they can ask questions, but they don’t have the level of access that a monitor would have.”

Until there is an independent monitor in place, the Reporter will continue to update its tracker with available information about CPD’s progress toward reform.