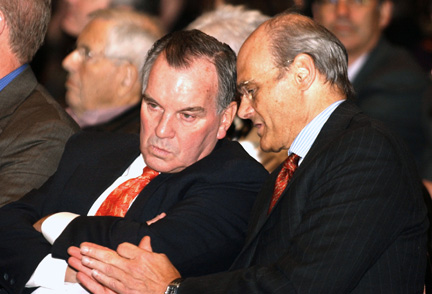 Budget crisis and state funding reform aside, when it comes to fundraising, Chicago Public Schools is on a roll.

So far this year, the district has raked in some $29 million in private and competitive government grants, up from $7 million a year ago.

In the five years since Schools CEO Arne Duncan took control of the district, revenue from outside grants has skyrocketed more than tenfold.

And these figures don’t include millions more, most notably from the Bill & Melinda Gates Foundation, donated directly to schools and not recorded in the district’s central bookkeeping system because CPS is not the fiscal agent for these grants. Nor does it include a recent windfall from government grants. A few weeks ago, Chicago won a five-year, $24.5 million grant from the U.S. Department of Education—one of only eight districts in the country to win the award—to expand a project helping struggling middle-grades readers.

The culture of philanthropy that supports major school reform efforts is not “unique to Chicago, but it’s certainly far more advanced in Chicago,” says Greg Simoncini, senior Midwest regional vice president of the Alford Group, a consultant to nonprofits. Funders here “have a very skilled eye on what works and what doesn’t,” he explains. For example, many have invested in teacher training programs, especially those that recruit career-changers who do not have traditional teacher education backgrounds.

In contrast to Chicago’s soaring private support, education giving in Illinois rose only about 1 percent between 2001 and 2003, according to the most recent edition of “Giving in Illinois.”

Meanwhile, Illinois lawmakers have yet to supply school districts with the ideal amount of base funding, and the federal government has cut back on education funding as well. For Chicago school leaders, this has meant annual pilgrimages down to Springfield to lobby for extra funds and a strategic shift to go after more competitive grants offered by U.S. Department of Education. Over the last four years, the portion of the district’s budget covered by state aid has hovered between 36 percent and 37 percent, says CPS Budget Director Pedro Martinez. State money is “barely keeping pace with inflation,” making it necessary to cut costs, he says.

“Historically, Chicago didn’t apply [for federal grants] or was universally unsuccessful,” says Duncan. “There was a perception that we couldn’t compete. I really wanted to break through that.”

Cooke says she encouraged the district to stop chasing so many small grants, especially at the state level, and target its efforts to score bigger awards. “I said to Arne, ‘Do you want all these little grants at the schools, or do you want to impact the system?'” Cooke recalls.

The first breakthrough was a three-year, $8.9 million grant in 2004 to open five magnet schools.

Since then, other significant federal competitive grants include $3.2 million for early literacy programs in preschool and kindergarten and $1.9 million for teacher recruitment and hiring, especially to bring in career-changers.

Winning these grants is also “a huge sign of people’s confidence in the job we’re doing,” Duncan notes.

The Gates Foundation has also signaled its confidence in CPS leadership and reform efforts by investing tens of millions in high school initiatives. The four-year, $21 million grant Gates awarded to Chicago in mid-April is the largest grant the foundation has ever made to a school district. Previously, funds would go directly to schools or outside entities.

“We really see Arne as one of a few leaders in the country who is really thoughtful and groundbreaking in making sure students are prepared for college, work and life,” says Margot Rogers, the Gates Foundation’s deputy director of education programs.

Also easing into Chicago’s education reform arena are other national funders who are seeking their own ways to make a splash. In the last three years, the Broad Foundation in Los Angeles has contributed more than $537,000 to the district’s Chief Executive Office, most recently to underwrite a residency program for business and consulting professionals.

Chicago’s largest local foundation, the John D. and Catherine T. MacArthur Foundation, is taking a backseat in local education funding. It remains involved in high school redesign and has supported strategic planning efforts. However, the foundation has stepped back from other CPS initiatives since a plan to close and reopen public schools in several gentrifying communities known collectively as Mid-South was scuttled under pressure from the Mayor’s Office and grassroots groups, who complained that they had been shut out of the planning process.

Still, the lovefest between Arne Duncan and local funders is stronger than ever.

Early on, funders were drawn to Duncan’s collaborative leadership style, a big switch from his predecessor, and accepted his invitation to help the district craft a long-term improvement strategy.

The Chicago Community Trust President and CEO Terry Mazany found himself working pro bono once a week in the district’s central office back during his days as education program officer.

“It proved to be very beneficial,” Mazany says. “It gave me a crash course in the realities and opportunities in central office. It developed a lot of relationships.”

It also laid a foundation for a $7.5 million grant for a literacy program that brings teams of university experts to mid-tier elementary schools to help teachers improve instruction. Currently the Trust is helping participating schools find ways to hang on to their university partners once the grant money runs out.

The Trust also has invested $1 million to expand Duncan’s vision of creating more community schools (prompting other funders to give $6 million), and $1 million toward improving math instruction in the upper elementary grades.

The district also has an especially close working relationship with the Chicago Public Education Fund, which was created in 1999 based on a venture philanthropy model. Most notable are its commitment to principal training and increasing the number of National Board-certified teachers.

“If we said ‘X’ had to happen, ‘X’ happened, and Arne made sure it happened,” President Janet Knupp observes. “The fact that we’ve had consistency in that role is key. He’s been able to own those goals and priorities with us.”

The Chicago Community Trust and the Chicago Public Education Fund are investing in two of Duncan’s top three priorities: literacy and human capital. The third priority is expanding school choice, which has taken shape as Renaissance 2010. Another group, the Renaissance Schools Fund, is backed by the city’s business and civic leaders and aims to raise $50 million to support school startups.

The Joyce Foundation is one of seven local foundations working with Gates alongside district, union and City Hall leaders on the Chicago High School Redesign Initiative. The team approach is facilitated by shared knowledge. “It’s not just the district setting its priorities,” notes Gretchen Crosby-Sims, education program manager for The Joyce Foundation. “We’re all looking at the same research. There are a few key areas to focus on.”

She points to Renaissance 2010 as a strategy that grew from the redesign team’s experiences trying to convert large high schools. “Maybe new schools are a more successful way to go than conversion schools,” she observes.

CPS is facing more and more competition for the city’s pool of private dollars. Civic groups that serve Chicago youth are tapping the same foundations and corporations that the district is courting.

Abbott Laboratories recently gave $500,000 to develop a science program for After School Matters, a public-private partnership for Chicago teenagers, and $500,000 for a new Renaissance school focused on math and science.

Simoncini calls this “a perfect example” of competition within the city for the education dollars of one company. He says though companies may fund multiple initiatives, “they’ll have to choose or split the difference” eventually.

Suburban school districts are just beginning to join the fundraising game. “Those are being met with some limited success, and a lot of initial resistance,” Simoncini says. “Parents in those districts think their tax dollars should be enough.”

As a result, suburban districts will be targeting wealthy CEO’s who live in their area, who are also the same CEO’s who run large companies that CPS will be targeting with a workforce improvement pitch. Chicago is up to the challenge, Simoncini says, then warns, “It’s just going to be competitive and difficult.”