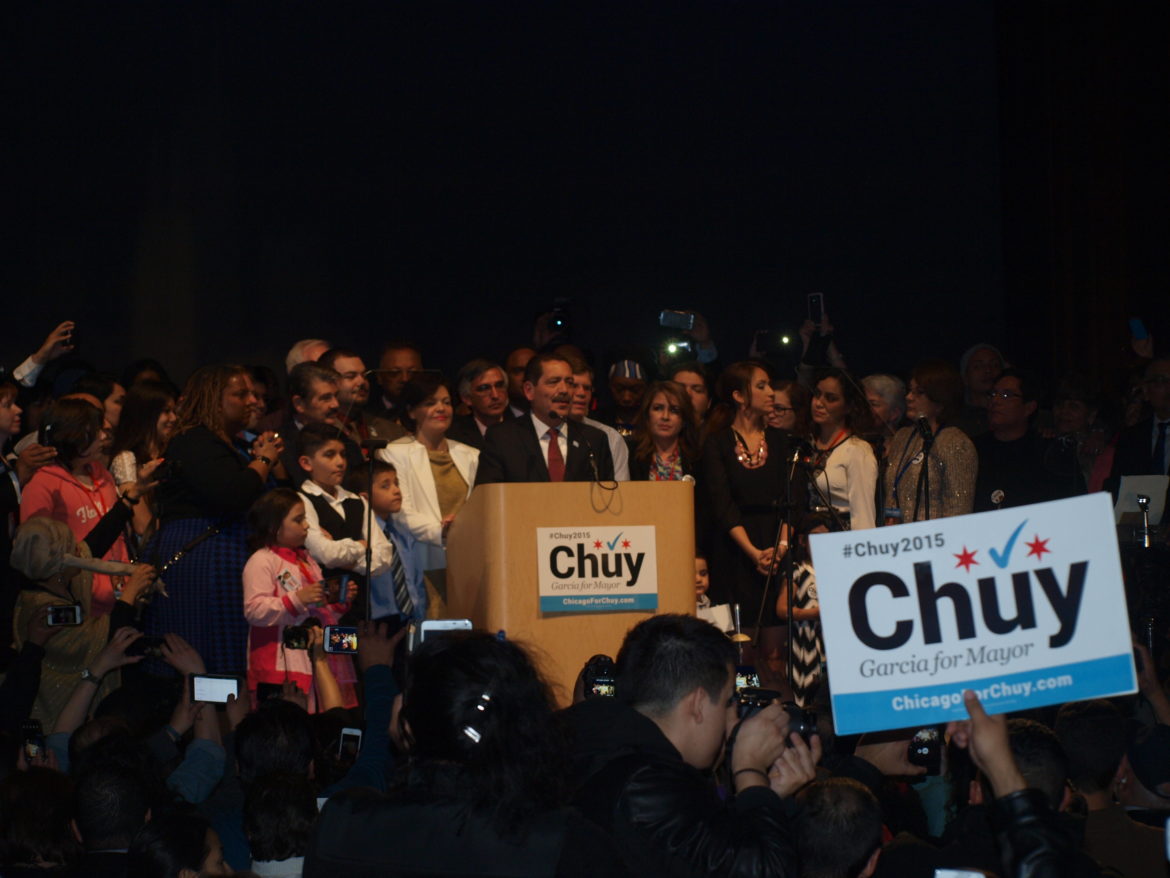 The feeling in the crowd at Jesus “Chuy” Garcia’s election night gathering was not one of defeat.

Instead, among the thousand or so activists gathered at the UIC Pavilion, there was a sense of what had been accomplished in the past few months, against the power of an incumbent and a political system which increasingly favors big-money campaigns.

In his concession speech, Garcia outlined the issues of concern to the progressive movement he was drafted to represent, and he vowed to “keep fighting.” “There are too many shootings on the streets, too much violence. … We need to stop the waves and waves of school closings and privatizations. … We need to stop paying too much attention to our downtown and too little to our neighborhoods.” Chicago can only face its debt crisis and pension crisis if the city grows its middle class, he said.

“We will not stop fighting for people, not today, not tomorrow, not ever,” he said. “We engaged in a political struggle to restore democracy in this city. … We move on to continue to fight for democracy.”

As Garcia thanked a long list of unions, progressive groups, elected officials and community leaders who backed his campaign for mayor, the crowd roared triumphantly. It was recognition of the scope and significance of the coalition his campaign helped bring together — or which called his campaign into being.

“We didn’t have enough time, but what we were able to do in the amount of time we had was amazing,” said Amisha Patel of Grassroots Illinois Action. “And it showed that the values this movement represents are the values of the majority of the city.”

That was clear from the fact that Mayor Rahm Emanuel “won by running as a progressive for the last four months, though he certainly didn’t act like it for most of the last four years,” she said.

Emanuel pushed through a watered-down minimum-wage increase in December, two months before the first round of the mayoral election, which will raise the rate to $10 this summer and $13 in five years. (His campaign literature said he has “raised the minimum wage to $13.”) A year earlier he had backed an increase to $9.65.

After Bill de Blasio was elected mayor of New York City last year on a platform of universal pre-K, Emanuel adopted the issue, and he talks about “moving toward universal pre-K” — although the financing scheme he’s using to fund a small increase makes that unlikely.

Emanuel also backed two affordable-housing measures, though he has refused to discuss reforming the CHA, which has stopped building new housing under his administration while it stockpiles reserves. And his school board even implemented an election-year moratorium on new charter schools.

The sustained opposition Emanuel encountered in his first term — leading him to strictly limit his public access — will limit his realm of action in the next four years. The dogged protests of the Mental Health Movement make it extremely unlikely he will move to close more clinics. The political beating he took in the teachers strike, when a majority of parents and Chicagoans sided with the teachers union (despite Emanuel’s ingenuous attempts to paint the strike as a fight over a longer school day) means he will negotiate much more reasonably for this year’s contract. The outrage caused by his massive school closings will probably lead him to shift to the old Daley strategy of closing 10 or 12 schools a year, once his self-imposed moratorium on school closings expires.

One question is the direction his relationship will take with Bruce Rauner, his old friend and the state’s new governor. Will Emanuel lead a popular movement against draconian cuts to social services and aid to cities and Rauner’s attempts to limit the ability of localities to use property-tax revenues? That would score him badly needed points. Or will he cozy up with Rauner to push through a Chicago casino and a sales-tax expansion?

If (as seems likely) the Supreme Court strikes down Emanuel’s pension reforms, will he join with Rauner to implement a costly (for the city and its employees) and lucrative (for investment brokers) shift to a 401K-style reform? Will he support Rauner’s potentially disastrous effort to allow municipalities and school boards to use bankruptcy to get out of pension obligations?

One heartening sign for independents — and a warning to aldermen who hew too closely to edicts from the 5th floor — is the defeat of several Emanuel-backed council incumbents on Tuesday. These include Natashia Holmes (7th), Lona Lane (18th), Deborah Graham (29th), Mary O’Connor (41st), along with the likely defeat of Ray Suarez (31st) and a tight lead for Susan Sadlowski Garza over incumbent John Pope ( 10th).

Some of the victors will probably vote with Emanuel, but some will join the Progressive Caucus; others ran promising to be more independent of the mayor. But everyone will notice how many of Emanuel’s candidates lost. Meanwhile, of two Progressive Caucus members facing runoffs, John Arena (45th) sailed to victory, and his colleague, Toni Foulkes (15th), looks like a winner too in the 16th Ward race.

Emanuel will continue to control a majority in the council, but the fact that the number of progressives and independents has grown — and that too close an association with the mayor was a liability in many places — will not give comfort to his acolytes.

Emanuel will continue to run the show, but he has been forced into a defensive posture, while the progressive movement seems poised for growth.