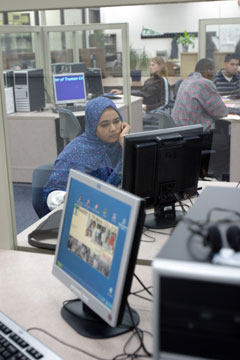 Like many Chicago Public Schools students, Michael Moseberry set his sights on attending a 4-year college, but ended up in junior college instead.

Moseberry’s plans to attend Northern Illinois University fell through when he returned his acceptance forms after the deadline and lost his spot. Rather than delay his post-secondary studies, he enrolled at Harold Washington College, one of the seven campuses of the City Colleges of Chicago.

There, he got an unpleasant surprise when he took the placement tests and landed in four remedial courses: a reading course to build vocabulary and teach methods for effective reading of textbooks; two writing courses; and Math 100, the lowest-level remedial math class, which teaches fundamentals of arithmetic and algebra.

Moseberry passed the English and reading courses, but failed math and will have to retake the course at Malcolm X College, where he transferred after taking a year off to work.

Moseberry, a 2003 graduate of Julian High in Washington Heights, says he left high school feeling unprepared for college. Teachers didn’t assign challenging work, he explains, and learning math proved especially difficult. In advanced algebra, he recalls, “we had a sub for like a month.”

At Harold Washington, his math teacher was a foreigner with poor English skills. “We had to ask him to explain more than once the work he put on the board,” Moseberry says. “He was basically just lecturing. We never worked in groups.”

Moseberry’s experience is common, according to data from CPS and City Colleges.

Yet efforts to raise those skills, both at high schools and colleges, have yet to take hold.

Landing in remedial classes sets students up for a cycle that can end up draining their money and morale. Ronald Davis, chair of the math department at Kennedy-King College, says students get discouraged and start to think, “I thought I was coming to college but I find myself back in high school.”

A critical part of reform

CPS is not alone. Nationally, “there’s a fundamental mismatch between the level to which students are being prepared in high school and the choices they are making after graduation,” says Kevin Carey, senior policy analyst for the Education Trust, a Washington, D.C.-based policy institute that focuses on the achievement gap between white and minority students.

That mismatch is greatest for students in urban public high schools, Carey notes. In CPS, students consistently post ACT scores that fall short of the benchmark scores considered a barometer of success in college.

Once enrolled in remedial courses, about a third of City Colleges students fail the courses and must retake the class, according to data from the Illinois Community College Board. (The failure rate is similar at other community colleges around the state.) Even if students pass, remedial classes don’t count toward a degree or transfer to a 4-year institution, yet cost money and time.

Because poor and minority students are most likely to place into remedial courses, “the kids who can least afford it are paying for courses that aren’t getting them credit for college graduation,” says Steve Tozer, an education professor at the University of Illinois at Chicago.

“Why we’re not addressing this in the city is beyond me,” says Davis Jenkins, a fellow at the Great Cities Institute of the University of Illinois at Chicago, who studies workforce development. “Nothing will change unless the mayor understands that this is a critical part of school reform and vital to the economic future of Chicago.”

Another year of math?

One way to improve college readiness in math—where students are most likely to fall short—is to increase the number of required math courses. In 1998, CPS did that by increasing its graduation requirements: Students would have to take three courses instead of two, including Algebra I, geometry and a second year of algebra combined with an introduction to trigonometry. Experts consider that course sequence to be the minimum necessary to prepare for college-level math.

But since most students complete the sequence as juniors, graduates taking college placement exams must dust off math skills they haven’t used for over a year.

That’s a huge problem, says Jennifer Kumi Burkett, a math teacher at Walter Payton College Prep on the Near North Side, one of a number of teachers who say that requiring a fourth year of math would keep students’ skills fresh, teach more advanced skills and send a strong message about the importance of college readiness.

But the district is unlikely to require an additional year of math, given the shortage of qualified high school mathematics teachers.

“Even if we wanted to do it, we wouldn’t be able to implement it very well,” says Martin Gartzman, chief officer of math and science for CPS.

Clifford Adelman, a top researcher with the U.S. Department of Education and an expert on community college students, says it’s not difficult for community colleges to help improve students’ weak math skills. In general, having to take one or two remedial math classes is not a significant barrier to graduation, he says, or to transferring to a 4-year college.

Some math teachers point out the importance of improving students’ skills in existing courses.

“Most of them are not ready for even the third-year course,” says Christine Franzen, a math teacher and department chair at Senn High in Edgewater, who has earned certification from the National Board of Professional Teaching Standards. “I’ve had kids who had trouble with multiplication tables, even addition, who were in Algebra II.”

Teachers also acknowledge that courses lack consistent content and standards, not just from one school to the next, but often from one classroom to the next. “Just because a course is titled ‘Algebra II’ doesn’t mean the students are being taught material in-depth,” Burkett notes.

In 1998, the district made a stab at establishing uniform content standards for high school courses by introducing end-of-course tests that all teachers would use. Known as the Chicago Academic Standards Exams, or CASE, the exams sparked protests from teachers across the city and were eventually scrapped.

To try and address the skills problem, CPS now requires students with below-average math test scores to take a double period of Algebra I, the most frequently failed high school math course.

Students also need to improve their study skills to help them retain math concepts, Franzen says. “At the end of a chapter, when the test is done, they don’t care about the stuff and they don’t remember it,” she explains.

Last year, Franzen encouraged seniors in her pre-calculus course to use a retention technique: Write down one problem and solution from each homework assignment on an index card and, before starting a new assignment, pick out one card and try to solve the old problem first, to refresh their memory. “A couple of them did it, and they said it helped,” Franzen says.

Not enough time for writing

English teachers in CPS generally teach five classes of 28 to 30 students, resulting in a mountain of essays to grade. “They are responsible for over 120 kids each day,” observes Barbara Kato, director of the Chicago Area Writing Project. “If you assigned one composition and spent only two minutes looking at each one, it would require four hours for each assignment. And that’s just for simple assignments.”

Large class sizes also make it hard to work with students individually, observes Michele Carlson, a former history teacher at Kelly High who now teaches in north suburban Highland Park. At Kelly, one of the most overcrowded high schools in the city, Carlson sometimes had classes of as many as 38 or 39 students, compared to 20 to 25 students in Highland Park.

“When kids are behind, they need more help and more time,” says Carlson. “But the system [in Chicago] doesn’t allow for it.”

Kato says students in upper elementary grades should be required to write more substantive papers, but admits that’s a hard sell to teachers. “I tell 4th- through 8th-grade teachers, ‘You should be teaching them how to take notes and write papers,’ ” she says. “But they say, ‘I’m preparing them for the ISAT.’ It makes you crazy.”

English teacher Maria Chavez of Hyde Park Academy, who recently completed her application for National Board certification, assigns juniors one to two major essays per quarter. But Chavez also stresses the need to set standards and constantly encourage students to improve.

The National Board application process, she says, taught her the importance of “being on [students] all the time, telling them they can do better, giving them some suggestions. I was never that kind of teacher before. I never saw that if I got on them I would see growth and improvement.”

As for reading, CPS has begun to address the need to teach high school students the higher-level comprehension skills they need to understand textbooks and other non-fiction. In 2002, the district began a reading initiative in the high schools that includes a reading course for freshmen entering with skills below grade level. The effort has been credited with this year’s higher scores on the Prairie State exam.

It’s more difficult for colleges to try and improve weak reading skills than weak math skills, Adelman says. He stresses that it’s important for high schools to address the problem early, since the lack of such skills can more easily sink students’ college careers.

The problem goes beyond reading, Adelman says, since students with low reading skills “probably can’t read the math problems either.” Nationally, he explains, schools “aren’t teaching reading to kids who come into 9th grade with 6th-grade level reading. People give up. They throw up their hands. They say it’s too late. It’s not.”

Overall, improving students’ college readiness requires that both high schools and colleges change how they do business, says UIC’s Tozer. At UIC, the College of Education tried a new way of teaching remedial math, with good results. (See story on page 10.)

In theory, raising skills, and in turn raising placement test scores, is simple, says Jenkins. “You track the data and you show how students fare, and then you get the faculty from the colleges and the faculty from the high schools together, and you hammer out an aligned curriculum.”

But in practice, it’s not simple.

In 2001, City Colleges received more than $660,000 in federal funds for Project Align, an initiative to bring together local colleges and universities to work with a pilot group of eight high schools and set minimum expectations for graduates. Those standards would then be aligned with high school coursework. Though the grant ran out in late January, City Colleges and CPS are continuing the project with their own resources and a small state grant, says Jose Aybar, co-director of the project for City Colleges.

But conversations with schools involved indicate the effort has yet to result in substantive change. Peggy Korellis, assistant principal at Corliss High in Pullman, says it wasn’t until last year that the venture even got underway. Still, beginning this fall, she expects teachers to use regular assessments of student progress developed through Project Align.

Interns Kalari Girtley and Diana Oleszczuk contributed to this report.