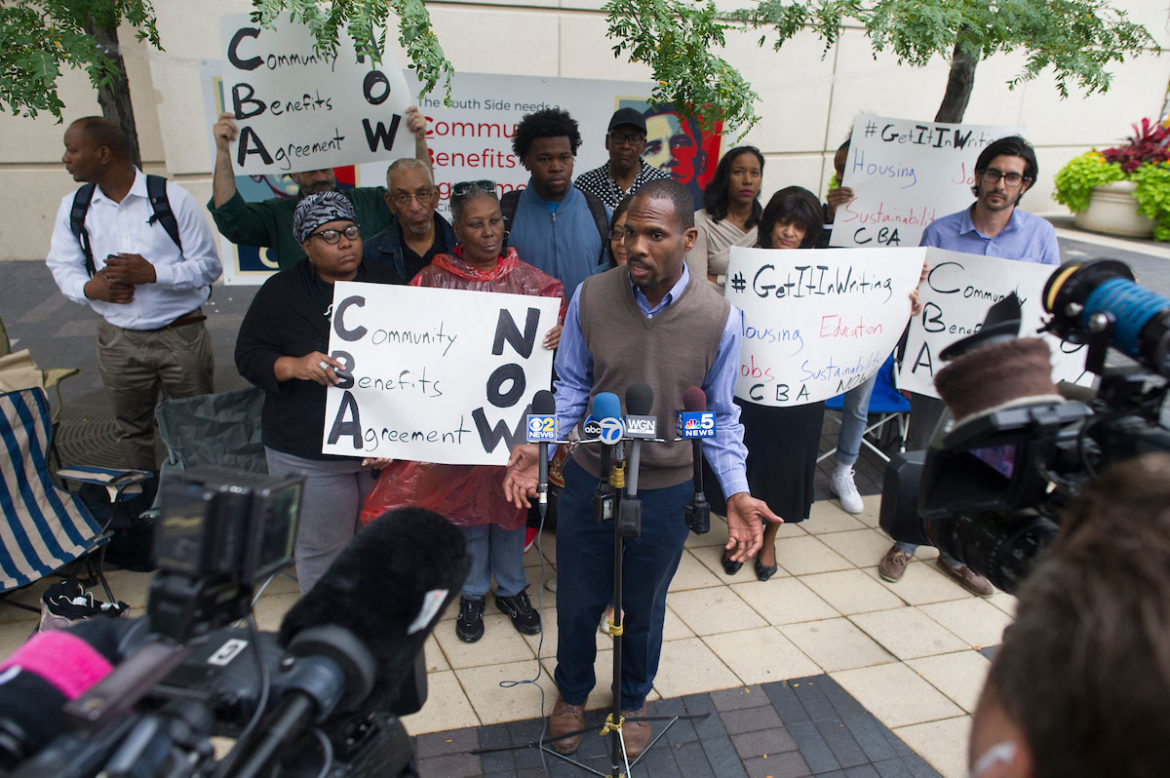 Jawanza Malone, executive director of the Kenwood Oakland Community Organization, speaks outside Hyatt Regency McCormick Place, where Obama Library South Side Community Benefits Agreement Coalition members camped out on Sept. 13, 2017, ahead of an Obama Foundation meeting taking place there the next day.

Although they still have a long way to go, the Obama Library Community Benefits Coalition is travelling down the path described in an old organizer’s adage: first they ignore you, then they ridicule you, then they attack you, then you win.

The ignoring and ridicule appear to be behind them. The coalition has actually been physically attacked. Four times, windows have been smashed and doors broken at the 61st Street office of Southside Together Organizing for Power, a coalition member. On a street with several businesses, STOP’s office is the only storefront that’s been vandalized.  And car windshields were broken on the street ­– exclusively in the vehicles of STOP members.

Although the perpetrators remain unknown, “It certainly shows that someone thinks we’re having an impact,” said STOP executive director Alex Goldenberg. After a slow start, the coalition of community organizations is gaining ground after making several smart strategic moves.

Obama himself dismissed demands for a CBA and fears of displacement, joking about how many organizations would want a seat at the table, and saying gentrification was something his daughter’s children might have to worry about. The former president and his foundation stressed their comprehensive program to promote hiring from the community.

But organizers pressed on, winning backing from major unions and from editorial boards – as well as national media attention highlighting the irony of community organizers raising the kind of issues Obama had pushed in his days as a community organizer. And in recent weeks, the coalition has shifted public attention to housing rather than jobs, highlighting the threat of gentrification in convincing terms.

“If you look at displacement, you can’t argue against the fact that it is already happening” in areas like Woodlawn and Bronzeville, and “the numbers are stark,” said Jawanza Malone, executive director of the Kenwood Oakland Community Organization.  Malone and KOCO were key organizers for the community benefits agreement for the Olympics and are part of the Obama center coalition.

Malone cites a Redfin study that found that property values in Woodlawn (where the median income is $24,000) went up by 23 percent in over six months last year; data from the Chicago Rehab Network showing that 62 percent of Woodlawn residents are rent-burdened; and a study by DePaul’s Institute for Housing Studies that found that 14,000 more units of low-income housing would be needed to meet demand in the area around the Obama center.

The threat of displacement and rising rent was made even more clear this month when low-income residents of Jackson Park Terrace apartments – directly across the street from the proposed site of the presidential center ­– learned their rents would go up by as much as $200.  The apartments are partly owned by the Woodlawn Community Development Corp., headed by Leon Finney Jr., whose questionable financial dealings and housing code violations have been extensively covered by The Chicago Reporter. Following protests by building residents backed by the Community Benefits Coalition, the rent increases were rescinded.

“If the community where Obama’s center is located is completely gentrified, and all low-income and working-class black families are pushed out – I don’t think that’s the legacy he wants.”

While Obama and his foundation stress their contracting and hiring plans when discussing a CBA, “affordable housing is one of the most important pieces,” and “that’s what they’re missing,” said STOP’s Alex Goldenberg.

As far as choosing who to include as parties to a CBA, the coalition is no longer calling for a negotiated legal agreement and has for months been proposing a community benefits ordinance passed by the City Council. That would go beyond promises by the Obama Foundation and require commitments from the city and from the University of Chicago, which is currently planning a hotel, conference center, and dorm near the site of the presidential center.

Also boosting the coalition’s prospects is the fact there’s a precedent in Chicago: a community benefits agreement to spread economic benefits and protect residents from displacement was passed by the City Council in 2012 in connection with the city’s eventually unsuccessful bid to host the 2016 Olympics.

As proposed, the new ordinance the coalition is proposing would require that 7 percent of development costs for the presidential center, the university’s projects, and the city’s infrastructure investments be placed in a community trust fund to support employment programs, small business development, and a rental assistance program. It would hold the university and the city to hiring standards that are similar to those adopted by the Obama Foundation.

It would require that 30 percent of units in new and rehabbed housing be affordable and commit the parties to work with the county on a property tax freeze or exemption for dwellings within two miles of the presidential center.

The ordinance was presented to the Obama Foundation a few weeks ago, and a response is expected at a meeting next month, he said.

The presidential center is moving forward, with a vote by the Chicago Plan Commission expected next month.  The foundation hopes to break ground later this year, though park advocates warn that an effort to expedite a federal review could backfire.

But as long as fears of displacement remain, organizers say, the demand for much broader protections for residents – in writing – will continue. “If the community where Obama’s center is located is completely gentrified, and all low-income and working-class black families are pushed out – I don’t think that’s the legacy he wants,” said Goldenberg.