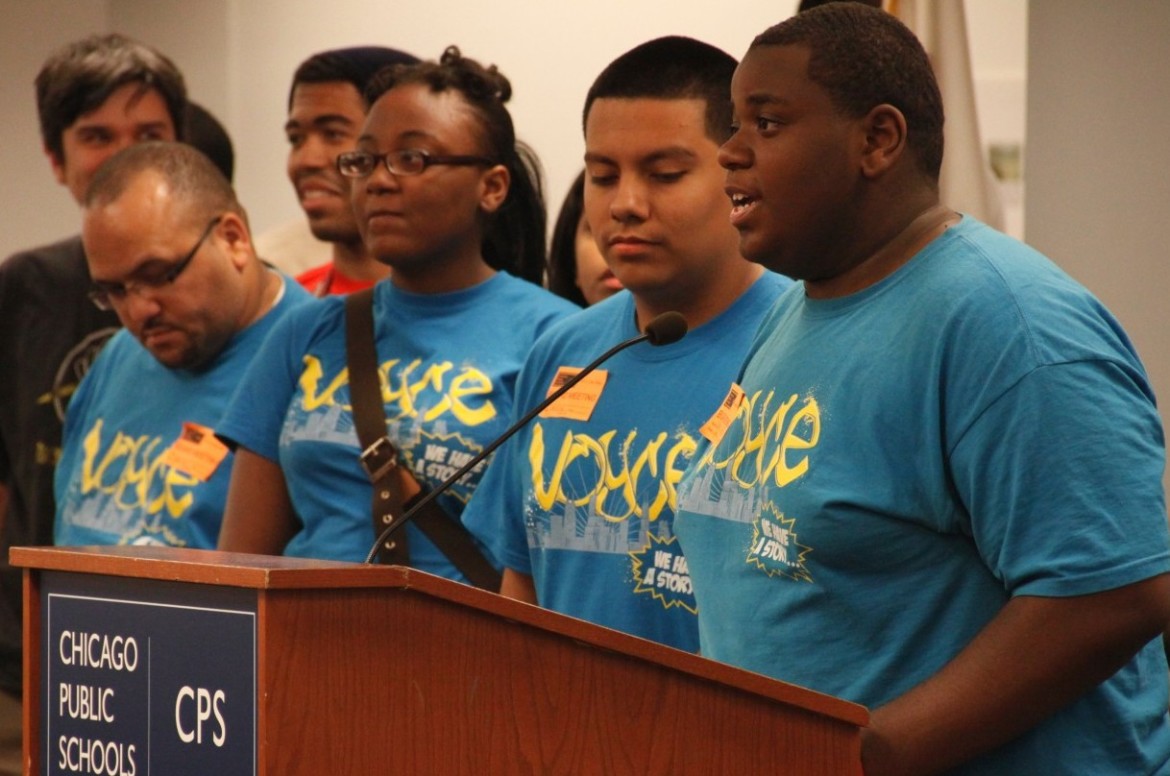 Members from Voices of Youth in Chicago Education speaking about the Student Code of Conduct, which CPS has changed in recent years to reduce expulsions and suspensions. (File photo)

For the second year in a row, CPS will raise property taxes to the max in order to fill a budget deficit, projected to be between $600 and $700 million.

In a press release, Board President David Vitale said the money will help the district keep class sizes stable, implement a longer school day and invest in preschool.

“We don’t take an increase lightly,” he said.

The decision is one of the first indications of how district leadership plans to deal with the budget deficit, while at the same time resolve difficult teacher contract negotiations and implement new initiatives.

These issues were looming Wednesday at the school board meeting. The meeting featured parent groups, some of whom came to support the teachers union and others who came to put pressure on them to resolve their differences.

Also, groups of teachers, students and parents came to talk about how the school-level budgets were playing out in their buildings. One group was from Clemente High School, a West Side that sits on the border between a gentrifying area and the rough and tumble Humboldt Park.

Clemente High School is on the precipice of change.

Last week, it was awarded a $5.6 million federal school improvement grant to perform a reform method called transformation in which a principal works with existing staff to improve a school rather than firing them as in a turnaround. In the same week, Mayor Rahm Emanuel announced that it was going to be one of the five wall-to-wall International Baccalaureate schools, bringing a high-level, rigorous curriculum to the school.

But these new initiatives weren’t able to save Clemente from being hit by another trend. Surrounded by new, mostly charter, high schools, the school is being drained of its population. Many of the other CPS high schools awarded school improvement grants are grappling with the same situation.

At the board meeting on Wednesday, a cadre of Clemente teachers came to complain about being laid off. Over the past week, some 22 teachers out of about 75 have been told that their positions have been eliminated, said Kevin Hough, who is one of those teachers.

CPS officials said these positions were lost due to a projected enrollment drop of 27 percent over the next year. If the district’s projections are right, Clemente will go from a school of 2,700 in 2005 to a school of 784 in 2012, a decrease of more than 70 percent. The drop was precipitated this year by the removal of the achievement academy, a special program for overage 8th-graders.

Hough said the teachers are dismayed because they were the ones that held the school together as it experienced a tumultuous last few years. “We have seen improvement at the school without any effective leadership,” he said.

CPS spokeswoman Robyn Ziegler said about 800 teachers were laid off across the district due to projected enrollment decreases and program changes, which can result in a shifting of position needs. Ziegler said layoffs at this time of year were down by about 20 percent.

CTU Vice President Jesse Sharkey said that he’s heard that principals are taking a wait-and-see approach as they look at the next year’s budget. Though principals have received their funding and submitted their school-level budgets, officials have yet to release the district-wide budget.

With teacher contract negotiations ongoing and a projected deficit of about $600 million, there’s a lot of uncertainty, he said. “I have heard that a lot of principals are coasting,” he said.

In the meantime, some budget decisions are being made. On Wednesday, CPS awarded contracts to the Academy for Urban School Leadership to continue managing two of the first elementary school turnarounds.

AUSL will manage 2006 turnaround Sherman Elementary School for four more years and 2007 turnaround Harvard School of Excellence for another five years. The not-for-profit teacher training organization will get $420 per student or about $350,000 for both schools each year.

While the schools have both made improvements, Ziegler said there’s still work to be done. Both schools have seen 30 percent increases in their ISAT scores, but are still below the district average. Sherman is a Level 3 school, which is the worst rating the district gives.

AUSL spokeswoman Deirdre Campbell said the organization looks at turnarounds as a process, not an event with an end date.

But Valencia Rias-Winstead, a former leader for Designs for Change, said it seems to her that district officials favor AUSL by giving them more chances to improve the schools.

“You should be ashamed,” she said.

CPS officials stressed that they are encouraging schools to use more corrective and restorative justice. They also are taking steps to take a holistic approach to discipline.

Community and student groups, which worked on the code, said that it was a step in the right direction, but said they worried that it didn’t go far enough in forcing principals to use suspension and expulsion in only the most extreme circumstances.