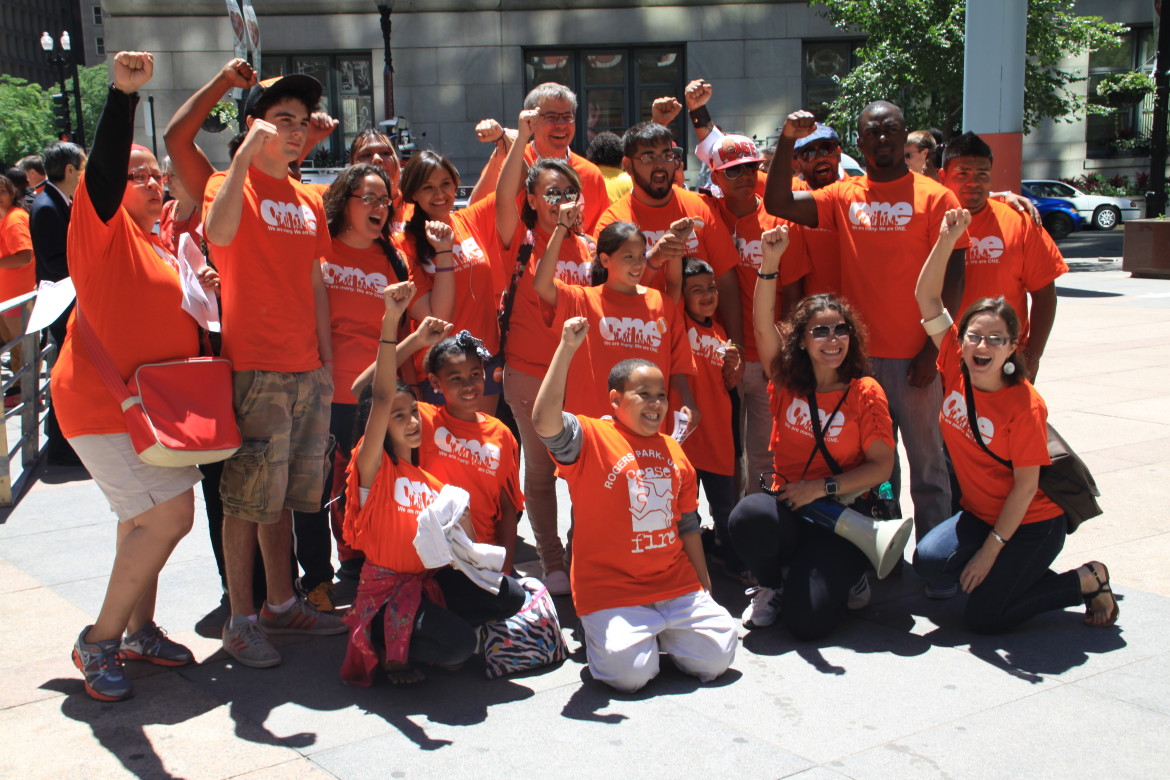 Students and other members from Organization of the NorthEast were part of a coalition that rallied outside of City Hall in favor of more restorative justice and less harsh discipline in CPS. The coalition says revisions of the student Code of Conduct that will be voted on Wednesday still focus too much on punitive practices. Photo by Mark Chong Man Yuk.

In advance of Wednesday’s Board of Education vote, CPS today released its proposed revisions to the Student Code of Conduct. But the revisions, though making changes such as eliminating automatic 10-day suspensions for even the most severe offenses, did little to quell the dissatisfaction of student and community groups with how the district handles discipline.

Students and community groups have been calling for drastic revisions to the code for months, including at a protest last week outside Mayor Rahm Emanuel’s office and a rally today outside City Hall.

The most significant change in the revised code is the scrapping of automatic 10-day, out-of-school suspensions from the arsenal of punishments for even the most serious offenses (which include sexual assault and the use of a weapon). The minimum number of days for suspension in these severe cases is five, although the principal may still apply up to a 10-day suspension.

The revisions also reduce the maximum number of suspension days for other “groups” of less severe offenses. For example, a student who previously would have been suspended for up to five days for Group 2 behavior, which includes offenses such as displaying or publishing obscene or profane materials, can now only receive a maximum of three days of out-of-school suspension.

Principals can also use in-school suspensions as an alternative to, or in combination with, out-of-school suspensions. For example, a principal could now have a student serve two days of his or her suspension out of school and one day in school.

The revisions also call for more use of practices to address misbehavior without punishment, including steps that principals should take to be proactive, such as “redirect to correct behavior” and “intervene to minimize disruption, resolve conflict as necessary to keep students and staff safe.”

CPS Director of Youth Development and Positive Behavior Support Jennifer Loudon said that this revised code provides “additional options” for principals and teachers when considering consequences for student misbehaviors and encourages the use of peace circles, peer juries, mentoring and other practices.

CPS intends its revised Student Code of Conduct to be “corrective, instructive, and restorative,” Loudon said.

“We want to start fixing problems when they are small, and not let them get bigger,” Loudon said.

Leaders from VOYCE (Voices of Youth in Chicago Education) said the revisions don’t go far enough, and the same sentiment was voiced at today’s rally outside City Hall by students, parents, faith leaders and educators.

Although eliminating the automatic 10-day suspension is a step in the right direction, the revisions don’t address the issue of racial disparity in discipline, don’t do anything to hold charter schools more accountable for their discipline practices or provide interventions that kids need, says VOYCE .

“Hundreds of young people are slipping through the cracks,” says Emma Tai of VOYCE. “There’s an urgency to the issue that we didn’t see reflected in CPS’s actions.”