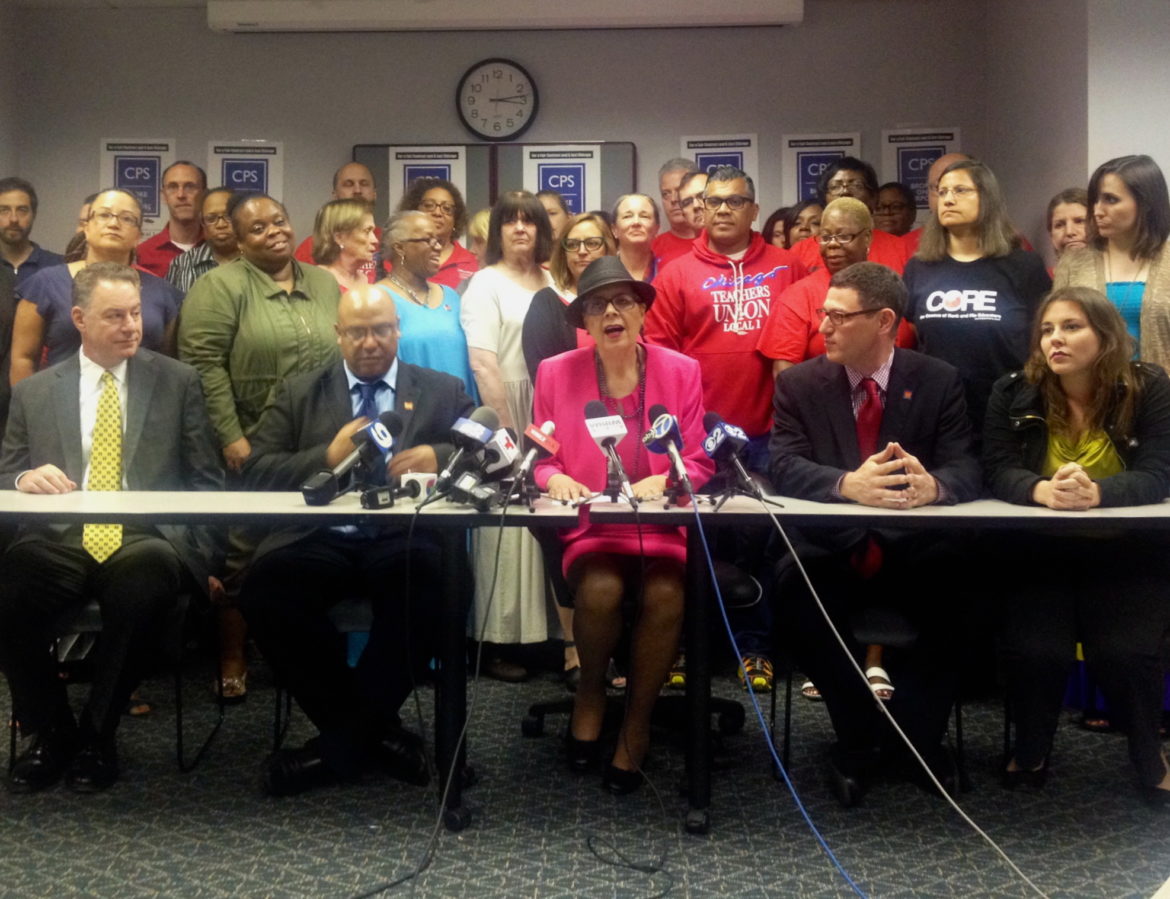 Chicago Teachers Union leaders say contract negotiations broke down today and accused the district of refusing to bargain on what they’re calling “non-economic” issues such as grading policies, testing and lowering the cut scores on educators’ evaluations.

In addition, union leaders say CPS is threatening to cut 3,000 jobs – a mix of teachers and paraprofessionals – on top of asking for $200 million in other budget cuts.

“We are still willing to come back to the bargaining table and our talks could continue, but as of right now talks have broke down,” CTU President Karen Lewis said during a press conference at union headquarters. “Instead of making a deal with us, they’ve made threats.”

She added that a strike isn’t “off the table.”

Shortly after the CTU press conference, Mayor Rahm Emanuel issued a statement urging the union back to the bargaining table. He also accused the union of trying to “shortchange our children by eliminating evaluations for tens of thousands of employees or lowering teachers’ performance standards.”

CTU leaders said they haven’t asked to eliminate evaluations, which are required under state law, although they have asked to stop observations of clinicians for one year while a new evaluation system is being developed.

The mayor said he was “encouraged that both sides finally acknowledge that CPS is in a fiscal crisis and lacks the resources to provide additional compensation, and that is a step in the right direction.”

CPS officials did not offer any comment Thursday evening.

The union had been optimistic going into today’s bargaining session, as it had already come to agreements with CPS on some of the most basic terms on the contract: a one-year deal, no pay raises and the preservation of both the district’s  7-percent “pension pickup,” as well as the step-and-lane salary structure.

Union insiders had told Catalyst that the district was under pressure to hammer out a deal before next Tuesday –  an important date on many fronts. That’s when the CTU’s current contract expires and when CPS is required to make a $634 million payment into the teachers pension fund. A bill to grant CPS a delay in making that payment was voted down in the state House earlier this week but Speaker Mike Madigan has said he’ll bring it back for a vote next Tuesday.

Union attorney Robert Bloch said it’s “unlikely” a deal will be reached before then and that there are no more bargaining sessions currently scheduled.

CTU Vice President Jesse Sharkey took issue with the mayor’s comments about teacher evaluations. He explained that the union wanted to lower the cut score for rating teachers as “developing” – the third of four categories under the CPS evaluation system – from 284 to 260. He says that’s because teachers who are rated as “proficient” in all but one category can still earn an overall rating of “developing” under the current system.

“We’re not trying to eliminate evaluations,” he said. “We want to address what is a deep inconsistency in the evaluation system by changing the cut score.”

Union leaders said another major sticking points in today’s negotiations was the district’s unwillingness to discuss granting teachers more autonomy on how they grade students’ work. In the past two years, Lewis said, school principals have been increasingly setting standardized grading scales for all classrooms.

“There have been policies that have come down that have basically said ‘You must put x amount of grades in for each subject every week’ It was some arbitrary number,” she said. “People want to be able to have some autonomy over their grading and that wasn’t happening. We even said ‘Could we at least put it to a faculty vote, or something?’ But they said no.”

When asked why she told reporters earlier this week that the union was close to a deal, Lewis said she thought the union’s non-economic proposals “would be easy. It turns out they weren’t.”