On a Wednesday night in February, first-year teacher Derrick Kimbrough and about three dozen other new teachers gather in a room at the University of Chicago. As they trickle in, they greet each other and share hugs and tidbits of news from the day. This is their 12th meeting as a group and they have grown comfortable and relaxed around each other.

Today, each of them will get a copy of the children’s book, “Tar Beach,” a story about a young African-American girl in New York who, while sitting on the tar-covered roof of her building, imagines “flying” over bridges and buildings that are special to her.

For the next two hours, they learn how to use the book in class to talk about communities, families and landmarks. They also learn techniques for teaching skills such as picking up context clues, making inferences and writing. Students will need all those skills to ace the upcoming ISAT test.

“I love these meetings,” says Kimbrough, who left the corporate world for the classroom and is now a 5th-grade teacher at Tarkington Elementary in Chicago Lawn. “I know I am going to leave with one or more good things to use in my curriculum or to help me take my students to another level.”

The meetings, held bi-weekly for first-year teachers and monthly for those in their second year, are just one strategy of the New Teachers Network, a two-year induction program that is a project of the Center for Urban School Improvement at the University of Chicago. Along with the camaraderie of working with other newcomers and learning new teaching techniques, the meetings also provide a place to pick up practical tips to ease day-to-day life in classrooms and schools.

Ultimately, the network’s goal is to retain newcomers who are committed to teaching in urban schools and have the potential to make a positive impact in their classrooms and schools.

The network was launched in Area 15 (which includes Bronzeville, Douglas, Hyde Park, Kenwood and Woodlawn, as well as one school in Englewood and one in South Shore) as a replacement for GOLDEN, the district’s mentoring and induction program. A few teachers from other parts of the city, who heard about the network and wanted to participate, have been included.

Last year, 101 teachers participated in the network; 89 of them remain in Chicago Public Schools this year.

“Our goal is not 100 percent retention,” says Lisa Vahey, one of the program’s co-founders. “Urban teaching is not for everyone. But for those who want to do this, we help them make it through.”

As of April, 114 first-year and 75 second-year teachers were participating.

Kimbrough, 37, became so frustrated with the business world that he enrolled in the Academy of Urban School Leadership to become a teacher and says he received a solid foundation in teaching there.

But when Academy staff recommended the network, he decided to give it a try.

“I love teaching. I often question why I hadn’t been doing this sooner,” Kimbrough says.

“Being at the Academy was definitely a plus, but I found that [feedback] is something I need every two weeks. I like to hear, ‘Hey, Derrick, you are doing a good job’ or, ‘You might want to do this a little differently.'”

Along with such feedback, meetings include talks about classroom management, literacy, race and culture in the classroom, and new policies and programs in the district. There’s also discussion of the “little things” that will make a new teacher’s life easier.

For example, newcomers are cautioned to expect discipline problems the day after report card pickup day from students who didn’t do well.

“We tell them, ‘Kids get a spanking and they are going to hold it against you,'” says Ken Kern, the director of the network.

Another example: Newcomers are also told that in February and March, students usually become even more unmanageable. The reason: Cold weather keeps students from going outside to burn off energy, and with the holiday season over, kids have little to look forward to until summer.

“We have high expectations for our teachers. We don’t want their first year of teaching to be a throw-away year,” says Kern, who believes that without support, a teacher’s first year usually is a loss for students because newcomers don’t have the experience to anticipate and handle tricky situations.

“You can’t afford not to use the online group,” says Kimbrough. “You get immediate feedback from coaches, facilitators and colleagues. Whether it’s ways to deal with parents, celebrating holidays in the classroom, how to use a story—you get a response.”

Past posts on the site include queries like “What can I do about tattling in my classroom?” and “I need an assignment on Rosa Parks.” Teachers also receive practical information, says Vahey, such as online bookstore coupons and information about low-cost massages to ease stress.

Kimbrough says his coach was invaluable; for one, showing him how to teach students a way to identify the personality traits of characters in stories.

His coach modeled a technique that involved guiding students through a story. The coach had students follow along in their own copies as she read the story out loud, stopping at relevant passages and pointing out how the text illustrated traits such as courage or intelligence. The coach then gave Kimbrough a similar follow-up assignment to do with his students.

Now, he reports, his students “have such a good grasp that they are now doing character sketches. They create a character, create character traits and build a whole story around that character.”

The network’s humble beginning was in 1998, with nothing more than pizza and tears, says Vahey.

At the time, she and colleague Kavita Kapadia were leading a teaching seminar at Northwestern University. Young teachers began to approach them about how hard it was being a new teacher.

In response, the two, along with another colleague, pooled money for pizza and began holding get-togethers where new teachers could talk about a host of issues: handling report card pickup, building a classroom library or deciding what to teach.

Almost a dozen teachers attended, recalls Vahey. “We knew them real well. They were a well-educated [group] of folks that we were helping survive. Our thing was, ‘How do you keep smart people working in a system that is incredibly frustrating?'”

Eventually, what became known as the little “boutique” program caught the eye of Tony Bryk, the former director of the Center for Urban School Improvement, where Vahey and Kapadia were enrolled in professional development classes. (Bryk is now with Stanford University.)

Vahey says Bryk eventually helped them fund the program and sent her to a conference at the highly regarded New Teachers Center in Santa Cruz, Calif. There, she realized “that what we had been doing had a name: induction.”

Since then, the staff has grown to include three full-time and one part-time coach, and 17 facilitators who guide the evening meetings. While the coaches are former teachers, the facilitators are still in the classroom and have three to 10 years of experience.

The annual $690,000 price tag is currently funded by the Boeing Company, The Joyce Foundation, the Fry Family Foundation, the Arie and Ida Crown Memorial and the Illinois Board of Higher Education.

“I would love to have more money, to have more coaches, to give teachers more than six visits a year,” says Kern. “I’d like to have them in the classroom every week. We always hear, ‘We love your program, we wish we could see you more.'”

The network hopes participants eventually become teacher-leaders in their buildings.

“If I could bottle [the network] and give it to all new teachers in the world, I would,” says Kimbrough. “It is the antidote that new teachers need to stay in schools.” 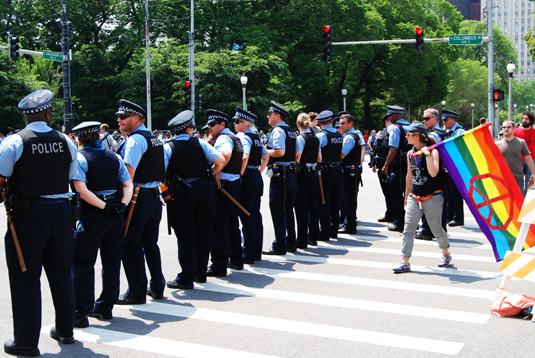 A protester wielding a peace flag walks behind a line of police officers on Jackson Boulevard and Columbus Street. Photo by Nick Moroni.