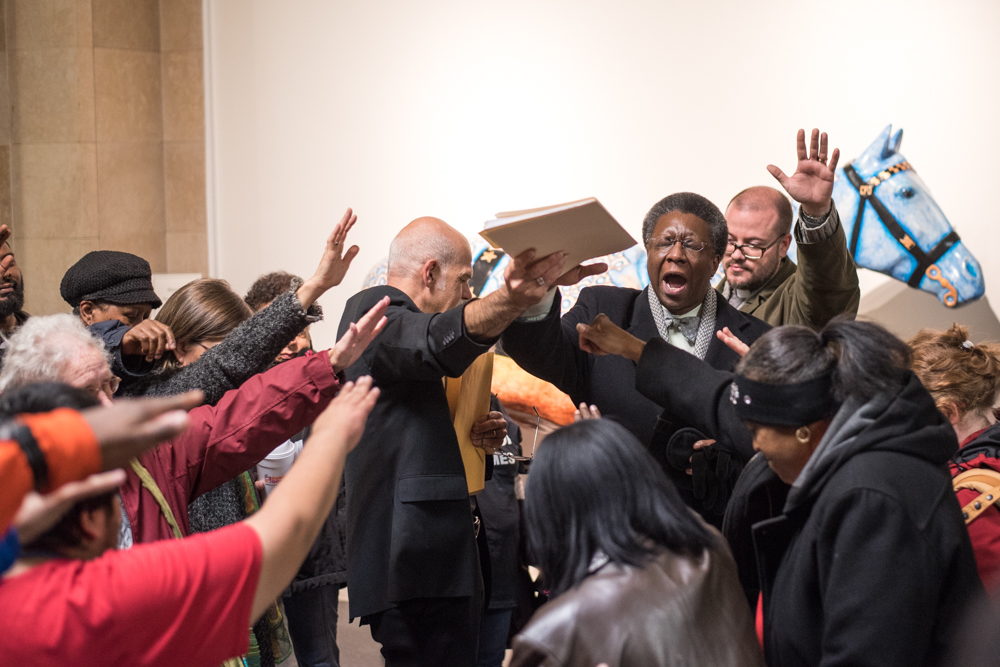 Pastor Randall Blakey of LaSalle Street Church led a prayer before petitions to keep Lathrop Homes open as public housing were delivered to a mayoral aide at City Hall on Nov. 9, 2015.

There was a good bit of misdirection and some misinformation earlier this month as developers and 1st Ward Ald. Joe Moreno presented the master plan for Lathrop Homes, the historic Chicago Housing Authority development along the North Chicago River.

The Chicago Plan Commission is scheduled to consider the planned development proposal for Lathrop on Thursday, February 18, although residents and community advocates are calling on Moreno to have the agenda item postponed.

The prime piece of misinformation at the February 3 meeting on the Lathrop development team’s plan came from Moreno, who said it would be “illegal” to rehab Lathrop as 100 percent public housing. Moreno has said inclusion of market-rate housing and a larger proportion of affordable housing are both necessary to win his support.

The alderman cited the Gautreaux case, first filed in 1966. But Gautreaux declared unconstitutional CHA’s policy of restricting new construction to black communities. It didn’t address rehab, and since then CHA has renovated several developments as entirely public housing, including Trumbull Homes on the Far South Side, which like Lathrop was originally built in the late 1930s.

Lathrop is situated squarely in what the Gautreaux court orders term an “opportunity area,” where public housing siting is encouraged. Some attorneys have sought to extend Gautreaux to essentially outlaw any CHA redevelopment that doesn’t include market-rate housing, but other lawyers – generally representing existing CHA residents – have opposed that interpretation.

In any case, no one is pressing for 100 percent public housing at Lathrop. For nearly ten years, Lathrop residents have been advocating an even split between public and affordable housing. High-end housing isn’t needed in the area, they say.

Michael Goldberg of Heartland Housing, which is part of Lathrop Community Partners, suggested developers had made significant changes to the plan – around density and building height, increased preservation and increased affordable housing – in response to community concerns. Much of this amounted to developers asking for more than they were going to get (and more than the CHA’s request for proposals specified), then scaling back. As far as affordable housing, LCP added exactly eight units – going from 212 up to 220 – since a preliminary plan was developed two years ago.

“This plan has more affordable housing than any previous proposal,” Moreno said, calling that “a very important component.” He added, “We have won so many things.”

Noting residents’ complaints about a proposed TIF supporting “chain retail,” Joy Aruguete of Bickerdike Redevelopment Corporation said TIF funds would only go to affordable housing and infrastructure. But that’s just moving money around on paper; shifting TIF from commercial to residential development just means more private financing can go to retail. And two proposed new streets (connected to nothing outside the Lathrop site) are needed only to accommodate new retail.

One change wasn’t noted: LCP increased the amount of retail from 20,000 square feet two years ago to 50,000 in the final plan. This apparently reflects a shift in the city’s planning department toward a less rigorous standard for the development. What’s planned is far more than needed for 1,200 households, and it’s not like the area around Lathrop needs more shopping (or more traffic congestion).

Like the insistence on reserving nearly half the planned units for high-end market rate housing, the proposal for excessive retail reflects the involvement of for-profit developer Related Midwest in LCP.

With the total public housing unit count at Lathrop dropping from 925 to 400, Moreno has said he won’t let the project proceed unless CHA commits in writing to replace the lost public housing ­– and replace it on the North Side. At the community meeting earlier this month, CHA’s new chief executive Eugene Jones declined to address the question.

Moreno has given CHA until Thursday to agree to the demand, saying he will postpone action at the planning commission meeting if the agency doesn’t come through.  Residents and advocates want more time for community review of a possible agreement – and for an opportunity to strengthen the commitment if need be.

The details could matter.  CHA has a long history of broken promises.  And it’s becoming a much tougher market for acquiring the kind of properties needed to replace Lathrop’s units elsewhere on the North Side.  If CHA promises its “best efforts,” the results could be disappointing.

Without care in fashioning a plan for Lathrop, it’s entirely possible that this project will repeat what’s happened throughout nearly two decades of the CHA’s Plan For Transformation: millions of taxpayer dollars spent, private developers enriched, and the supply of housing for low-income Chicagoans significantly reduced.