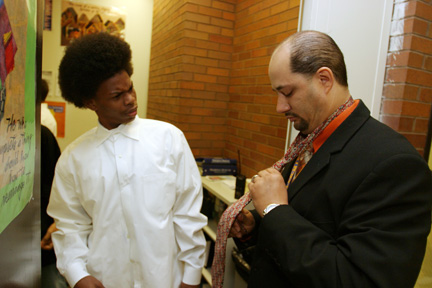 First-period class at Clemente Achievement Academy is barely underway on a recent Monday, and already 15-year-old Ramon Valentin is in trouble. After his social studies teacher assigns him a detention for disrupting the class, he curses at her and storms down the hallway.

Appearing suddenly at the doorway of student advocate Jose Diaz’s office, Ramon proceeds to pour out his troubles. “She started yelling at me and said I’ve got detention!”

As a student advocate, Diaz is charged with helping kids deal with disruptive behavior and other problems that interfere with learning. More accessible than a counselor and less threatening than a disciplinarian, advocates’ duties include monitoring kids’ attendance, tracking down truants and conferring with parents and teachers about students’ progress.

After listening patiently to Ramon’s story—he claims he got in trouble because he didn’t understand the assignment and the teacher wouldn’t explain it—Diaz questions him. “Did you go in there prepared to do work?” he asks gently. “Why don’t you have a pen and paper?”

Ramon at first refuses to take responsibility for the outburst, and his teacher sends him to complete his work in the library. But by the end of the period, after more prodding by Diaz, Ramon acknowledges his own role in creating the problem. “Sometimes I go over there, and I talk to her all dumb,” he admits.

The district pays for two advocates at each academy. So far, results are mixed: Teachers at some academies say advocates have little or no positive impact, and district officials concede that some advocates needed extra training.

But at Clemente, Diaz seems to be making a difference.

Teacher Medea Brooks, who assigned Ramon the detention, agrees with the importance of listening to kids first without leaping to reprimand them, so that they learn to regulate their own behavior.

“Mr. Diaz is phenomenal. He reaches the children where they are,” Brooks says. “[Kids] won’t trust you if you judge them early on.”

Having Diaz act as mediator has helped her become more thoughtful, Brooks adds. When Diaz explains a student’s viewpoint, “it could be the same thing the kid was saying but the delivery was different. They [advocates] get you to reflect on the energy you’re putting out.”

Consultants from Johns Hopkins, who created the Talent Development High School model that CPS used to develop its achievement academy concept, are encouraging other cities that adopt its model to consider hiring student advocates.

“If you look into the disciplinary process at most high schools, it relies on removal,” says Greg Ekey, a field manager for Talent Development. “All too often the student will just be written up, sent down to chill out in a room somewhere, or sent home for a couple of days on suspension.”

Swift intervention from an advocate can keep disruptive kids from missing too much time in class and falling farther behind, he adds.

Advocates focus solely on working with kids, rather than juggling administrative duties such as standardized testing, as counselors do. Some take on extra duties, such as tutoring or arranging college visits. Diaz, who left his job as a mortgage broker to work at Clemente, started an after-school club modeled after his church youth group.

Each Tuesday, Diaz gathers “Hope Too,” a club to discuss teen issues such as sex and drug use from a religious perspective. The club draws more than 20 kids and a handful of teachers.

“Most of our students are from a faith-based background. I’m not. This is another way to reach them,” says English teacher Jill Ward, who assists Diaz with the club.

Kids speak enthusiastically about the club. “I get to talk to an adult who can talk to me about how to do better in life,” says freshman Mark Jenkins.

Freshman Bernadette Turner says she listened when Diaz talked to her about her disruptive classroom behavior. “He’s my role model. He talks about our future. And he’s always smiling.”

Diaz, who says working as a volunteer youth minister led him to accept the student advocate position, also says he has found his life’s calling. “I fell in love with being with kids, giving them hope.”