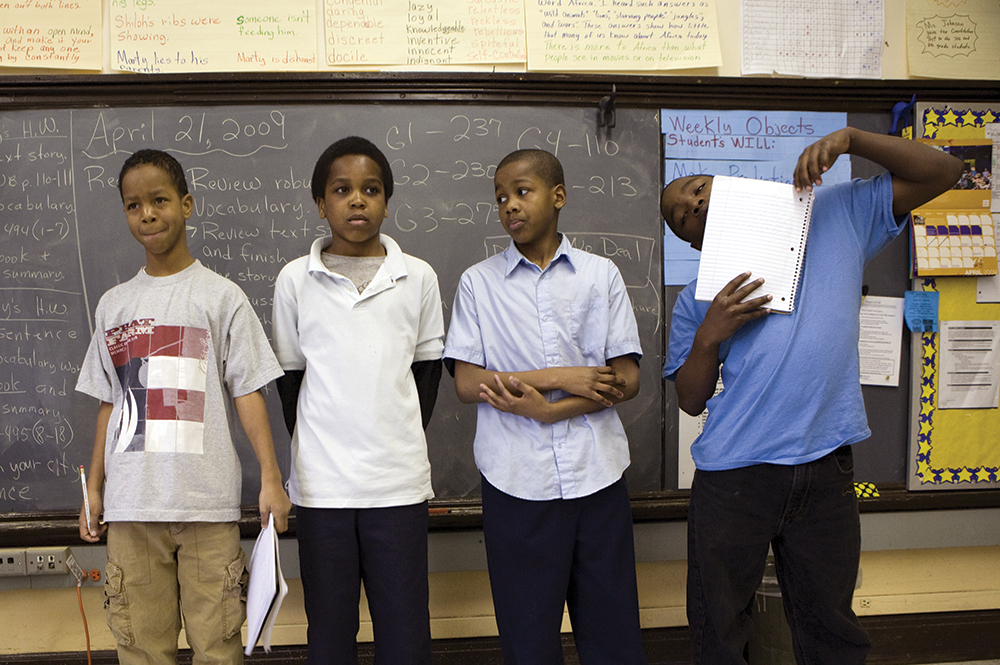 In this 2009 Catalyst photo, 6th-graders in an all-boys class at Ryerson Elementary on the West Side present their work to classmates. The principal created single-gender classes to improve discipline.

Conventional wisdom suggests that suspensions are primarily a problem in high schools. However, the advent in the late 1990s of zero-tolerance discipline policies in Chicago Public Schools had a surprising effect: a steep increase in the number of elementary student suspensions.

African-American males were most heavily impacted. In 2003, more than half of students suspended in CPS across all grade levels were African-American boys, a rate that was twice the district average. (All data for these analyses were provided by the Illinois State Board of Education.)

As Catalyst noted in its May / June 2009 issue of Catalyst In Depth, studies have established a strong correlation between suspensions, course failures and dropping out. For one, suspensions keep students out of class, often leaving them behind.

By 2006, CPS had officially scrapped its zero-tolerance policy in favor of a restorative justice approach, which encourages students to make restitution and reflect on their behavior in order to improve it. Yet by 2008, the number of suspensions throughout the district had nearly doubled from 2003. And racial disparities persisted: in 2008, one of every four African-American male students was suspended at least once.

The shocking upward spike prompted local and national advocates to call for an investigation by the Office of Civil Rights in the U.S. Department of Education. Local youth advocates also launched a campaign pushing for federal and state policy to address excessive and disproportionate use of suspensions.

By 2013, district leaders were trumpeting a 23 percent decline in suspensions within district-run high schools, but overlooked the fact that those high schools had seen an enrollment decline of more than 6,000 students.

Meanwhile, enrollment increased at charter high schools, where CPS did not collect data on suspensions.

At the same time, suspensions continued to increase in the elementary grades — even in pre-kindergarten and kindergarten, although the CPS Student Code of Conduct prohibits suspending such young students.

Some good news arrived in the 2014 and 2015 school years — official numbers of suspensions dropped and a report from the Consortium on Chicago School Research showed that teachers and students felt safer as harsh discipline practices eased.

On the federal level, the U.S. Department of Education teamed up with the Department of Justice to produce guidelines aimed at reducing  suspensions and ensuring greater equity in school disciplinary practices — as the issues were national, not just in Chicago.

In August, Gov. Bruce Rauner signed SB 100, a far-reaching effort to reduce suspensions and expulsions statewide. The new law gives all Illinois public schools, including charter schools, one year to update their discipline policies to comply with the new requirements. As reported in Education Week, they are:

Though advocates hailed the new law as an important step toward ending the “school-to-prison pipeline,” enforcing it will likely present challenges. A big hurdle is the scant resources available for training and supporting staff in restorative justice practices.

In 2014, CPS revised its policies to prohibit suspending children in 2nd grade or younger, yet 368 kindergartners were suspended that year, including 55 for five days or more.