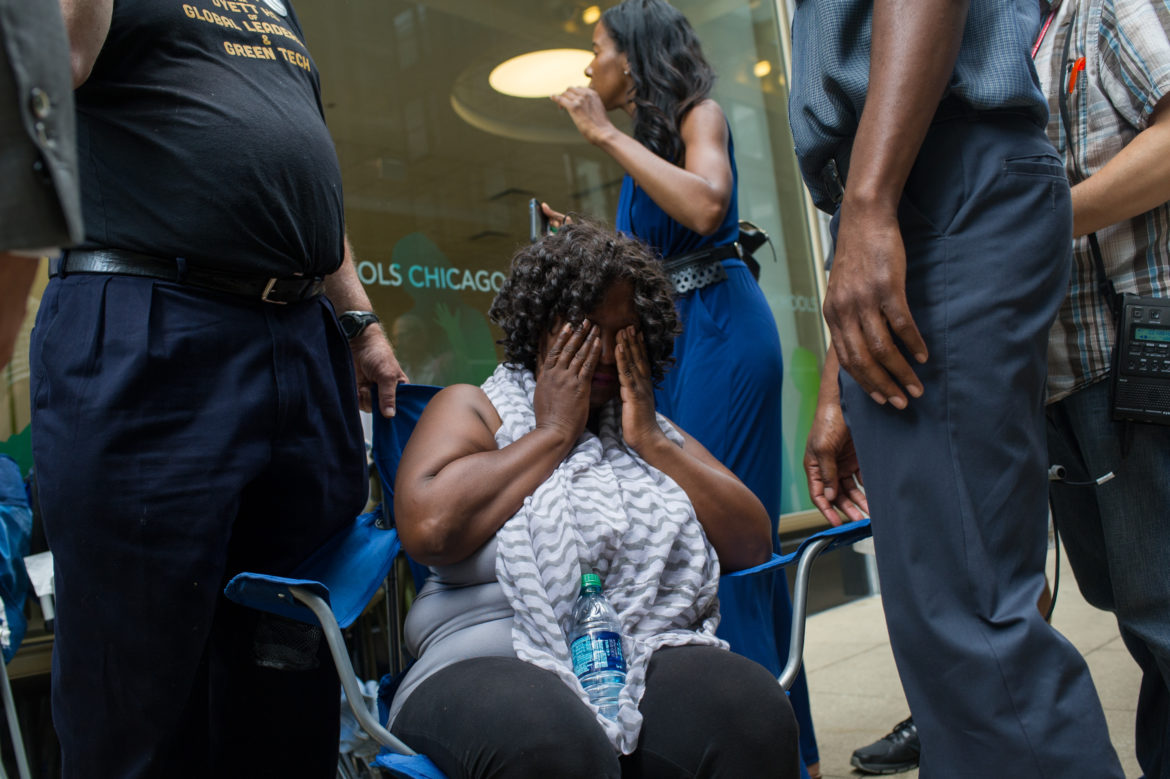 Irene Robinson says she is disappointed with the CPS decision on Dyett and will continue a hunger strike.

Dyett High School will reopen a year from now as a neighborhood high school, but not with a focus on green energy, as community activists have been demanding for years — most recently through a hunger strike that is now on its 18th day.

Nor will the Washington Park school have a focus on sports business, as the former principal proposed, or become a privately run contract school focused on the arts, as an arts organization proposed.

Instead, CPS officials announced Thursday, Dyett will be an open-enrollment, arts-focused neighborhood high school and community innovation lab. CPS officials said the school will keep its name, thereby continuing to honor the legacy of Walter H. Dyett, a CPS music teacher credited with producing some of Chicago’s best jazz artists.

“It is something that really represents the will of the community, and more importantly than anything else, the needs of the children who live in Bronzeville and the surrounding areas,” said CPS CEO Forrest Claypool during a press conference at CPS Central Office.

Claypool said he and other officials spent hours meeting with South Side community leaders and looking at enrollment data, curriculum and community needs before coming up with the plan.

School leaders and elected officials tried to frame the decision as a “compromise” that took from the three proposals submitted earlier this year as part of a Request for Proposals (RFP) process.

But activists who have been starving themselves since Aug. 17 — they’re eating no solid foods, but are still drinking liquids — to protest what they consider a “sham” RFP process, saw it as another example of how CPS has ignored and disrespected the African-American community.

“We are happy the school is opening as a neighborhood CPS-run school,” says Jitu Brown, a longtime activist with the Kenwood Oakland Community Organization (KOCO) and one of the 12 hunger strikers. “All is not lost. But what we want is what the community demanded.”

Brown pointed out that the Dyett activists had called for a “green technology” school, not a “technology school.” And he demanded to see evidence that there was community support behind an arts school: “If there’s been input, CPS needs to produce it and compare it with our proposal.”

Brown responded to the board’s decision as he and another hunger striker headed back to Chicago Thursday afternoon after having taken their cause to U.S. Secretary of Education Arne Duncan in Washington, D.C. Brown said all the activists needed to regroup to process the CPS announcement.

In the meantime, activists assured that the hunger strike would continue.

During Thursday’s press conference, CPS officials said that the new Dyett High School, at capacity, will enroll 550 students. The plan is to scale up enrollment over four years, starting with 150 freshmen in the fall of 2016.

The school had been phased out, one grade at a time, starting in 2012 under then-CPS CEO Jean-Claude Brizard. The school’s final class — just 13 seniors — graduated in June.

Claypool said that an arts focus would help the school build and maintain enrollment  because there are hundreds of South Side students who apply to arts schools in CPS but are unable to win seats.

Low enrollment and academic performance prompted the decision to close the school.

Janice Jackson, CPS chief education officer, said the goal is to accept all students from the neighborhood who apply before opening remaining seats to a citywide lottery. The district will hire a principal immediately, she said, so the new leader can start to work on the school’s focus and reach out to artists who live and work on the South Side.

“I know it’s been a long run, and there are many feelings associated with it,” said Jackson, who oversaw Dyett during a brief stint as its area network chief before being promoted to Central Office this summer. “But we should see this as a win for the community.”

CPS gave few details about the technology lab that will be part of Dyett, apart from saying that the Illinois Institute of Technology has agreed to be a partner. The lab will be open to students outside Dyett and will be used to train teachers and principals. CPS has pledged to invest resources in building the lab, though the start-up costs haven’t been calculated yet, Claypool said.

CPS also plans to partner with the Chicago Park District to keep Dyett’s pool, gym and meeting rooms open to the community when students aren’t using them.

There was no mention of either the University of Illinois at Chicago’s School of Education or the Chicago Botanical Gardens, both of which had agreed to partner with Dyett under the proposal submitted by activists.

District officials informed Dyett activists of their decision only a few minutes before the public announcement  — and barred them from joining the press conference. However, Claypool said he invited activists to be part of the process of reopening Dyett over the next year.

CPS did invite to the press conference several African-American elected officials from the area, including Ald. Will Burns, U.S. Rep. Bobby Rush, and state Rep. Christian Mitchell, in addition to Chris Harris, a pastor who’s part of the Bronzeville Community Action Council. “CPS has heard the community,” Harris said. Then he cautioned: “There is more listening to do.”

Burns said it didn’t matter whose proposal had been chosen, as long as Bronzeville-area students had access to a high quality high school in the neighborhood.

“We all fought for Dyett together,” said Burns, who vehemently opposed the Dyett activists’ proposal. “We need an arts high school that teaches people to be critics and people who can provide a vision of how the world should be.”

Still, activists have long worried that arts will be used as a way to gentrify the neighborhood and displace poor black families. Washington Park is already being considered as a potential site for the planned Barack Obama presidential library.

During the press conference, Claypool pointed out that his administration had “inherited” the process from former CEO Barbara Byrd-Bennett, who stepped down earlier this year under the cloud of a federal investigation into a no-bid contract.

Some CPS insiders have criticized Byrd-Bennett for making the surprising decision last October to accept proposals to reopen Dyett in the 2016-2017 school year, even though there were worries that enrollment trends wouldn’t support a high school.

A coalition of activists and community groups, who had long argued the district had deliberately “starved” the school before phasing it out, seized on the opportunity and proposed to reopen the school as the Dyett Global Leadership and Green Technology Community High School. They’d already drafted a plan  with help from KOCO, the Chicago Teachers Union, faculty from the University of Illinois at Chicago and the Annenberg Institute for School Reform.

But the activists criticized the RFP process, questioning why CPS accepted a proposal from Dyett’s principal to reopen the school with a sports theme after the district’s own deadline. Then in August, when CPS was supposed to hold a public hearing and make a final decision on the school, district officials abruptly announced a one-month delay.

At the time, Claypool was just taking over the role of CEO, and Frank Clark was just becoming School Board president, succeeding the outgoing David Vitale. Claypool said he and others needed more time to do their “due diligence” in evaluating the proposals.

Parents and community activists began a hunger strike on Aug. 17, calling for an immediate decision on Dyett’s fate. The protest received little media attention at first but gained more traction in the second week as #FightForDyett began trending on social media and national news outlets picked up the story, generating more local protests.

During last week’s board meeting, two board members called for a resolution of the situation. This week, during two public hearings over the city’s budget, Dyett activists took center stage, questioning Mayor Rahm Emanuel on the issue and even shutting down the second hearing.

Activists planned to attend a third and final hearing tonight at Wright College.

“I will continue to be on this hunger strike until we get the Dyett Global Leadership and Green Technology school,” said Irene Robinson, a grandmother and member of the Local School Council at Mollison Elementary, a feeder school to Dyett. “This is not right,” she said before breaking into tears.

Jesse Sharkey, vice president of the Chicago Teachers Union, which has worked closely with the Dyett hunger strikers, said he was hesitant to say much about the district’s announcement until after activists regroup. But he said the decision is at least a partial victory.

“Remember that they tried to close this school,” he said. “Our concerted voice has forced the mayor to backtrack on at least part of their plans.”

It’s not quite the same level of success that another group of parent activists had back in 2001, when a 19-day hunger strike — led by a community group headed at the time by Jesus “Chuy” Garcia — helped pave the way to building the Little Village high school campus the community wanted.

But longtime political observer Dick Simpson still considers the decision on Dyett indicative of an important change in approach for Emanuel.

“I think it’s a sign that we’ve entered a sort of new political era where community efforts and protests may have more of an effect than in the past,” said Simpson, a former city alderman who now teaches political science at the University of Illinois at Chicago.

He said Emanuel’s participation in public hearings about the city budget this week — something he hadn’t done since his first year in office — is another example. The two decisions are likely connected to Emanuel’s inability to win re-election outright earlier this spring and the bleak financial outlook in both City Hall and CPS, Simpson added.

“They’ve realized that getting consensus and support of the citizenry,” he said, “is more significant than ramming through projects from City Hall.”