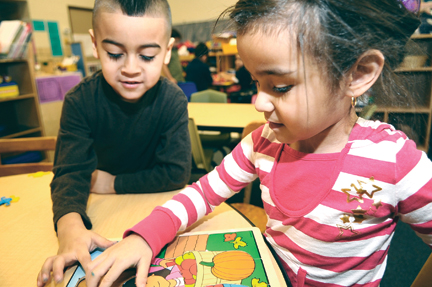 Although the common-core standards are calibrated to ensure that students leave K-12 schools ready for work and college, they are also posing challenges for the educators who work with children just starting out their school careers.

As 46 states and the District of Columbia work this year to put the new curricular guidelines in place, preschool and early-childhood educators are determining how to balance the common standards’ emphasis on increasing and measuring academic rigor with research findings on young children’s developmental needs, which place a high value on play, the arts, social skills, and integrated instruction.

“We have to be careful that those standards, particularly as they extend downward, appropriately recognize these important social, communication, and self-regulation skills that are really as critical for kids’ learning in those early and later years as whether they know the alphabet,” said Robert C. Pianta, the dean of the Curry School of Education at the University of Virginia, in Charlottesville.

Every state has guidelines outlining what preschool-age children should be able to do in a number of developmental domains, according to a 2007 review of states’ policies published in the journal Early Childhood Research & Practice. But in the 2011-12 school year, fourteen states rolled out the common-core standards for kindergarten, K-1, or K-2, according to Carrie Heath Phillips of the Council of Chief State School Officers, and that puts issues of school readiness and the content of those preschool skill guidelines in the spotlight.

The latest Race to the Top competition from the U.S. Department of Education also supports the idea that college- and career-readiness has to start even before a child enters kindergarten. It’s offering $500 million for states with plans to improve early-learning programs. Thirty-five states, the District of Columbia, and Puerto Rico have submitted applications. Most of those states or territories have adopted the common core, which means their early-years plans must reflect the new standards’ expectations.

The federal Head Start preschool program for disadvantaged children has also felt the influence of the Common Core State Standards Initiative: It recently aligned its Child Development and Early Learning Framework with the common core.

Mari E. Blaustein, the director of early-childhood initiatives at the Source for Learning, a Virginia-based nonprofit that develops educational resources, which partnered with the National Head Start Association on the task, said correlating the Head Start framework with common-core standards made sense, as both sets of guidelines are used in multiple states.

Still, there are no plans to create nationwide common-core standards in the mold of the K-12 standards for early childhood, said representatives of the National Governors’ Association and the Council of Chief State School Officers, which coordinated the common-core initiative.

“There’s no doubt that what goes on in early-childhood programs needs to be informed, shaped, and aligned with what students are going to start with in kindergarten, but there’s not a national plan,” said Michael Cohen, the president of Achieve, a Washington-based organization that helped design the common-core standards for English/language arts and math.

As they look on their own to improve their pre-K programs, states have started to write common-core-based guidelines for early childhood, attempting to balance existing guidelines, the common core’s higher academic standards, and the Head Start framework. But standards for early childhood are also shaped by knowledge about child development, society’s values, and goals for what children should be able to do at the end of their education, said Sharon Lynn Kagan, a professor of early childhood and family policy and a co-director of the National Center for Children and Families at Teachers College, Columbia University.

“It’s a pivotal time for early childhood. Early childhood has got to rise to the occasion and really think hard about what its values are and what it wants to transmit,” she said.

Just what those values are and which standards and assessments best reflect them is the subject of research—and debate. There is an increasing focus on preparing children for rigorous, college-bound English/language arts and math standards, but many early childhood researchers and advocates say that time for play, the arts, and developing communication and executive-function skills are more important for young children—and that young children’s irregular development patterns make assessing specific academic skills difficult and even misguided.

Gillian D. McNamee, a professor of teacher education at the Erikson Institute, in Chicago, said: “With young children, art and physical movement aren’t a frill. They are the disciplines that offer resources for the expression and the development of ideas.”

The common-core standards only address math and literacy, but Ms. McNamee said even adding science, social studies, or fine arts standards wouldn’t reflect how profoundly integrated learning is in the early years.

Ms. McNamee also said children’s irregular development cycles argue against testing them against a rigid, even progression of standards. Head Start Executive Director Yasmina Vinci said that is why her organization’s framework doesn’t lay out specific academic requirements for its young students.

Mr. Meisels said it is important that the early-childhood community’s voice be heard as new teaching guidelines take shape.

“People are happy to say early childhood is important. But when it comes time to sit down around the table, I’m not sure they remember to invite early-childhood folks,” he said.

Many of these issues are relevant to early elementary students, too, some educators say.

Edward Miller, a senior researcher at the Alliance for Childhood, an advocacy group based in New York, said, “We feel that the early-education [K-12] standards—particularly the kindergarten standards, but also early the elementary grade standards—in the common core are a disaster, and are going to greatly worsen what is already a crisis situation in early-childhood education.”

“I’m not opposed to the idea of standards,” Mr. Miller said. “We know a lot about what children need in order to be successful. But it has very little to do with very narrowly defined bits of knowledge. . . . If you expect every 5-year-old to be able to read and drill them on reading skills, the ones who don’t get it are defined by the schools and by themselves as failures.”

Educators around the country are grappling with these same issues as they put standards into practice: “What does rigor look like in a 1st or 2nd grade classroom? How do you support students while achieving rigor?” said Mark Baumgartner, the director of professional issues for the Cleveland Teachers Union. Cleveland has initiated a professional-development effort to help teachers answer those questions as they transition to the common core, Mr. Baumgartner said.

The approach to alignment with the common core—or with K-12 education in general—varies from state to state.

“Right now as it stands, most states say that their early-learning guidelines—which could be for birth-to-pre-K or just 3- to-5-year-olds—align with K-12, or at least with kindergarten. But the depth of that alignment varies,” said Laura Bornfreund, a policy analyst for an early-education initiative begun by the New America Foundation, a think tank and policy institute based in Washington and Sacramento, Calif. Some states have undertaken detailed rewritings to link up with the common-core standards, as in Maryland, while others, like Arkansas, have designed charts showing how their frameworks connect to K-12 standards or Head Start.

States may also face challenges in creating assessments for early-childhood curricula and standards.

“Assessing and evaluating children’s outcomes is expensive and tricky. It’s with a workforce that’s less trained than any other education workforce,” said Karen J. Cadigan, the director of the Minnesota education department’s office of early learning. Ongoing budget concerns mean that money for that kind of professional development and program components can be hard to come by.

Ms. Cadigan also pointed to a challenge peculiar to the early-childhood world: “Even if you tried, you couldn’t find every 4-year-old in the state.” Because early-childhood education is not funded or regulated in the same way as K-12, providers range from tiny, private, home-based daycare centers to fully aligned, state-funded programs. Even programs like Head Start serve only a small portion of the population that qualifies.

In a few states, all licensed providers must use state guidelines, but more often, the guidelines are required of state-funded programs and voluntary elsewhere.

Ahead of the Curve

Despite the difficulties, some states have been working towards aligning pre-K standards and curricula with K-12 standards since the early 2000s, even before the common core.

Jim J. Lesko, the director of early development and learning resources for Delaware’s education department, said his state’s efforts to do so had been well-received.

“People do want their children to be ready to be successful in kindergarten, and we understand much better now what we need to do to help support children’s learning prior to kindergarten so they come to school with skills they need.” Mr. Lesko emphasized that Delaware’s early-learning guidelines “focus on all domains of learning, not just reading and math.”

“We worked to make a fully integrated elementary curriculum, then took a step back to make sure pre-K was integrated,” said Janine Bacquie, the director of the district’s division of early-childhood programs and services.

Martin Creel, the director of the school district’s department of enriched and innovative programs, said that when the 144,064-student district hosted “parent academies” to demystify the new curriculum, many parents’ concerns were linked to the name: “They thought ‘common’ meant low and ‘core’ meant basic.” But when the standards were presented as part of an effort to learn from international best practices and embedded in a curriculum that also focuses on skills like cooperation and critical thinking, parents got on board, he said.

Montgomery County kindergarten teacher Juliet D. Wolf said that the common core has been a positive change, allowing teachers to be more rigorous and focus on fewer topics, but said other parts of the curriculum have been even more important.

“It changed the way we’re delivering content,” she said. “We’re spending more time on creative-thinking skills, getting kids to think about how they’re thinking and collaborating more.”

In most places, however, thinking P-12 is not the status quo, according to experts. But, said Shannon Ayers, an assistant research professor with the National Institute for Early Education Research at Rutgers University in New Jersey: “Having some alignment between pre-K and K in the future is important for teachers, kids, and parents. It transforms pre-K and says, this is real school. Because what we’re doing in pre-K is leading and connected to what they’ll do in K, 1, 2 and beyond.”

“What never served early childhood well was when we were seen as a separate entity,” said Shari Ostrow Scher, an early-childhood specialist in Frederick, Md., who has been in the field for 20 years. “You can’t have really meaningful early-childhood education and not have it tied to the entire flow of curriculum and what children learn.” 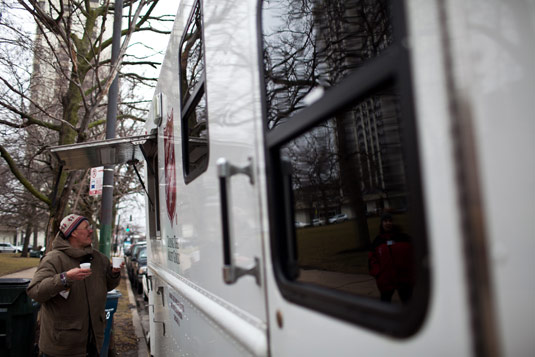 A local man receives some food during a stop at Wilson Avenue and Marine Drive in Uptown. Photo by Jonathan Gibby