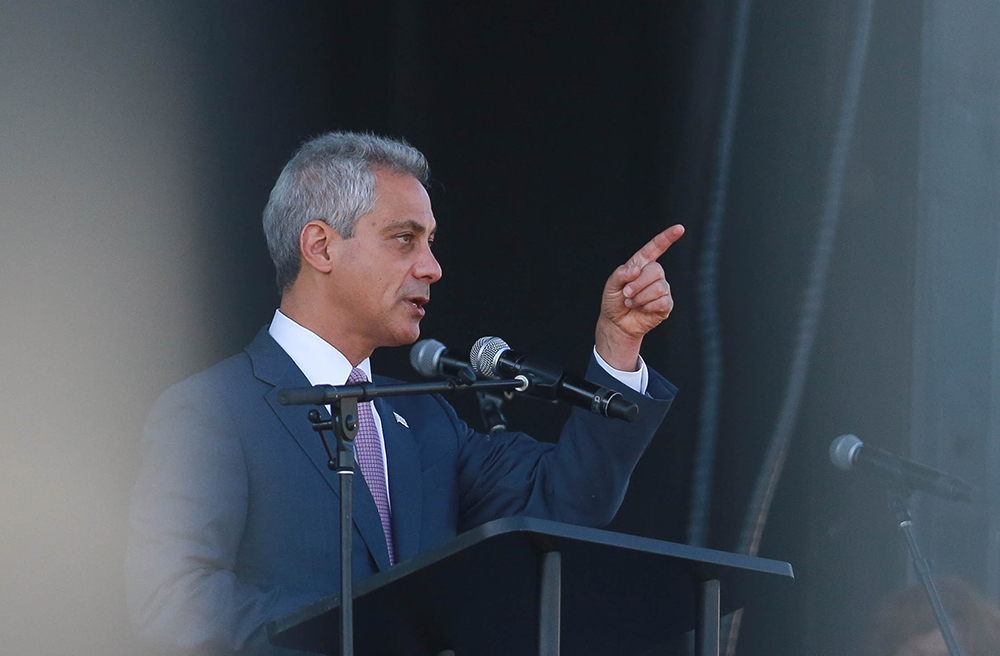 Mayor Rahm Emanuel’s campaign theme, as you may have noticed, is about being “tough.”

“Rahm Emanuel has made the tough decisions for Chicago’s future and we are seeing the results,” according to one of the ever-present Internet ads that crossed my screen last night.

Looking over the record, though, it’s hard to find major “tough decisions” — where Emanuel risked political capital to go against the popular will — except one: the massive school closing of 2013.

Getting the city’s finances in order?  Whatever he’s done was accomplished with a combination of backdoor fees and fines and refinancing bond debt far into the future.  Thousands of city jobs were cut or privatized, but it was done a few hundred at a time. Early in his term, Emanuel reduced library hours and closed half the city’s mental health clinics, for minimal cost savings, but the opposition those moves met ensured he wouldn’t go there again.

Pension reform?  Emanuel put in place a scheme that’s likely to be ruled unconstitutional, but only after the election.  It was a placeholder for whatever he’s really planning —  which he isn’t talking about.

Holding the line of TIF subsidies for developers and corporations? Finding the money to hire more police?  No.

How about when he “took on politicians and businesses that opposed raising the minimum wage,” as one of his mailers puts it.  We all know the truth about that one.

Standing up to the Chicago Teachers Union and toughing out a strike?  I don’t think that qualifies.  First he helped pass state legislation designed to prevent a teachers strike.  Then, according to the Chicago Tribune, he bumbled into a strike more out of incompetence than principle.

(He tried to spin the strike outcome as a victory in which he won a longer school day, but in fact agreement on that was reached weeks before teachers went out.)

No, closing all those schools was Emanuel’s only real “tough decision.”  And it was his decision alone, if reports are accurate that the mayor’s school closing commission initially favored limiting closings to 20 schools, and CPS chief Barbara Byrd-Bennett advised closing no more than 40.

Emanuel now says the closings were necessary because kids were “trapped” in schools that were underenrolled and underperforming.  But in hearings before the closings, thousands of parents challenged CPS’ utilization standards — which discount special-education needs and support programming from nonprofits and community groups, and reflect larger class sizes than elsewhere in the state — as well as the district’s performance metrics.

Hearing officers who recommend that schools be kept open — or that CPS consider factors like school culture or planned housing development — were overruled, apparently at the mayor’s insistence.

The mayor’s argument that underutilization dictated the closings lost credibility when CPS continued opening charter schools last year, some in the very neighborhoods where schools had just been closed.  His argument that the move would free up resources for other schools was undermined by budget cuts that subsequently hit neighborhood schools across the city.

The whole process was an elaborate ruse to conceal an agenda of privatizing schools.  It’s an agenda the mayor is certain to push forward if he’s re-elected — especially with his school reform ally Bruce Rauner now occupying the governor’s seat.

The rhetoric of “tough decisions” is designed to make his stance look heroic.  In truth it was both dictatorial and sneaky.

The mayor’s top challenger, Jesus “Chuy” Garcia, has promised smaller class sizes, less standardized testing and more support services for kids who need help.  He envisions schools as “centers of the community” serving youth and adults with after school and evening programs.

Key to this “education revolution” is “taking pay-to-play insider deals and big-finance profit-taking out of the public school system,” according to Garcia.  He points to Emanuel’s support of school board member Deborah Quazzo, who has  investments in online test-prep companies that contract with local schools; of costly interest-rate swaps; of expensive “social impact bonds” to finance early education expansion.

There’s no independent governance or oversight by the Board of Education — appointed by the mayor, it does what he says.  And of course, unlike other Illinois towns and cities, we can’t vote against them.

So one question Chicagoans should consider when they go in the voting booth is this: Do you trust Rahm Emanuel with the future of the city’s schools?