In one way, Woodson South Elementary is ahead in the technology game in Chicago Public Schools. The Grand Boulevard school has enough computers to put it at the national average, according to a Catalyst Chicago survey.

More typically, though, most teachers at Woodson are still using only basic software such as Microsoft Word, says Larry Spearman, the school’s technology coordinator. One well-known educational software package, Accelerated Reader, “is sitting downstairs,” he points out. “The teachers have to be trained on it.”

Spearman, however, had little time to train teachers to use more sophisticated software last school year, and will have virtually none this fall. He expects to be back in the classroom, teaching computer basics, because of budget cuts. Even last year, he was strapped for time to do it all—train teachers, do computer repairs and supervise the computer lab. “If I wanted to get something done, I came early in the morning or I stayed after school,” he says.

Woodson South is one of 278 schools surveyed by Catalyst to determine the number of computers they had available; how satisfied they were with students’ access; whether teachers had adequate training and were using technology in the classroom; and what barriers, such as lack of money and staff, prevent better use of technology in classrooms.

Catalyst found that, overall, Chicago Public Schools trails the nation in student access to computers with Internet capability. The average for schools surveyed is just over five students for every computer; Woodson South’s ratio is 3-to-1. The nationwide ratio is 4-to-1, according to the most recent survey by the National Center for Education Statistics, conducted in 2003. The district’s average, calculated by Catalyst using data from the Office of Technology Services, is 6.5-to-1. (Including those computers not connected to the Internet, the board maintains its ratio is 5-to-1.)

Among the other findings:

* Not surprisingly, access varies widely from school to school. Some schools, like the Al Raby small school in the former Flower High building in East Garfield Park, and the re-opened Lindblom Math and Science Academy in Englewood, have more than one computer for each student. Others, such as Penn Elementary in North Lawndale and McKay Elementary in Chicago Lawn, have about 20 students for every computer. Overall, 101 schools surveyed are at the national average or better.

“In urban settings, there always is a wide variability from school to school,” says Linda Roberts, an education consultant who was director of the Office of Educational Technology during the Bill Clinton administration. Urban districts often have a number of older buildings and have a hard time upgrading infrastructure, such as wiring, to accommodate new technology, she says.

* About half of respondents said lack of money is the biggest barrier to better computer access and tech support. Forty percent of schools said tech support was “inadequate to support teachers’ classroom needs.”

* Nearly three-fourths of schools reported using technology to teach reading. Almost half reported using it to teach math and science; a third, to teach social studies. (Schools could choose more than one subject.)

* More than half of schools said most teachers had adequate training in technology and were using it in the classroom. Asked about the software teachers were most likely to use, however, most schools cited common programs such as Microsoft Word. Only about 10 percent of schools cited educational software, such as Accelerated Reader, which quizzes students on books they read.

The challenge: scaling up

CPS is pushing schools to join their Tech|XL computer leasing program, which allows it to upgrade computers regularly, and says its goal is to level the playing field so that each school has a ratio of five students to every computer. The district is also working to improve training on integrating technology into the curriculum.

“In many large urban districts there are outstanding and highly effective examples of technology use, in a specific school or group of schools,” notes Roberts. “The real challenge is scaling up those islands of excellence to the entire system.”

Ann Flynn, director of technology for the National School Boards Association, says Chicago has the leadership to take on that task. Flynn has visited Chicago and served on panels with Sharnell Jackson, chief e-learning officer for the district.

“I’m not going to say Chicago’s solved all those issues, but it’s going a long way,” she says. “In other districts, I see folks who have committed a great deal of funds to technology, who seem to be doing it in a more piecemeal fashion. The vision driving it is not as clearly articulated as [Jackson] has been able to do.”

Despite efforts to push Tech|XL, many schools are still buying computers on their own. In fiscal year 2006, schools spent about $30 million buying computers with poverty funds. Schools that raise private funds can spend them any way they like, and often choose to invest in technology, says Rachel O’Konis, spokesperson for technology services.

Teachers use a variety of educational software with students, such as games that reinforce math facts and short videos to explain math concepts. Students use computers to create projects for science fairs and cultural heritage festivals.

“A good portion of the 5th- and 6th-grade kids are probably more computer literate than I am,” Pawelski observes. Achievement has risen since the school began using technology on a wider scale, but Pawelski points out that “it’s just one of many tools.”

Although 59 percent of schools said their tech support was adequate, 26 percent cited lack of a full-time tech coordinator as a major barrier to better tech support.

“The board should pay for a tech person,” says Principal Maurice Harvey of Jordan Elementary in Rogers Park.

Increasingly complicated software makes it hard for schools to do without an on-site tech person. “CPS doesn’t have positions for them and doesn’t have salary for them. [Yet] they keep putting new stuff on the computers that can’t be handled without a tech coordinator,” observes Don York, co-director of the CPS/University of Chicago Internet Project, which aims to help schools do a better job of integrating technology into the curriculum.

The district, however, says it can’t pay for a tech coordinator in every school.

“We’ve done the math,” says Robert Runcie, chief information officer for the district. “It would cost over $40 million a year. The district cannot afford it unless the state improves the overall funding picture.”

Runcie says his office is encouraging schools to use the district’s tech support services, then free teachers to do technology integration—a move that requires dipping into discretionary funds. “A tech coordinator should be working with colleagues, not involved in the low-result activity of tech support,” he says. “We want to do that for schools and get them out of that business.”

Still, about 20 schools surveyed directly criticized the district’s tech support. Runcie acknowledges schools are skeptical. “It boils down to trust. OTS has got to continue to win the trust of the schools that we will service.”

According to a 2005 survey of principals conducted by the Consortium on Chicago School Research, elementary schools with the lowest poverty rates and less poverty money were less likely to have a full-time technology coordinator than those with the highest poverty rates.

Frequently, tech coordinators double as teachers or even assistant principals.

Spending restrictions on federal e-rate money—it cannot be used for staff or training—contribute to the problem, observes Linda Newsome, technology coordinator at Jones College Prep in the South Loop.

“I would like to see them take 25 percent of whatever they were going to spend on hardware and put it in human resources, including staff development,” she advises.

“You can see all the beautiful computers across the city, but without that human support and the training that’s needed to keep it going, it is not working,” Newsome adds. “It works at Jones because of my tenacity and because of my assistant, but every year I worry which one of us is going to lose our job because of budget cuts.”

Roberts says successful technology initiatives, like Maine’s laptop giveaway for middle-school students, take teacher training seriously. “What they focused on first was making sure every teacher in Maine had the professional development and the training to use the computers [with students] when they came into the schools.”

In Chicago, even district officials question the quality of training many teachers have received.

Jackson says past training was often “one-shots” or worse. For instance, in spring 2002, every high school teacher got a laptop—but no training.

The district’s latest assessment of technology proficiency among teachers shows dismal results. A small portion of the test measures teachers’ ability to integrate technology, but most of it examines their use of Excel, e-mail or other common applications. Still, only about 14 percent of teachers met proficiency benchmarks.

“At my school, at least 80 percent of the teachers do not know how to integrate technology,” observes Gary Latman, who oversees technology at Harper High in Englewood. “For them, the computer is a giant encyclopedia or a very fancy typewriter. We don’t even have enough teachers who use PowerPoint or Excel,”

Jackson’s office has created a training curriculum, observes Julie Kelley, a tech coordinator at Falconer who also trains other teachers for the district. And training is getting better. “From the board’s end, there’s been improvement this year,” she adds.

Some Catalyst survey respondents said more training needs to be offered at teachers’ home schools. At Falconer, having on-site training made a big difference in teacher interest. “We did a survey,” says reading specialist Mary Fran Bubak. “They don’t want to go to other schools.”

“Teachers are all over the place with what they bring to the table. But the trend is good,” observes Shaz Rasul, managing director of the CPS/University of Chicago Internet Project.

Though teachers may not have learned all the fanciest bells and whistles, what they are using is substantive, says Roberts.

Tools like Microsoft Word and Excel “are ways to amplifying learning across the curriculum,” she says “Word is for writing. PowerPoint is a way to present ideas. Excel is a very important tool for looking at data and statistics, especially in the sciences.”

One of Jackson’s priorities has been to make more online training available, because it is convenient and cost-effective. “In that arena,” observes Flynn of the National School Boards Association, “Chicago seems to be a real leader.”

Contributing to this report was Edie Rubinowitz, who produced and reported a related two-part documentary on technology in classrooms for Chicago Public Radio 91.5 FM. To listen to her report and others that have aired this year as part of its Chicago Matters: Valuing Education series, click here.

To contact Maureen Kelleher, send an e-mail to editor@catalyst-chicago.org. 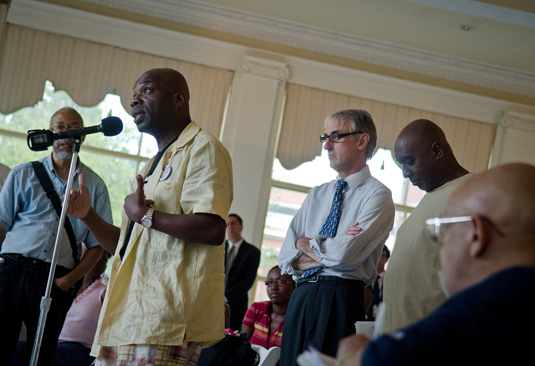 Wallace Gator Bradley, urban translator and activist, gave his many concerns and talked about the difference this renewal project is to the ones in the past.