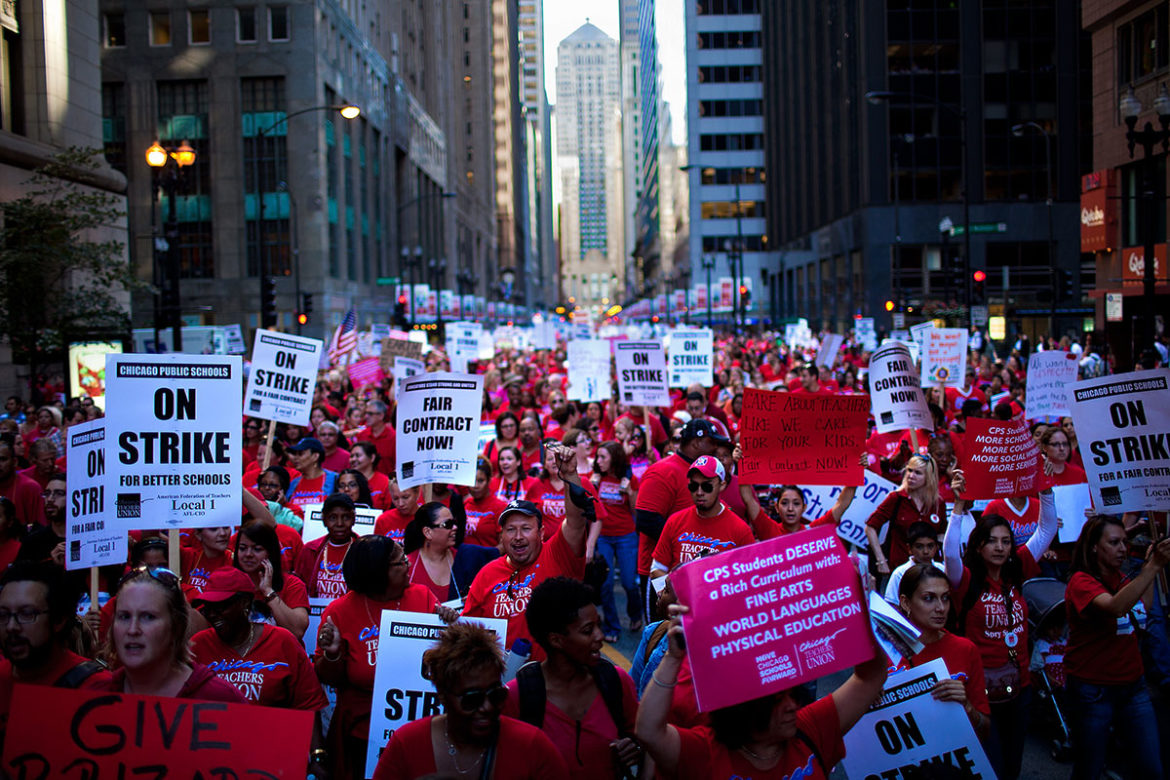 Thousands of demonstrators march toward City Hall during a protest to support the Chicago Teachers Union strike on Sept. 10, 2012.

Like all strikes — and many other things in this world — the Chicago Teachers Union walkout comes down to money and power.

It’s not like the 2012 strike, in which teachers stood up to a new mayor who had made clear he wanted to weaken their union and advance a privatization agenda.

This time, after years of fending off cuts — and with a new mayor who ran on an educational equity platform — teachers see an opportunity to win major improvements on compensation and broader issues.

A strike may also have been necessary to get the union’s mojo back after its support for Cook County Board President Toni Preckwinkle’s mayoral candidacy — despite Lori Lightfoot’s backing much of the union’s agenda and Preckwinkle’s record promoting charter schools and gentrification — yielded such dismal results. Lightfoot won more votes than any mayoral candidate since 1999.

This strike is also not like one that greeted another newly-elected mayor: the 15-day walkout six months into Harold Washington’s first term in 1983. Then a school board and superintendent appointed by Washington’s predecessor demanded teachers take a wage freeze, unless they would accept layoffs to finance small pay hikes. In the last of three teacher strikes under Washington, in 1987, teachers got an 8% increase over two years and 1,700 teachers and others were laid off.

Like Lightfoot, Washington came into office announcing the city’s fiscal crisis was worse than previously known and instituted a hiring freeze. Unlike Lightfoot, he took a hands-off approach to the contract negotiations — during his campaign he had denounced Mayor Richard J. Daley’s method of dictating terms of settlements — and he was criticized for it. He also said the city had no funds to contribute to a settlement.

In that bitterly divided political environment, some Washington supporters charged (without any basis) that the teachers strike was a conspiracy by the mayor’s machine opponents, and black community groups including Operation PUSH went to court seeking an injunction to break the strike.

In both 1983 and 2019, Chicago Public Schools had been through a severe budget crisis. But 36 years ago it was ongoing. Today, CPS has been buoyed by significant new state funding.

Where that leaves the school district’s financial position is one major point of contention.

My sense is that Lightfoot and the teachers are on the same path, but have different perspectives — staring down large fiscal challenges or face-to-face with the needs of students — that have them moving at different speeds.

The union argues that new state funding “resolved CPS’ structural deficit,” and new provisions have addressed the district’s pension debt. CPS argues that while state funding has improved, the district is still underfunded and “in an overall negative cash position,” carrying $8.4 billion in long-term debt and forced to borrow to meet day-to-day obligations, with junk ratings for its bonds.

That improving financial position has allowed Lightfoot and CPS to offer a healthy compensation package and promises of increased staffing — but they maintain that ongoing uncertainties limit their options beyond that.

So money is one factor in the central dispute over class size and staffing of nurses and social workers. Another is power: while everyone agrees on general goals, CTU wants strict, enforceable provisions written into the contract, and Lightfoot and CPS want to keep management control over staffing decisions.

Last summer, Lightfoot announced a plan to double the number of nurses and social workers over the next five years. CTU is right that this is not carved in stone. But CPS maintains that shortages of candidates for these positions mean that strict staffing requirements could have unintended consequences. New staffing slots opening across the city could result in more vacancies in the highest-need schools, if existing support staff bid on more desirable locations and other positions go unfilled.

CTU President Jesse Sharkey has acknowledged the problem of shortages of nurses and social workers and CTU has offered to phase in new staffing requirements, but it still wants them spelled out in the contract.

On class size, CTU has proposed significant reductions and contractual enforcement — a goal that’s both laudable and very expensive — and CPS has offered to expand a program supplying teachers aides to overcrowded K-2 classrooms to cover the 3rd grade, and to provide some additional funding for other overcrowded classrooms. WBEZ found that 17% of K-3 classrooms were over the current guideline of 28 students, mainly in majority-white schools, and 7% of higher grades had more than 31 students, most often in Latino majority schools.

One model for a possible settlement could be Los Angeles, where teachers won class size reductions and staffing increases after a six-day strike in January. The school district there agreed to hire 300 nurses and to increase librarians and counselors in middle and high schools — comparable to Lightfoot’s plan, but guaranteed by the contract. Los Angeles’ class sizes will be reduced modestly, though future reductions are reported to depend on identifying new revenue sources, and by the contract’s third year class sizes will still be much higher — 35 to 42 in most intermediate grades and high schools — than Chicago’s guidelines, but protected by the contract.

One issue of great significance to teachers where agreement has been elusive is the provision of teacher preparation time. The board has offered to withdraw its proposal to increase the number of teacher prep periods directed by principals. But Lightfoot has rejected a union proposal to restore the 30-minute prep period at the beginning of the day — in terms that seemed to echo former Mayor Rahm Emanuel’s rhetoric around the longer school day.

There’s no evidence that lengthening the day is responsible for the district’s achievement gains. (The decline in the number of low-income students in CPS is certainly a factor.) There are certainly ways to rework school schedules to avoid reducing instructional time. Teachers say time before the first bell is invaluable for preparing the classroom, collaborating with colleagues, meeting parents, and catching up on paperwork in a district where requirements for documentation and data entry have grown significantly.

My sense is that Lightfoot and the teachers are on the same path, but have different perspectives — staring down large fiscal challenges or face-to-face with the needs of students — that have them moving at different speeds. There’s room for compromise, and a settlement is inevitable.

We can expect Lightfoot to move forward on other parts of her education agenda in coming months — in particular to address student-based budgeting, which has undermined schools with the most challenges — and to pass legislation establishing an elected school board.

But my guess is that like 1983 — and unlike 2012 — this strike won’t define her administration. Like 1983, there are lots of other challenges coming.