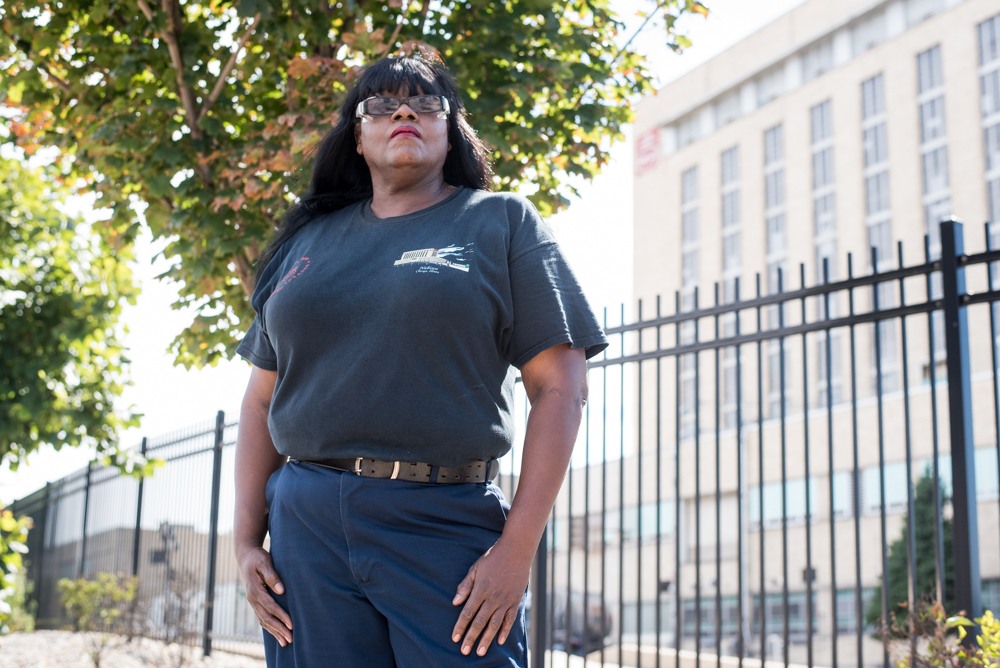 Sabrina Pope, 57, has worked at the Nabisco Bakery in Chicago for 35 years. Her mother also worked there.

When Nabisco’s parent company, Mondelez International, decided to cut positions at its facility on the Southwest Side of Chicago, it was the latest in an exodus of factory jobs  from the city in the last several decades.

Earlier this summer, Mondelez announced that it was eliminating 600 jobs from one of the world’s largest industrial bakeries, located at 73rd Street and Kedzie Avenue in the Chicago Lawn neighborhood. The jobs are headed south of the border, where the company plans to invest $130 million to upgrade a facility in Salinas, Mexico.

Sabrina Pope, whose family has worked at Nabisco for generations, is waiting to see who gets axed.

“I don’t know what’s going to happen to me,” said Pope, 57, a processor and baker who has worked at the plant for 35 years.  “I might have to find something else. Right now, we don’t have as many jobs like this available like it was back in the day. All of them are moving out of the state, or they’re moving to Mexico — everything is going global.”

In contrast to the impressive gains in black employment and wealth around the mid-20th century, the post-industrial period has been marked by a reversal of fortunes for black Chicagoans like Pope and her family. Opportunity has been limited by widening income inequality, a shift toward more low-wage jobs for workers without college degrees and high growth in jobs downtown in the high-tech and financial services sectors where diversity is lacking.

In 1976, economist Brian J.L. Berry connected rising economic marginalization of communities of color to shifts in the industrial landscape, observing that “Chicago is rapidly trending to two societies.”

One of the societies, Berry wrote, “the suburbs, the Loop and the Northern lakeshore — is part of a nationwide inter-metropolitan system of interaction, growth and change. The other— the inner city minority—is cut off, abandoned, localized.”

The migration of manufacturing jobs from the city to the suburbs and beyond deeply cut Chicago’s middle class. Industrial jobs once helped form the backbone of the city’s black middle class.  The city has continued to hemorrhage these jobs in recent years. Between 2001 and 2014, the number of people employed in Chicago manufacturing jobs decreased by nearly half, state data shows.

Michael Dawson, a leading scholar on politics and race, said, “It’s part of a devastating trend that’s been happening on the South Side of Chicago and in the black community throughout the United States for decades.”

Around the middle of the 20th century, as more and more blacks were allowed to work industrial and public sector jobs, the middle class began to see great progress, said Dawson, a professor at the University of Chicago. But he noted that workers in both sectors have seen their numbers shrink in the decades since. The shrinking numbers have also coincided with a decline in union power and worker protections, Dawson said.

“It’s been harder and harder for these families to maintain their middle-class status, let alone improve it as these jobs disappear,” he said. “And at the same time the jobs are disappearing, the social welfare net has shrunk considerably, as has the ability to get a public education at a reasonable price.”

Mondelez, based in Deerfield, Ill., reported more than $30 billion in profits last year. The company, behind popular snacks like Oreos and Nutter Butters, maintains it is still committed to the Chicago Lawn facility despite plans to cut as many as half of the employees there. Pope and most of the more than 1,200 plant workers are represented by the Bakery, Confectionery, Tobacco Workers and Grain Millers International Union. Like Pope, the majority of the members are black, according to union organizer Ronald Baker.

Like other blacks who moved to Chicago during the Great Migration, Pope’s parents sought better jobs and better pay. They found both in the industrial sector after they left Mississippi in the late 1940s — and so did the relatives who followed them.  In the decades since, the family tree branched north and nearly 20 of Pope’s relatives, cousins, aunts and siblings have worked at the Nabisco plant.

Her mother, Minnie Pope, has an 8th-grade education and worked more than three decades at the same plant before she retired in the early 1990s.

“It was a gateway to the middle class,” said Pope, a lifetime North Lawndale resident who earns $26 an hour working six days a week without a college degree. “The same thing it did for my mom, it did for me: I got a good job and I provided.”

The Nabisco job proved vital when Pope’s father, a forklift driver, died in 1969, leaving her mother in North Lawndale with eight boys and girls ages 6 to 16, including a then 9-year-old Pope.

The matriarch never had to rely on public aid and kept her kids fed, clothed and sheltered. Pope doesn’t believe they would have turned out like they did without her mom’s plant job. Today, most of her siblings have either college educations, jobs in city government or blue collar positions.

Pope’s youngest son, a 17-year-old high school junior, is eyeing a profession that could put him in a higher income bracket than most in the family — doctor.

“I don’t want to be in a situation where I can’t help financially for him to get to that point,” said Pope, who had hoped to retire from the plant in eight years.

Seniority could help Pope, she said, but given the severity of the layoffs, there’s a strong possibility that she and other senior employees could get pink slips.

She’s not the only one in the family at risk of losing a job.

At least five relatives work at the plant, including Pope’s 55-year-old sister who also has 35 years on the job, and a young step-niece.

“It could be terrible for us,” Pope said.