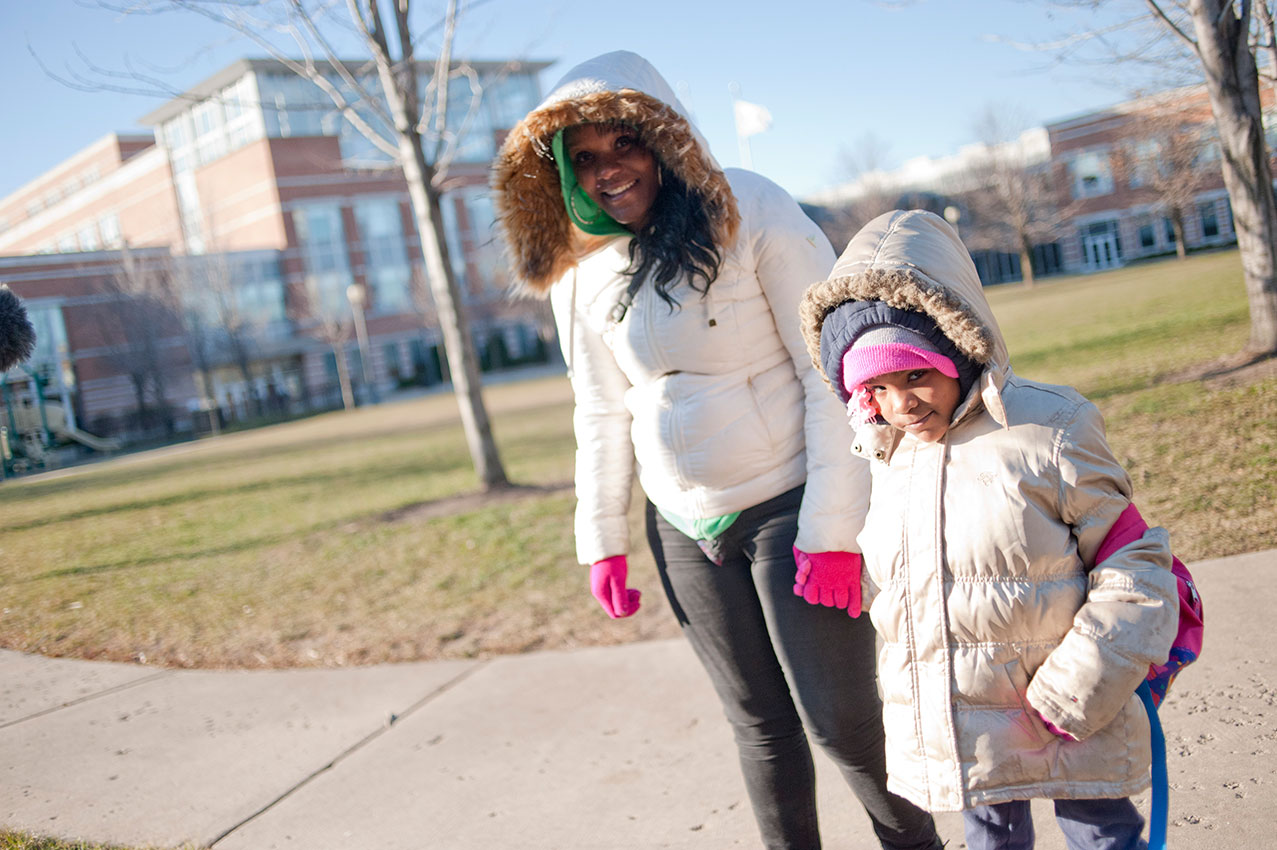 Terronda Harris walks about five blocks to get her four kids to National Teachers Academy in the South Loop. After the School Board voted to turn the elementary school into a high school, Harris' 5-year-old daughter, Quinntiana Spates will have to transfer to another school in 2019. 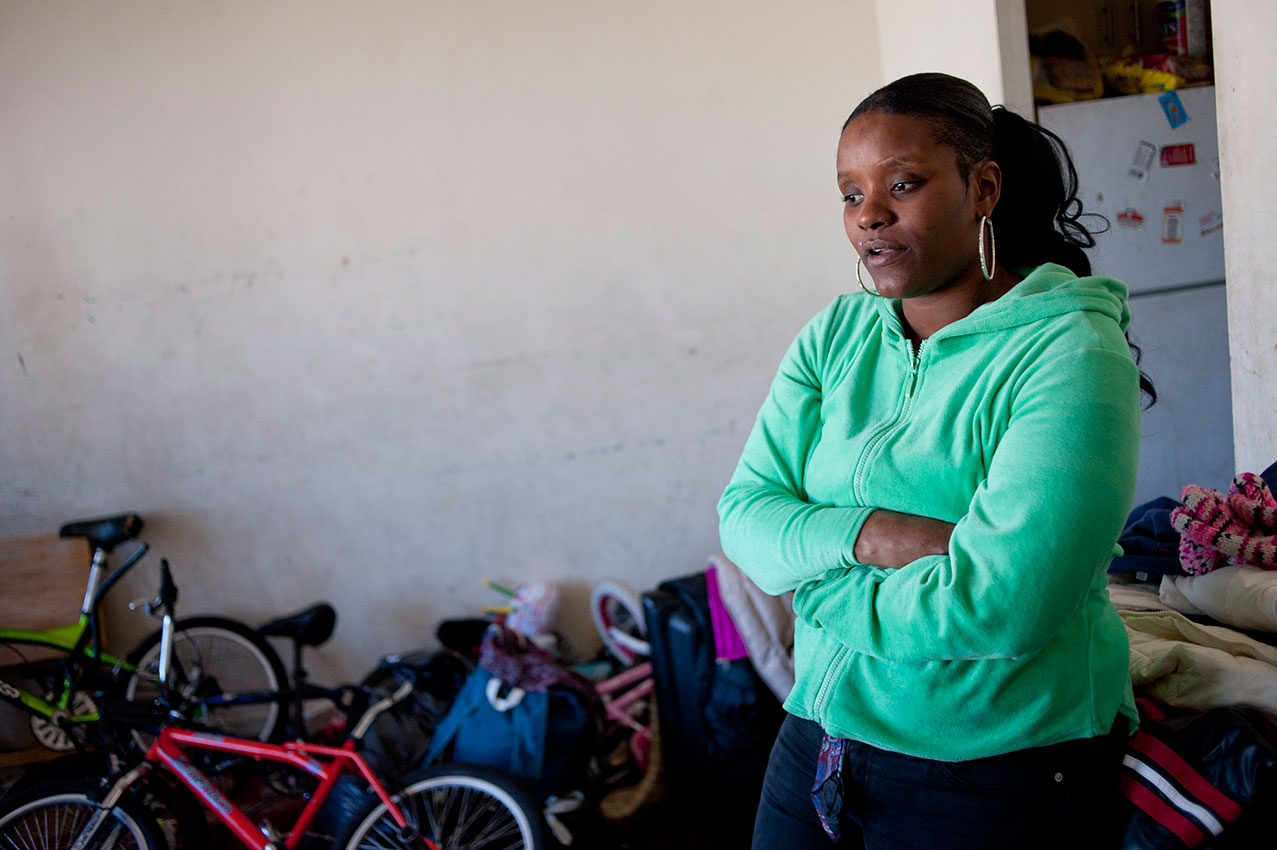 Terronda Harris lives with her four kids in a high rise on Michigan Avenue that offers affordable housing. Her kids have many friends in the building who also attend National Teachers Academy and they like to do their homework together. 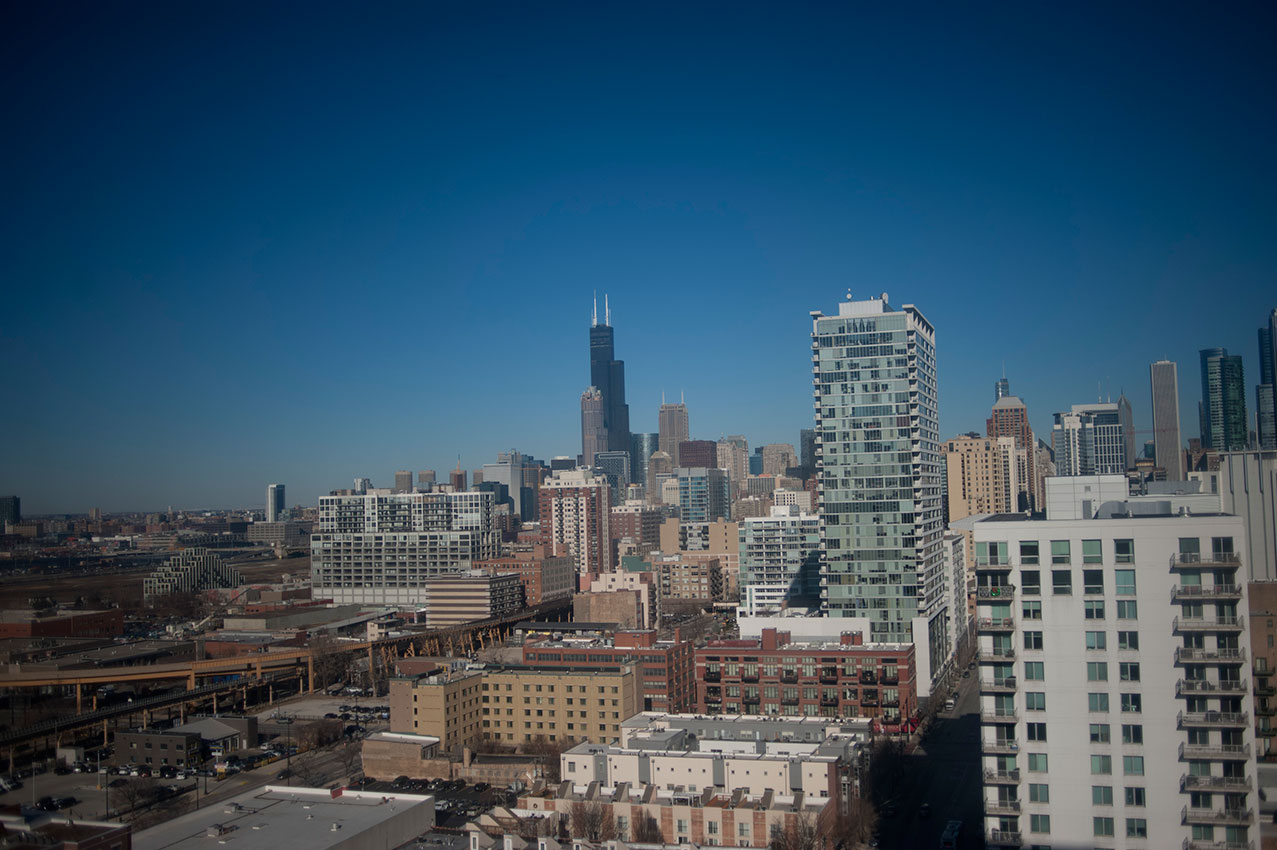 Terronda Harris has a sweeping view of the city and Navy Pier from her 22nd floor apartment. She likes living in the South Loop because it's safe and has activities for her children. 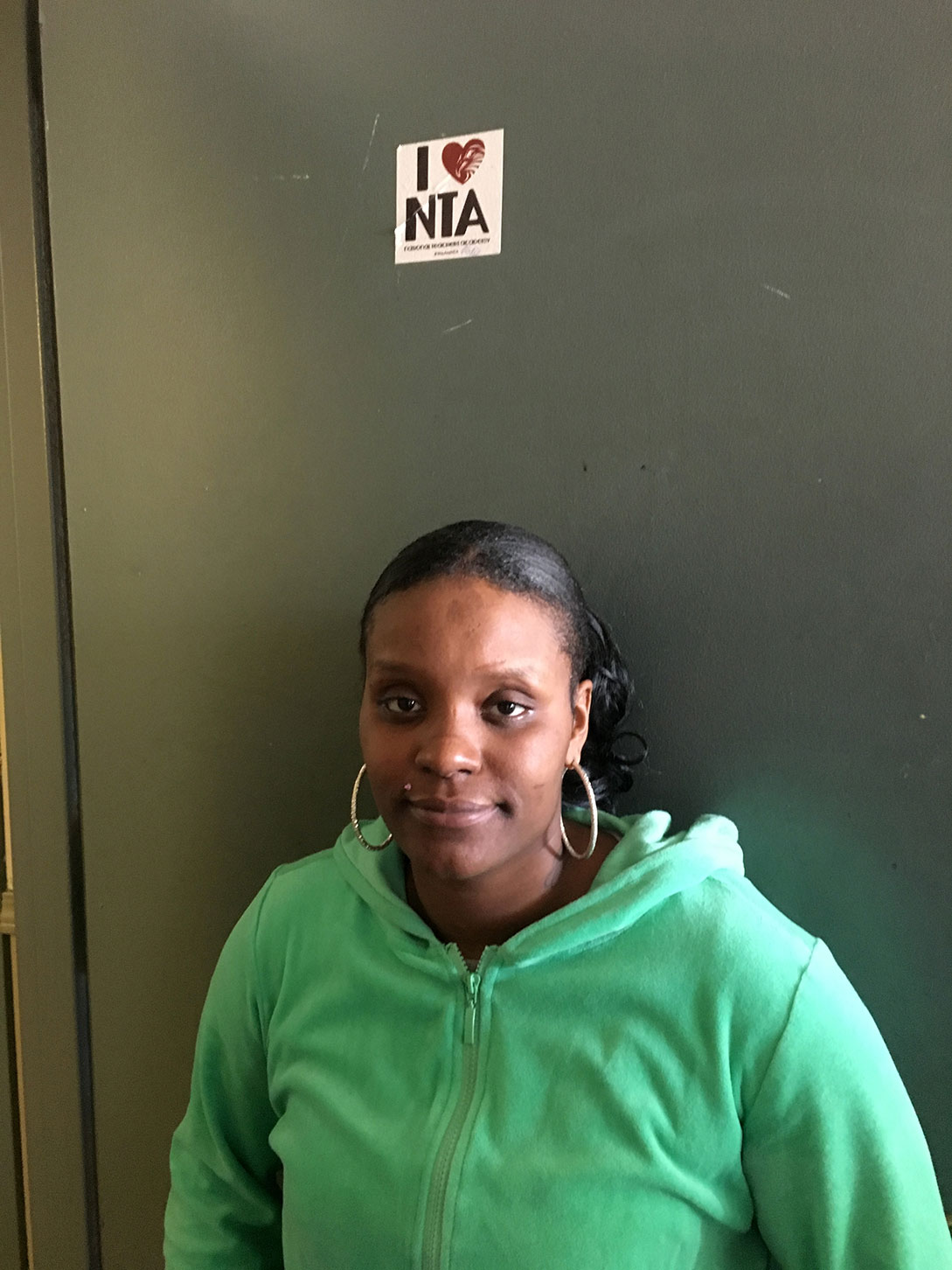 Terronda Harris placed an “I love NTA” sticker on the door to her family’s apartment — it’s the first thing her kids see when they come home.

Terronda Harris approached the microphone, no notes in hand. She wanted to speak from the heart.

It was late October, and the Chicago Public Schools Board of Education was assembled for its monthly meeting. Harris explained to them that she had four kids at National Teachers Academy, a top-rated, mostly African-American elementary school in the burgeoning South Loop. A few months earlier, CPS officials had released a controversial plan to turn it into a high school that would draw students from the surrounding area.

Harris, 27, had moved to the neighborhood three years ago from the West Side, into an apartment on the 22nd floor of a high rise on Michigan Avenue that offers affordable housing. In the summer, she can glimpse the fireworks as they burst over Navy Pier.

She liked that the South Loop was safe, and that her kids were learning how to swim and speak Spanish at their school. She showed her affection by placing an “I love NTA” sticker on the door to her apartment — the first thing her kids see when they come home.

Maintaining NTA as an elementary school was important to Harris for one big reason: Her kids had already been through a school closure.

In 2013, the board voted to close King Elementary, along with an unprecedented 49 others. Harris’ kids — like more than 11,000 other students, most of them low-income and African-American — had to switch schools. District officials later said they wouldn’t close any additional schools for five years. Now, they were threatening to erase the stability Harris had struggled to find in the wake of the last shutdowns.

“It’s so sad to see that every time we get a step up, they wanna push us back and then we struggling just to see our kids successful,” Harris told the board.

Yesterday, four months after Harris spoke, the board voted to go forward with closing NTA. The plan has drawn criticism from hundreds of students, parents and community members who say the district shouldn’t disrupt a top-rated, well-attended school — a move that wouldn’t have been permitted under past policies.

National Teachers Academy Local School Council chair Elisabeth Greer stands with two NTA students, Marieyea Crawford and Devon Collins, at a protest outside Chicago Public Schools’ headquarters on Wednesday, Feb. 28, 2018. Greer pointed to 1,110 emails and letters that CPS received in support of maintaining NTA as an elementary school and 68 in favor of making it a high school.

Several NTA students, some of whom live in affordable or public housing, told the board they felt they had to give up their school because wealthier families in the area wanted to avoid sending their children to Phillips, the lower-rated neighborhood high school.

Katherine Gladson, an attorney for LAF (formerly known as the Legal Assistance Foundation of Metropolitan Chicago), expressed concern that the district was treating the situation as a change of school boundaries instead of a phase-out. She described it as a “clear and alarming” violation of state law.

Starting in the fall of 2019, NTA students in third grade and under, like Harris’ youngest daughter, will be transferred to South Loop Elementary. Older students, like Harris’ older daughter and two sons, will be allowed to stay and graduate from NTA, or transfer to South Loop.

That same year, CPS will start sending ninth-graders to NTA until it eventually becomes a high school for Chinatown, Bridgeport, the South Loop and parts of Bronzeville. Supporters say the plan will create one of the city’s most diverse high schools.

The board also voted to phase out three Englewood high schools — Hope, Harper and TEAM Englewood — over the next three years, and to close Robeson at the end of this school year while the district builds a new $85 million high school that will open in the fall of 2019. All four schools have struggled with declining enrollment and budget cuts, as new schools opened around them or students opted to attend high schools outside the neighborhood.

New CPS CEO Janice Jackson said she was proud that the district modified its plan to allow for a phase-out so students could remain at their schools if they wanted to.

“Some of us have seen eye-to-eye on these plans. Some of us have not. But we have listened to all of you,” she said. “I’ve been in CPS for a long time and have not seen the level of flexibility that’s present in the school action plans we’re presenting today.”

But some students said it wasn’t enough to keep the schools open for a few more years if CPS didn’t also invest in them.

“If you really believed in quality education and equity… you would give us the things that we need, such as cosmetology classes, AP classes, honors classes. Things that we don’t have,” said Hope sophomore Miracle Boyd. “Our Englewood kids, we are hurting. No one acts like they care about us. How can I be successful if I don’t have the things that I need?”

Critics accuse CPS of constantly changing its rationale for closing schools — from poor academics to low enrollment to community support. But each time, they point out, the outcome is the same: Mostly poor black students are impacted. Some protesters called on the board to suspend its vote in light of reporting by the Sun-Times and WBEZ that showed some of the key supporters of the Englewood plan didn’t live in the neighborhood or had done business with CPS.

For Harris, it’s just another repeat of five years ago. After the district closed King, her kids transferred to the receiving school, Jensen, but it was a much farther walk from their home. So she pulled them out and enrolled them in nearby Dett, which had merged with a closed school. Her kids fended off bullies and grieved for the friends they’d lost.

“It was just like going through hell,” Harris said.

Now that her kids are comfortable at NTA, it pains her to know she’ll likely send them all to South Loop so they can be together. Right now, all the kids in her building are assigned to NTA, so her children can do homework with their friends. She’s not sure how she’ll break the news to her kindergartener.

Maybe, she says, she’ll tell her daughter something Harris is not sure is true: That all her daughter’s friends will transfer with her.

Mayor Rahm Emanuel's decision to close 50 public schools in 2013 ignited a firestorm among parents, educators and community groups. Now, four years later, most of the schools are still empty. This series explores the aftermath of the mass closures on the South and West sides of Chicago.