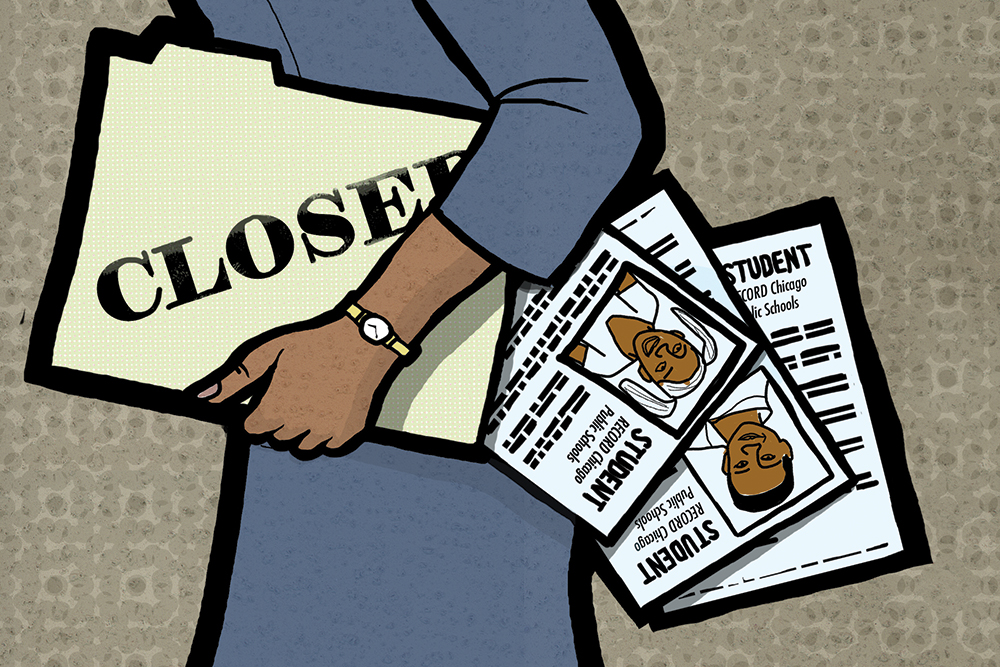 Information from a Freedom of Information Act request found far more students remained unaccounted for after the 2013 closings than CPS first claimed.

Last summer, CEO Barbara Byrd-Bennett penned an open letter in which she boasted that the district had determined where all but seven children affected by 2013’s mass closings had landed in school. More than 11,000 had been displaced, so it seemed a major accomplishment.

The information had been verified through the Illinois State Board of Education, according to the letter, which also repeated “Seven” to underscore the point.

Byrd-Bennett’s letter also criticized outsiders who had speculated that children would fall through the cracks after the closings, with no one knowing where they landed in school—something that had happened in the past. “The horror stories about hundreds of children “lost” to the streets during this transition were simply misguided efforts to distract us from our mission to give every child in every neighborhood the great education they deserve,” she wrote in the letter that was published in the Chicago Sun-Times.

But Byrd-Bennett’s letter was not accurate. After five-and-a-half months of wrangling, Catalyst Chicago finally received information from CPS that shows officials were not certain about the whereabouts of at least 434 students at the time the letter was published. (Catalyst received the documents only after a lawyer threatened legal action if the district did not comply with a Freedom of Information Act request.)

These 434 students were not located in a search done by Illinois State Board of Education officials.

Officials now admit that 154 children of those children were either coded as “unable to locate” or “did not arrive,” or had absolutely no code attached to their record. After being out of school for a year or enrolled elsewhere, 39 of the 154 students showed up this school year, according to CPS.

Another 279 children were coded as transfers–to home school, a private school or an out-of-state school–though CPS could not verify whether these students were in fact enrolled in a new school. One student died.

While it might be unrealistic to expect CPS to track 11,000-plus students, critics note that Mayor Rahm Emanuel and district leaders devoted an unprecedented amount of resources to the task. They hired a former Marine colonel to oversee the process with a staff of 40 and hired retired principals to go to each closing school in part to make sure that students did not vanish in the transition.

After first standing by the claims in the letter, CPS spokesman Bill McCaffrey acknowledged that the statement asserting that only seven students were unaccounted for was a mistake.  McCaffrey says that an internal data analysis this summer found only seven students with blank records and did not take into account other codes that indicated officials did not know where the students were.

“Chicago Public Schools takes the accuracy of its statements and the integrity of its data very seriously,” he wrote in an e-mail.

Two former CPS data strategists told Catalyst that the district would not have any way to systemically track these students. One of them notes that the loss of these students probably is the result of a combination of poor data entry, lax bookkeeping and little accountability when a student transfers.

“All this is to say, I’m afraid we can only speculate about these missing students and likely will never know where they ended up,” said one of the employees.

King Elementary in East Garfield Park and Goodlow Elementary in West Englewood had the largest percentage of missing students. Parents at these schools fought vehemently against the closings and were very negative about the designated welcoming schools.

“The parents who were active in the fight placed their children in decent schools,” says community activist Carol Johnson. “A lot of the other children got lost in the shuffle.”

Melanie Goldman, whose granddaughter went to Goodlow, agrees that many parents found other options for their children. But some parents didn’t get their children into the schools they applied to, and didn’t feel safe sending their children to the designated welcoming school, which was Earle.

Initially, CPS called some parents to find out where the children were, especially because so few showed up at Earle, Goldman says.

“They [parents] know where they are, but they are not saying. They are still angry,” Goldman says. “I guess they are being low-key.”

West Side activist Dwayne Truss says a member of the district’s Office of Family and Community Engagement came to Austin’s Community Action Council meetings and explained to the group that he had been charged with finding students from closed schools whose parents hadn’t requested transcripts for a new school.

“This is how some kids fall through the cracks,” Truss says. “Students being lost are one of the unintended consequences.”

Lettrice Jamison’s children might be among the missing. After Emmet in Austin closed, she moved to Gary, Indiana for a host of reasons, including the fact that she was upset at the closing. Jamison says she didn’t tell anyone in CPS that she and her children were leaving the district.

With no records in hand, Jamison says she just walked into the Gary, Indiana school down the block from her house and told them she wanted to enroll her children. She gave them information about where her children went to school previously, but has no idea if they reached out to CPS for her children’s transcripts.

“Gary schools are messed up like Chicago schools,” she says. Jamison says she thinks her children’s new school is worse than Emmet.

Members of the Chicago Educational Facilities Task Force say the situation is proof that the district was not prepared to close so many schools at once. The state legislative task force includes a number of activists who have wrangled with CPS through the years. At the group’s meeting in September, CPS officials failed to show up and the district has since refused to provide any other documentation, says Jacqueline Leavy, former executive director of the Neighborhood Capital Budget Group who helped the task force in its work.

CPS was supposed to come up with individual transition plans for each school, but the first drafts were boiler-plate and made without community input, says task force member Valencia Rias-Winstead. Once the schools closed, more detailed plans were developed. Only by then, few parents at the schools knew about them.

McCaffrey points out that, according to a recently released Consortium on Chicago School Research report, the number of students who left CPS after the 2013 closings is similar to the number who left those same schools in previous years. In other words, the closings did not precipitate a mass exodus.

The Consortium report also notes that twice as many students in closed schools were too old for their grade, making them far more likely to drop out. CPS recently acknowledged that some 900 6th, 7th and 8th graders are not in school, and the district is seeking operators to launch alternative schools for middle-grades students.

The issue of missing children came to the forefront when CPS released a detailed report on enrollment last year, prompting Chicago Teachers Union President Karen Lewis to publicly scold the board in March. At the time, Lewis said the numbers showed some 800 children were unaccounted for.

A CPS spokesman promised the district would release the results of its work with the Illinois State Board of Education to locate the students. Catalyst began regularly requesting the information but did not receive it. In July, the Sun-Times published the letter from Barbara Byrd-Bennett.

Catalyst submitted a FOIA request on Aug. 8, with no results. On the heels of a Better Government Association FOIA lawsuit against the district, Catalyst reached out to BGA attorney Matt Topic of Loevy & Loevy.

Topic threatened legal action if Catalyst did not receive a response by Jan. 17. At 5:47 p.m. on Jan. 17, a heavily redacted report arrived via e-mail.