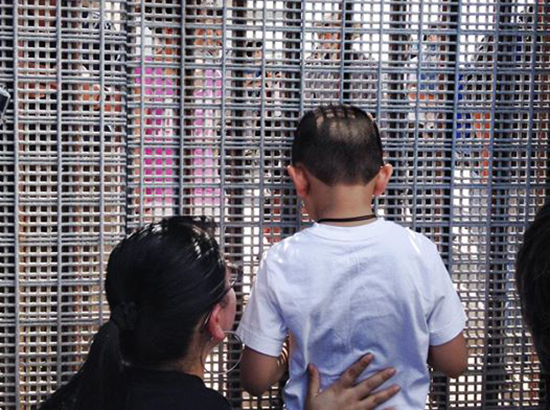 When Maria Reveles heard young undocumented immigrants in Mexico were organizing to cross the U.S. border in an act of civil disobedience, she called contacts in Chicago and asked them to bring her son back.

Her son, 22-year-old Luis Manuel, was brought to Chicago illegally when he was 5 years old. He eventually attended Curie Metropolitan High School and graduated from Bolingbrook High School. But without a Social Security card, he was unable to apply for grants and scholarships that would have made college affordable. So he moved back to Mexico City in 2011 to further his education.

But things didn’t turn out the way he hoped. He couldn’t get into the university he wanted. He was living alone. He was harassed and robbed.

“It hurts to think about how much he’s suffered living there by himself,” the single mother said. “We just want to bring him home.”

Reveles was one of 30 young immigrant protesters who crossed the San Diego-Tijuana border on Monday as part of the national Bring Them Home campaign. A total of nearly 150 undocumented immigrants are expected to cross the border this week. Two other former Chicagoans — Cecilia Garcia, 37, and Miguel Angel Cedillo, 27 — are among them, said Lulú Martinez, an immigration reform activist who is helping organize the crossing.

The National Immigrant Youth Alliance and former Chicago immigration activist Elvira Arellano are behind the action, which is a way to show frustration over the stalled immigration reform bill in Congress and the record number of deportations. Since President Barack Obama took office in 2008, almost 2 million people have been deported — more than under any other president.

Many of the protesters arrived in the United States as children, but either left the country or were deported. Often called “Dreamers,” they crossed the border wearing caps and gowns, signifying their desire to finish their education in the U.S., which would have been possible under the failed piece of federal legislation known as the Dream Act.

It is unclear if Reveles and the others are going to be held inside a detention center, Martinez said. Martinez, a University of Illinois, Chicago student, crossed the border last year and spent 15 days in federal detention as part of the Dream 9.

This is the third crossing organized by the National Immigrant Youth Alliance, including last year’s Dream 9 and Dream 34 actions. Unlike other organizations pushing for immigration reform, members of the NIYA have opted for more militant forms of protests, including chaining themselves to deportation buses, stopping traffic in various cities and now crossing the border without proper documentation.