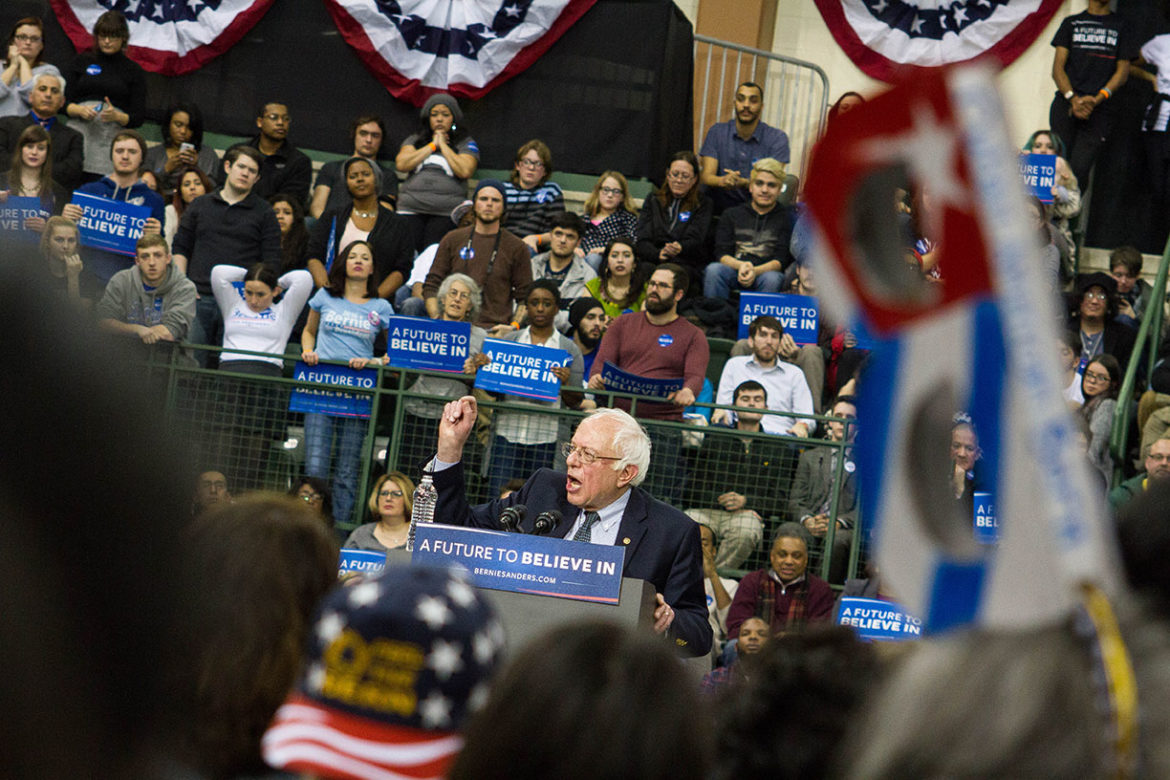 Bernie Sanders speaks to a packed arena at Chicago State University while campaigning for president on Feb. 26, 2016.

Halfway through his second term, Mayor Rahm Emanuel will get a report card from progressives Saturday at a “State of the City” event launching Our Revolution Chicago, part of a national organization working to advance the agenda of Bernie Sanders’s remarkable 2016 presidential campaign.

Local activists including veteran organizer Katelyn Johnson, Tom Tresser of the TIF Illumination Project, and Tania Unzeuta of Mijente will give reports on Emanuel’s record on education, crime and policing, immigration, jobs and economic development, and taxes and city finances. The audience will decide what grade he gets in each area.

With our federal, state and city governments dominated by unpopular politicians with vast campaign war chests – and an inability to address our most basic issues, like poorly funded education, lack of jobs, and violence – we could use an infusion of the energy harnessed by Sanders last year, with his focus on income inequality and campaign finance reform and his call for “political revolution.”

Instead of another fundraising operation, Our Revolution state coordinator Clem Balanoff wants to build a network of ward-based precinct organizations, something like the machine precinct captains he remembers from growing up on the Southeast Side.

“They used to walk around the neighborhood on summer nights, when people were sitting on the porch or watering the grass, and talk to people,” he said. “Something like that – except instead of being based on patronage and favors, it will be based on philosophy.”

Balanoff envisions activism that builds knowledge among potential voters and momentum toward elections. “We want people to work where they live, so they can go out when they have a free hour on a Saturday morning. We’ll get people the training they need,” he said. “They’ll be knocking on doors, meeting people in the neighborhood, and talking about two or three issues. It might be, ‘We’re here to get people to support [State Rep.] Will Guzzardi’s bill for free college tuition [at public institutions], or [State Sen.] Daniel Biss’s bill for campaign finance reform.’ And when the election comes around they’ll say, ‘Remember we talked about college tuition and campaign reform? We have a candidate that agrees with us on that.’ ”

“So you’ll have people, and you won’t need as much money [to run a campaign] because you’ll have a real operation,” Balanoff concluded. “That’s how you win, and that’s our problem – we need to win.”

And out of that effort, he said, leaders will emerge – including potential candidates to challenge Emanuel’s allies in the City Council. Ongoing organization will also provide a means to hold officials accountable after elections.

Our Revolution is part of “a fight within the Democratic Party,” Balanoff said. The party establishment wants to “bring us in. But they don’t understand – it’s not about ‘bringing us in,’ it’s about changing so we can be supportive.”

What needs to change? “Philosophically, the party has to be more interested in working men and women than in their corporate donors,” he said.

That might describe the dynamic in the last mayoral election, or the next one, with Emanuel representing the establishment. What about the race for governor, where a number of Democrats are trying to stake out progressive positions?

Our Revolution may make an endorsement in that contest, Balanoff said. “We’re working on a mechanism to do that.”

Like most Americans, most rank-and-file progressives fixate on the presidential election every four years. Maybe Our Revolution can help change that dynamic.

And maybe it can replace our understandable cynicism with a feeling of hope and a sense of our potential power. That in itself would be something of a revolution.