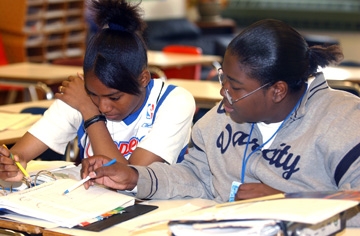 The program, called AVID, for Advancement Via Individual Determination, focuses on students who have average grades and test scores and need more skills and savvy to prepare for college.

“AVID is for smart students who need to learn how to do school better,” says Venessa Woods, AVID coordinator at Evanston Township High School, which has had the program for six years. “Imagine students coming into high school in mid-level courses and graduating in honors and AP courses, with accolades to boot. We are doing it.”

The drive to bring AVID to Chicago began in 2002, when student members of the Southwest Youth Collaborative found out about AVID from young people in San Jose, Calif., who were lobbying to save it from budget cuts. At the time, the Collaborative was searching for ways to reduce tracking in neighborhood high schools and raise the achievement of average students.

Just before the 2002-2003 school year began, the Collaborative asked the School Board to create 10 pilot schools; CPS agreed to create eight. Three of them—Bogan, Gage Park and Kelly—are on the Southwest Side.

“A lot of times we’ll take an idea to the board and they’ll say, ‘Oh, great idea,’ but they’ll end up doing about one-quarter of what we asked for,” Collaborative organizer Jeremy Lahoud says. “We were happy they took the idea and ran with it.”

This September, with the help of a $168,000 grant from the Dell Family Foundation, 20 schools will have AVID programs. The grant will pay for materials and training from the California-based AVID Center International, which runs the program.

Launched in 1980 by Mary Catherine Swanson, former chair of the English department at Clairemont High in San Diego, AVID was designed as a way to level the academic playing field for students of color, who were entering the school through court-ordered desegregation.

AVID’s success comes largely by helping students help themselves. The core of the program is an elective course that functions as a peer support group and teaches study skills as well as how to work with teachers and peers to succeed.

“We have to teach [students], ‘No, you’re not a victim.’ There is a way they can take control of what’s happening in the school system, but they don’t know how,” Swanson explains. “When students sit in the front of classes and they take notes and they ask questions, teachers’ perceptions change. They won’t really believe kids can do things differently until they see it, and in AVID, they see it.”

Schools are required to recruit a team of teachers to work with the AVID coordinator and encourage kids to keep up their grades and take a more demanding academic load. Tutoring is provided by college students, some of them former AVID participants, who have been trained in Socratic questioning so they can help students develop their own understanding of the material. Students learn the Cornell method of note-taking, which entails going back after class to jot down key ideas and questions alongside in-class notes. And students are required to take notes in every course, critiquing each others’ work during AVID class.

Swanson says schools virtually never teach good note-taking skills, critical to success in college. “Teachers assume students know how to do it, and they don’t.”

In Chicago, AVID’s first year “has been a struggle,” acknowledges Ron Raglin, special assistant to CEO Arne Duncan. Raglin, a King High graduate, was recruited by Duncan to come back to Chicago and give up his job as an AVID coordinator in California. Raglin reports initial signs of success; for instance, 24 percent of AVID students took an honors course this year, compared to only 6 percent of their peers not in AVID.

First-year struggles are normal, says Chuck Powell, director for AVID’s central division, which includes CPS. “I get worried if someone doesn’t have challenges. Generally, that tells me they’re serving kids who were going to college anyway.”

One common problem was recruiting. Crane High on the West Side postponed starting AVID until the second semester, Raglin reports, since the school was undergoing renovations in the fall.

Orr High in West Humboldt Park had to recruit “under the gun” at the last minute, says coordinator Angela Collins. Time constraints forced her to skip the parent interviews AVID encourages to assess applicants’ motivation and home support. But Collins says she won’t go another year without them because “you need to have some support from the home or it just doesn’t work.”

Bogan High solved the recruiting problem by choosing AVID students from Step Up to High School, a voluntary summer program for underperforming 9th-graders. “AVID caters to students who may not have that skill level just yet,” but really want to work, says Bogan’s AVID coordinator, Theodosia Harris. “That’s what Step Up kids are.” Showing up for voluntary summer school proved their drive, she points out. “Who wants to go to summer school if you don’t have to?”

Woods notes that start-up recruiting can be difficult at some schools because of students’ mistaken perceptions. At Evanston, “no one wanted to be part of the new program that targeted students of color who were not in honors courses,” she says. “I clearly remember one student stating that she was in AVID because she was black, poor and stupid. That was my first task, to debunk the myth that programs for students of color had to be remediation-based.”

Finding tutors also proved tricky. Raglin says college students sometimes did not find it worth their time to travel to high schools far from campus to tutor for one class period, which was all that schools needed because of the small size of their programs. Next year, he hopes to solve the problem by requiring AVID schools to recruit at least 100 students each, enough to provide multiple class periods for tutors.

Not a quick fix

Despite the roadblocks, students praise the program. For instance, Bogan High freshman Gerald Evans says learning to ask in-depth questions in peer study sessions helped him pull his World Studies grade from a C to an A.

Gage Park High sophomore William Comfort says AVID-sponsored college trips taught him how to plan better for higher education. Before AVID, he says, “I’d never really been [to a college] or knew what it was like. Now I’m thinking about going to a four-year college and making it through.” He also raised his grades in biology and geometry from D’s to B’s.

Orr’s Collins says some of her students initially rebelled against higher standards because “they’re not used to people kicking them in the butt.” Despite her best efforts, some students still are not taking the required notes in their courses.

One student, Earnest Smith, says Collins at one point gave him an ultimatum—shape up or ship out. Now he has the only A in the AVID class, and made the honor roll last quarter.

“I wanted to be in the class,” says Earnest, who knows he needs AVID’s extra help to make it to college. “I knew if I made a B in it before that I could do it again. Then I motivated myself [to do even more].”

Swanson warns that typically, it will take three years for students to earn top grades in higher-level courses and improve their college prospects. During that time, they may be working harder, but “they don’t value the fact that the courses are tougher,” she says. “That’s really hard for kids. AVID is no quick fix.”