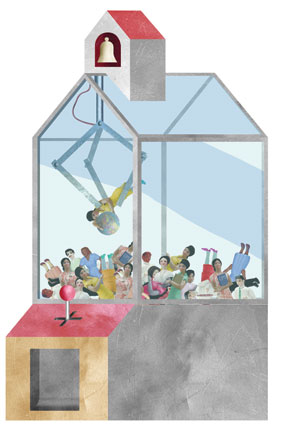 More than 80 percent of the teachers at Jones College Prep—one of Chicago’s highest-performing schools—have 10 years or more experience. With so many teachers at the top end of the union pay scale, Jones’ faculty payroll is higher than average for a district high school.

Just the opposite is true at Fenger Achievement Academy, a catch-up high school program for low-scoring students who are too old to be retained in 8th grade. Only 20 percent of its teachers have 10 or more years of experience.

However, since teacher salaries are paid centrally, Jones doesn’t feel the pinch of higher salaries and Fenger has no surplus. And whether they should is a matter that sparks considerable debate.

Some think that making schools pick up the full tab for teachers salaries would level the financial playing field and may even raise teacher credentials or experience at hard-to-staff schools.

Charging schools actual teacher salaries “is more equitable, and equity has to be the first consideration,” says Diana Lauber of Cross City Campaign for Urban School Reform, a group that advocates for local control of schools.

Others argue that this strategy is too politically volatile, as it can create seismic monetary shifts, and may create incentives for principals to base teacher hiring decisions on salary rather than quality. There are other ways to better distribute highly qualified teachers, they say, such as linking teacher pay to performance.

Both these views weigh heavily in deliberations at Chicago Public Schools over how to structure the district’s new budgeting system, to be rolled out over the next five years, to ensure that it is more equitable and that funding is more closely tied to the students a school serves. Such a system is already in place at charter schools; and this fall, three non-charters that opened under Renaissance 2010 were also given lump-sum budgets and have to pay full price for the teachers they hire. (See Catalyst November 2005)

But all of these schools were brand new and built staff from the ground floor. Trickier will be converting existing schools where veteran principals already have staff in place and fear that they will no longer be able to afford to keep teachers at the top of the pay scale.

Principal Katherine Volk of Pershing East says such a system would put pressure on a school to justify hiring a veteran teacher. “You’d really have to ask the hiring committee, ‘Is this worth the extra expense?'” she explains. “We’re talking of a big sum here, around $12,000.”

A more palatable version of lump-sum or per-pupil budgeting for many would involve holding schools harmless for teacher pay, much like the current system does. Nearly every school district across the country that uses lump-sum budgeting has opted for this route.

Teachers salaries are the lion’s share of a school’s budget, and forcing CPS schools to pick up the cost would have significant consequences, according to a Catalyst Chicago analysis of this year’s budget.

‘Not a new challenge’

Principal Don Fraynd says he’s not worried about the new budgeting system having a negative impact on Jones, whichever way the district goes. Private schools, where he spent time as a teacher, juggle teacher pay and other educational expenses all the time and find a way to hire older, higher-paid staff. “This is not a new challenge,” he says.

He points out that increased spending flexibility under lump-sum budgeting could free up money elsewhere. “We could do a cost-benefit analysis and cut something else to hire a teacher who really stood out in the hiring process,” he says.

Charter school operators say they have been doing this balancing act for years. According to Chris Kelly, dean of operations at North Lawndale Charter, the school always hires the best person for the job, regardless of salary.

When schools have to pay for their own teachers, dollars are spread more evenly across schools and it creates “fiscal equity,” says budgeting expert Marguerite Roza, a senior researcher at the Center on Reinventing Public Education. But the real problem, she says, is skewed distribution of teacher quality.

“If we want to make a more equitable system then we should have equal talent [across schools],” says Roza. Charging schools for actual teacher salaries “would resolve the fiscal component, but we don’t know to what extent it would resolve the distribution of talent.”

So far, Oakland, Calif., is the only school district that has tried this method of lump-sum budgeting to force the redistribution of teacher talent. Teachers union officials there argue the policy gives principals incentives to hire cheaper teachers.

Volk speculates that lump-sum budgeting with actual salaries creates disincentives for teachers to climb the existing career ladder, which is based on extra pay for advanced degrees and earning credits in professional development. “Teachers who make higher salaries won’t be as attractive,” Volk says. “If they go higher, their job may be in jeopardy.”

However, some CPS principals argue that teacher quality will not suffer if schools are given such a budgetary tradeoff. “[Principals] don’t look at veteran teachers and new teachers,” says Jose Barrera, principal of Columbia Explorers. “They look at right teachers.” Catalyst’s analysis found that teachers at Columbia Explorers earned approximately $5,000 less a year, on average, than the district average for elementary schools. It stands to gain more funds for teachers under a per-pupil system.

The path of least resistance—pairing lump-sum budgeting with charging schools a fixed price for teachers—may be the safest route for the district. Consultant Karen Hawley Miles, who has been hired to help Chicago develop a more equitable budgeting system, cautions that rolling out a new system that charges schools for teachers could be unfair when it’s done in existing schools.

The district ought to move in that direction in the long run, Miles says, but such a move should be paired with efforts to link compensation more closely to teacher quality.

“We need to equalize the mix of teacher quality but that requires more flexibility and better connections between teacher salaries and actual quality, maybe changes to the compensation system in the long-term,” Miles says.

CPS is considering both options, and is examining how each method would affect schools. J R Tomkinson, a project manager in the CPS administrative office, admits that they had “more flexibility” to use the more radical budget approach at three non-charter Renaissance schools because they are new.

“But when we roll out to the entire district, there are a number of schools that have teachers that are more experienced,” he explains. “So [converting them] will be a significant challenge.”

Fraynd concedes that, given a choice, he would opt out. From a school perspective, “we want the most money possible. If there is a choice on this, I’m not going to switch because I know what a sweet deal we’re getting. But as a CPS principal, if I put on my hat as a company man, I would say this is a good thing.”