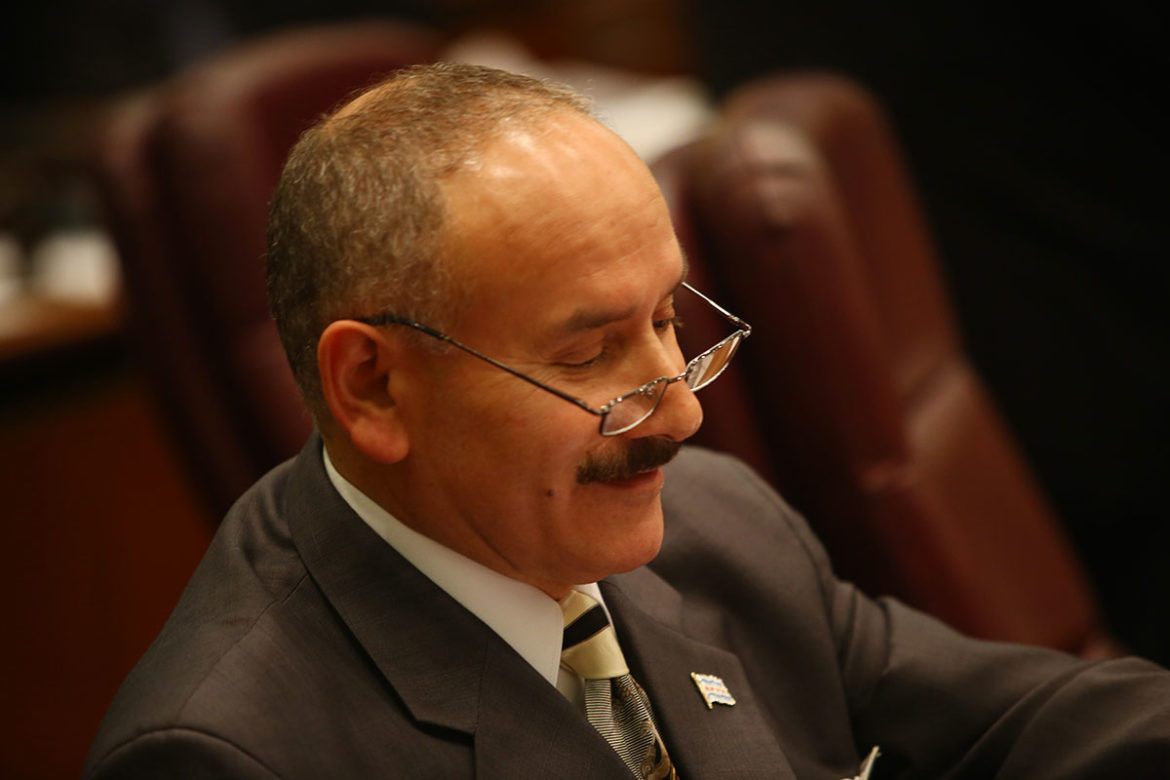 Ald. Ariel Reboyras introduced a pair of ordinances proposing an appointed, advisory police oversight board on the same day the Grassroots Alliance for Police Accountability put forth a plan for an elected civilian board that could set policy for the police department.

We’re at another turning point for police reform in Chicago, and it looks like Mayor Rahm Emanuel is sticking to his game plan of maintaining as much control over the police accountability system as possible.

That’s unfortunate. Efforts to improve policing in Chicago communities will be more effective to the extent that power is shared with city residents.

This time Emanuel is, so far, maintaining plausible deniability. Ald. Ariel Reboyras, who was selected by the mayor to chair the City Council’s public safety commission, introduced two ordinances that “neuter” the proposal for a Civilian Police Commission advanced by the Grassroots Alliance for Police Accountability after nearly two years of community input.

GAPA’s proposed Civilian Police Commission – which would be selected by members of district councils chosen in elections – has power.  It would set police department policy and select the administrator of the Civilian Office of Police Accountability, which currently investigates most police misconduct. And it could fire the police superintendent for cause under narrowly prescribed circumstances. The commissions proposed by Reboyras would be purely advisory.

Reboyras denied that his ordinances were developed at the behest of the mayor, going so far as to say, “I don’t think he should have input on it.”

That’s quite an assertion.  Unless something changes – and with mayoral and aldermanic elections coming up in a year, it could – the usual process is for competing aldermanic proposals to be debated, with the mayor’s office ultimately deciding (with the cooperation of committee chairs) what the City Council will be allowed to vote on.

Reboyras’s ordinances are largely cut-and-paste jobs from ordinances establishing police commissions in Seattle and Los Angeles – down to minor details: both Seattle’s ordinance and one Reboyras proposal contain these words:

GAPA held two years of community meetings and studied models from across the country.  Another coalition, spearheaded by the Chicago Alliance Against Racist and Political Repression, supports an elected Civilian Police Accountability Council and has been organizing support for that proposal for even longer.

In response, some city staffers found a couple of bills online and just plugged in new names. It probably took a couple of hours. It’s not surprising GAPA’s Mecole Jordan called Reboyras’s move “a slap in the face.” Mecole Jordan, a member of the Grassroots Alliance for Police Accountability, speaks about the proposed Civilian Police Commission at a City Hall press conference attended by several aldermen and Police Board President Lori Lightfoot (right) on March 13, 2018.

Reboyras said he was taking Los Angeles as a model, just as GAPA did. But Reboyras’s model was the purely advisory civilian board for the Los Angeles County Sheriff’s Department. GAPA took many provisions from the much stronger Los Angeles Board of Police Commissioners, which serves as the governing body – sometimes described as the “board of directors” – for the Los Angeles Police Department.

That includes the power to set department policy (a power now held but not generally exercised by the Chicago Police Board) and to fire the commissioner.  As in Los Angeles, the GAPA proposal would allow the City Council to overturn the firing by a two-thirds vote.

That’s a provision Reboyras has singled out as unacceptable. But according to GAPA, the LA commission’s ability to hold the police chief accountable is an important element in the “dramatic transformation” of the LAPD since the 1992 Rodney King riots.

No doubt policing in LA has a ways to go, but a 2009 study found 83 percent of residents approved of the job LAPD was doing.  That compares to a 2016 Chicago Tribune poll which found that just 20 percent of Chicagoans think CPD treats all residents fairly, including just 6 percent of African Americans. GAPA also notes LAPD’s homicide clearance rate of 73.4 percent, compared to 17.5 percent for CPD.

(One factor in LA is the shift from a largely white police force to one that more closely reflects the city’s demographics. That’s an area in which CPD continues to fall short.)

One salient issue here is the power to appoint the chief administrator of COPA. In order to ensure COPA’s independence, the April 2016 report by the mayor’s Police Accountability Task Force clearly and strongly recommended that a community police commission appoint the administrator. Reboyras simply ignores that recommendation.

In broader terms, Police Board President Lori Lightfoot, who chaired the mayor’s task force, has said that any police commission that is “merely advisory” is not what the task force had in mind.

It was Fraternal Order of Police President Kevin Graham who argued for maintaining mayoral and council control over police accountability agencies. “The democracy this group supposedly demands already exists,” he said. “The mayor is elected. So is the City Council.”

Of course, the mayor and City Council have overseen police accountability for decades, and we know how that has worked. One problem is that the issue of policing is just one of many in those elections. Aldermen are elected to fill potholes. Mayors are elected because of presidential endorsements, or bombardments of misleading TV commercials.

And sometimes those elections are less than meaningful – as in 2015, when Reboyras was re-elected with 100 percent of the vote after a young challenger was thrown off the ballot, not because of bad signatures on his petitions, but because his petitions weren’t properly bound.

Now this “elected official” is – according to him, all on his own – determining what the City Council will and will not consider. He has said his committee will hold neighborhood hearings on his two proposals and GAPA’s ordinance. He has said he doesn’t think the council should consider the CPAC ordinance.

The CPAC ordinance, backed by a grassroots coalition including many survivors of police violence, goes far beyond GAPA’s proposal. GAPA would establish 22 elected three-member police district councils that would largely focus on community policing – an initiative that seems to be permanently stalled in Chicago. Council members would form a committee to select members of the citywide Community Police Commission.

In contrast, CPAC would be composed of 22 members, each elected from one police district, who would have salaries and staff and the power to investigate police misconduct within their own district. The citywide CPAC would replace the Police Board and COPA and would assume responsibilities now held by the mayor – hiring the superintendent, setting policy, negotiating union contracts, and making disciplinary determinations.

There’s no existing model for CPAC.  It embodies longstanding demands for community control of police.

By leaving CPAC out of consideration, Reboyras would ensure that the end result would be a watered-down version of what is in a real sense already a compromise.

But one thing is predictable, judging from past hearings: a lot of people speaking at Reboyras’s neighborhood hearings – including many of those most impacted by police misconduct – will be calling for full community control as envisioned by CPAC.

They’re serious, they’re engaged, and if we’re going to have an open debate about police reform, they should not be shut out of the process. Decisions about policing in Chicago should not be left in the hands of two politicians.

Disclosure: The Chicago Reporter is an editorially independent program of the Community Renewal Society, a member organization of the Grassroots Alliance for Police Accountability (GAPA).