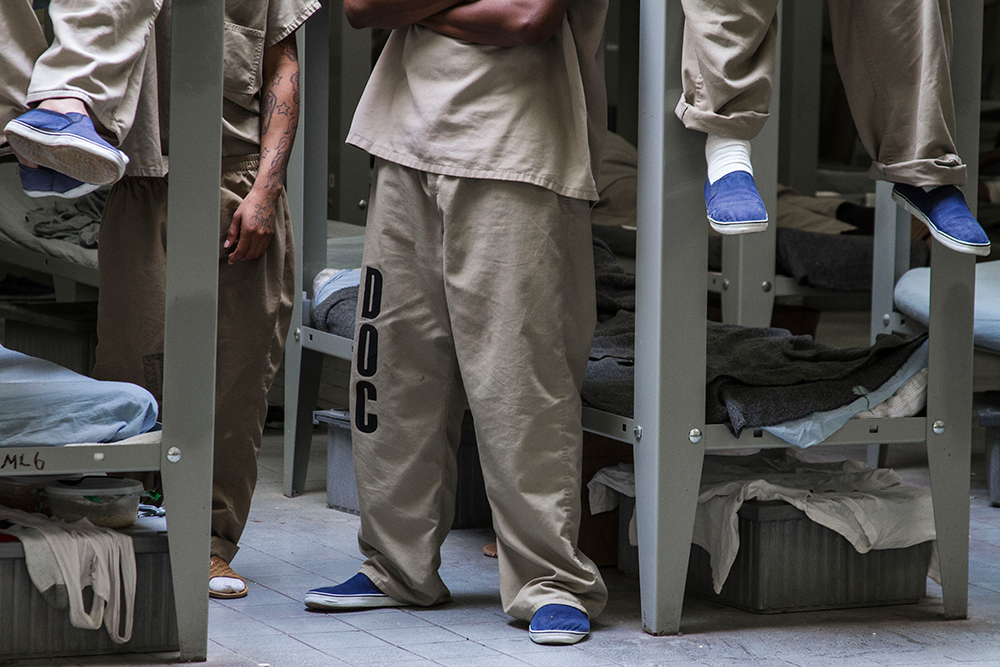 Male inmates at Cook County Jail wear the required uniform--tan scrubs--inside one of the facility's barracks-style detention areas in September 2013.

Most people see a jail and think about crime, tragedy and heartbreak.

Others see dollar signs. That’s because incarceration can be a big money maker.

Consider the drab polyester and cotton scrubs worn by detainees and inmates at Cook County Jail, where about 100,000 people are booked annually. (At County, the men wear tan and the women wear blue, not the more infamous orange.)

In 2012, Ohio-based company Pyramid Enterprise Supplies, a minority-owned business that also provides Smith and Wesson handcuffs and leg locks to the jail, won a two-year,  almost $1.7 million county contract  to provide the Cook County Department of Corrections with clothes, undergarments and accessories. Jail executive director Cara Smith said the county activated the first of three renewal options for the contract last fall at an additional cost of about $340,000.

Not every company making inmate uniforms sees it as a cash cow or its main source of revenue.

Owner Kim Bingham said “catering to inmates, to jails,” is not her business’ primary focus, that she gets more business from police departments and government agencies. Her company also sells sportswear, outerwear and caps.

Representatives for the now-defunct Robinson Textiles could not be reached for comment.

Greta Modlin, a spokeswoman for Bob Barker Co., said company officials weren’t available for comment. In response to the sweatshop allegations, she referred the The Chicago Reporter to previous statements by company president Robert Barker in which he denied violating any labor laws and said a monitoring system was in place to prevent such violations.

Smith said Bob Barker Co.’s alleged sweatshop ties from years ago were not something she was aware of before the Reporter brought it to the county’s attention last week. She said the jail doesn’t want to do business with the company if there’s proof of current sweatshop labor being used.

“The allegations are extremely concerning and we’re going to be asking the county to investigate that connection and suspend the use of that subcontractor if there’s any validity,” Smith said. “This was the county’s contract but since it’s been brought to our attention we’re going to ask that it’s looked at immediately.”

Smith said the incentive that incarceration gives private entities to profit from taxpayer money is “an issue we’re concerned about.” It’s one of the reasons Cook County Sheriff Tom Dart has spent so much energy trying to lower incarceration rates in the county, she said.

“It’s a very significant concern and it’s sort of at the heart of the justice issues we wrestle with every day,” Smith said.