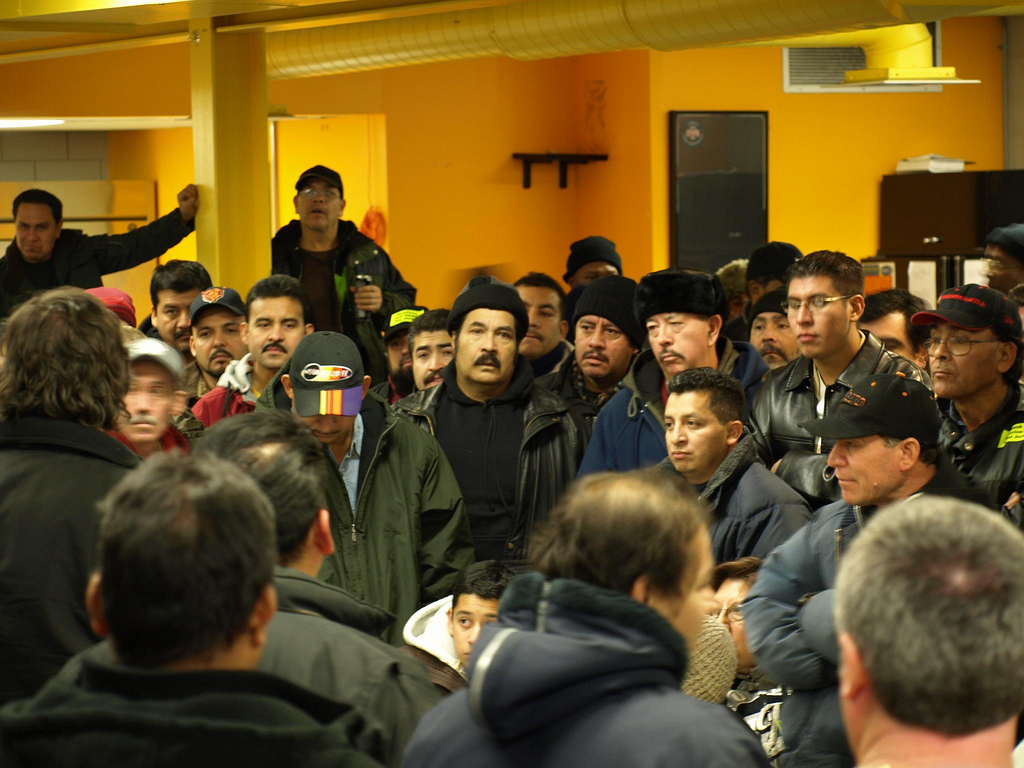 More than 200 employees of Republic Windows and Doors staged a six-day sit-in December 2008 when the factory was abruptly closed, resulting in a settlement. The occupation received international attention and became a symbol of workers’ rights amid the economic recession.

On a frigid evening near the close of 2016, while going to a meeting at Goose Island, I was a bit startled to recall another frigid gathering there eight years earlier.

In 2008, Barack Obama was president-elect, the economy was collapsing, and the workers at Republic Windows and Doors occupied their factory to protest its sudden shutdown.  You stepped inside the building and saw the very serious faces of blue-collar workers, mainly black and Latino, who had taken a very serious step at great personal risk in order to take back some control over their future—and  perhaps set an example for the rest of us.

Outside the factory, a ragtag collection of labor activists rallied in support of the workers inside.  But they weren’t alone, with the governor and members of Congress in their corner. And Obama himself issued a statement backing the occupation.  A new direction for the nation seemed possible.

Eight years later, Rahm Emanuel is mayor of Chicago, Donald Trump is president-elect, and more workers are at risk. During the meeting I attended at UI Labs, a high-tech incubator, bright-eyed young city planners narrated slides showing bike bridges and jogging paths, amenities aimed at selling the “modernization” – or, as Ald. Brian Hopkins advocates, elimination – of the Clybourn planned manufacturing district.  But there was no discussion of the ultimate loss of thousands of good-paying, family-supporting blue-collar jobs that would follow.

In Rahm Emanuel’s Chicago, development benefits the wealthy, and the rest of us can just move out, for all he seems to care.

Already, Trump is copying one of Emanuel’s signature tactics, claiming credit for attracting or saving every possible job he can.  Trump is also copying Emanuel in exaggerating the number of jobs he’s kept here.

As president, Trump is likely to confine himself to his bully pulpit, hurling tweets like thunderbolts, while his right-wing cabinet and Congress run amok or crash-and-burn.

Emanuel, we’re told, has rehabilitated himself again –the second time by my count, with the first time coming after his unpopular school closings and at a cost of many millions of dollars. If he has rehabbed himself, it’s due to his laser focus on his top priority, which is his public image.

But Emanuel has a stubborn political problem, which is a real-life problem for the rest of Chicago: the city’s epidemic of violence.  Unfortunately, the mayor’s anti-violence program – more cops and longer prison sentences – is not going to get to its roots.

Under Emanuel, while the national economy rebounded and employment rose, youth unemployment has climbed by double digits in low-income communities.  For my money, there’s one statistic on which the mayor should be judged: the gap between unemployment rates for black and white Chicagoans.  Before he came into office, black Chicagoans were 2.5 times more likely to be unemployed than whites. In the last five years, that ratio has grown: According to the National Urban League, black Chicagoans are now 3 times more likely than whites to be unemployed.

These numbers reveal Emanuel’s failure and his responsibility for the crisis in Chicago’s communities.

In response, Emanuel has announced a number of initiatives, including an economic development fund financed with fees paid by residential and retail developers who are allowed to move into planned manufacturing districts.  But we’ve seen this before–press releases and press conferences announcing grandiose plans that came to little or nothing.

Addressing Chicago’s jobs and violence crisis is going to take a major shift of priorities.  We’re not going to get that from politicians who brag to wealthy supporters about eliminating health insurance for their constituents.

Eight years ago, Republic workers sat down, risked arrest, and forced big banks to come up with their severance pay.  They went on to reorganize their company as a workers cooperative.  It’s that kind of courageous and strategic confrontation with the status quo, focused on economic justice, that holds the best hope for progress in the age of Emanuel and Trump.