Finding children who need preschool the most sometimes takes more than just putting out the welcome mat. That reality is at the heart of an agenda set by the Illinois Early Learning Council, the advisory body for the state’s free universal preschool program. The goal of the agenda: Find and enroll children who are the most at-risk of academic failure and who need preschool the most, but whose families are not aware of, or are not taking advantage of, free preschool.

“The idea of ‘If you build it, they will come,’ doesn’t always work,” says Elliot Regenstein, a co-chair of the council. “We want to make sure we have reached the highest priority children first.”

With that goal in mind, the council created a special committee to craft recommendations for serving these hard-to-reach children. The recommendations were adopted by the Illinois State Board of Education in mid-March and posted online as a report for preschool providers, who must include strategies for serving hard-to-reach children in their funding proposals for the coming school year.

Experts say all children can benefit from a high-quality early learning program to prepare them for academic success in elementary school and beyond. Illinois has won national recognition for its efforts on this front, through its ambitious Preschool for All initiative. A state advisory board has recently crafted a set of recommendations for the state’s newest agenda: to find and enroll those children who are considered the most at-risk and would benefit the most from preschool, but who are often hard to reach for a variety of reasons:

The report includes a list of criteria to help preschool providers identify children who are most at-risk, including children who are homeless or from immigrant families. (For related stories, see “In an out of preschool” and “Serving newcomers“.)

The council is also taking a closer look at existing preschool models that target hard-to serve-families, to determine whether they should be duplicated. One such model is in the south suburbs, where the early education advocacy group Illinois Action for Children launched a program that brings children in home day care to child care centers that provide an early childhood curriculum. (See story.)

With this model, Illinois is ahead of the national curve. Very few states have figured out how to serve families and children who are in home-care settings, says Anne Mitchell, who heads Early Childhood Policy Research, an independent consulting firm. “Illinois has done a good job of it.”

In fact, Illinois has won national recognition for its preschool efforts on other fronts as well. The state ranks first in the nation for providing access to preschool for 3-year-olds, and meets nine of 10 quality standards, such as low class sizes, according to a 2008 report from the National Institute for Early Education Research.

This year, for the first time,the Illinois State Board of Education is requiring preschool providersto include plans for serving the most at-risk youngsters in theirfunding proposals for this fall. ISBE has developed guidelines for finding and enrolling these hard-to-serve children. The guidelinesare based on recommendations from the Illinois Early Learning Council.

Along with Illinois, California is another state that is zeroing in on the hard-to-serve. Education officials there recently rolled out plans for a research project that will identify where hard-to-reach families live, the languages they speak, what makes them tough to reach, and the best ways to communicate the benefits of preschool to them. ProProse, a social marketing agency in Sacramento, is leading the project along with teams from the Department of Public Health Sciences at the University of California at Davis; ConsumerQuest, a marketing research company; and U.S. International Media, a media strategy firm.

In 2007, the results of a grassroots survey began to shed light on the issue of reaching hard-to-serve families.

Illinois Action for Children, the group Community Organizing and Family Issues, COFI’s parent-focused group POWER-PAC and the Logan Square Neighborhood Association teamed up to survey families in Englewood, Austin and Logan Square to find out why they were not enrolling their children in preschool. For instance, preschool seats in a new state-of-art community center in Englewood were not being used. (See  Catalyst, September 2007.)

The survey revealed that more than half of nearly 800 3- and 4-year-olds were not enrolled in a child care center or preschool. Yet, few families cited lack of access as a problem. Rather, parents were most likely to report that they had not enrolled their child because they felt he or she was not ready for school or did not need early education—responses that revealed the need to teach parents about the benefits of early education for all youngsters.

Thirteen percent of parents cited the cost of preschool, a finding that shows families are not aware that the state preschool program is free. Fifteen percent of parents said lack of transportation kept them from enrolling children in preschool. For instance, in Englewood, grandparents who were caring for infants as well as young children reported that it was too burdensome to drop off and pick up preschoolers, or that they had no way to do so.

The council’s recommendation: Hire adults from the community to walk children to and from preschool, or have part-time staff from preschools pick children up and bring them home. Such a program might cost a preschool about $4,580 a year, according to estimates from the Illinois State Board of Education. Purchasing and operating a bus could cost up to $25,600 a year, ISBE estimated. (ISBE provided the estimates for preschools to use as they prepare their funding proposals for the coming year.)

“If a particular program provides a rationale for transportation, we will approve it if the funding is available,” says Kay Henderson, ISBE’s division administrator of early childhood education. “We want to encourage programs to go after these families.”

With lack of awareness as the top barrier uncovered in the survey, the Early Learning Council is promoting home visiting programs to reach these families early in the game, before children reach preschool age. (See story.)

“We know there is no cookie-cutter model and that one size does not fit all,” says Judith Walker Kendrick, director of the Chicago Coalition for Site Administered Child Care Programs and a co-chair of the council’s committee on hard-to-serve children. “The hard-to-reach [families] need more than, ‘Register your child by this date.’ Other things need to happen.”

Another strategy entails “using people who are known in the community and getting them to go door-to-door,” says Henderson. “Families recognize and trust them, and will accept the information.”

This tactic has worked in School District 130 in Blue Island, where all of more than 400 preschool seats are filled. (See story.)  Henderson says District 130’s effort illustrates the level of intensive outreach that is needed to reach the most at-risk, isolated children and families.

The council also has reached out to other institutions to help get the word out about the importance of early education. It has struck a deal with the Illinois Interagency Nutrition Council at the University of Illinois at Urbana-Champaign; the Illinois Department of Human Services; and the local office of the federal Women, Infants and Children program to train staff to talk to clients about the importance of preschool and how families can find programs and enroll their children.

The hard-to-reach committee drafted handouts and talking points to use with parents to educate them about birth-to-3 programs and Preschool for All and explain to parents why children should participate and how they can enroll their child. The talking points provide workers with specific tips on how to push the early learning message. One tip tells workers that if parents feel their children are too young to learn, they should be reminded that the earliest years are when children learn the most.

Finally, a media marketing campaign is also in the works. Radio and television advertisements alone, however, will not be enough to persuade parents to enroll children in early education, says Jerome Stermer, the founder and former longtime president of Voices for Illinois Children who became chief of staff for Gov. Pat Quinn in February.

Stermer hopes to emulate CPS’ annual media blitz for its back-to-school campaign, which stresses the importance of first-day attendance, as well as attendance throughout the year. “I want to have that same story about enrolling a child in a quality preschool program,” Stermer says.

Advocates also note that the work of promoting preschool for the most at-risk will require the efforts of those outside the education arena.

Hard-to-serve families need a host of ancillary services to provide them with the support they need to give their children a good start on learning, Kendrick points out. The original design of Preschool for All included a family support component, in which a staffer would work with parents to get their children into programs, Kendrick recalls.

Once children were in programs, the family support worker would make sure they remained there.  “This is a person who goes out and says, ‘Why hasn’t Suzie been in school for three days?’ ” says Kendrick.

With the state facing exceedingly tough economic times, cuts to social services will factor into the equation.

“If there is a cut-back on alcoholism programs and other supports for parents, it will be harder to reach children,” says Kendrick.  “So we need to keep the bully pulpit alive.”

This issue of Catalyst In Depth is supported in part by a generous contribution from the McCormick Foundation. 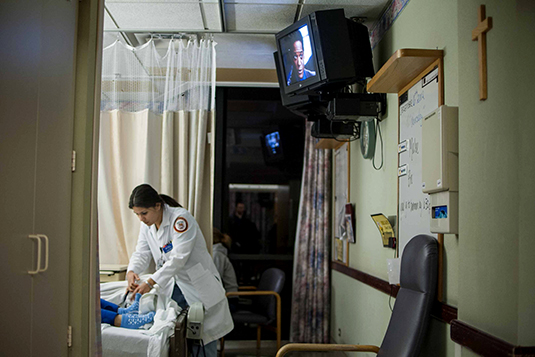 5:06 p.m. A doctor helps Lopez get up from her bed and instructs her to walk around to help her regain her strength.