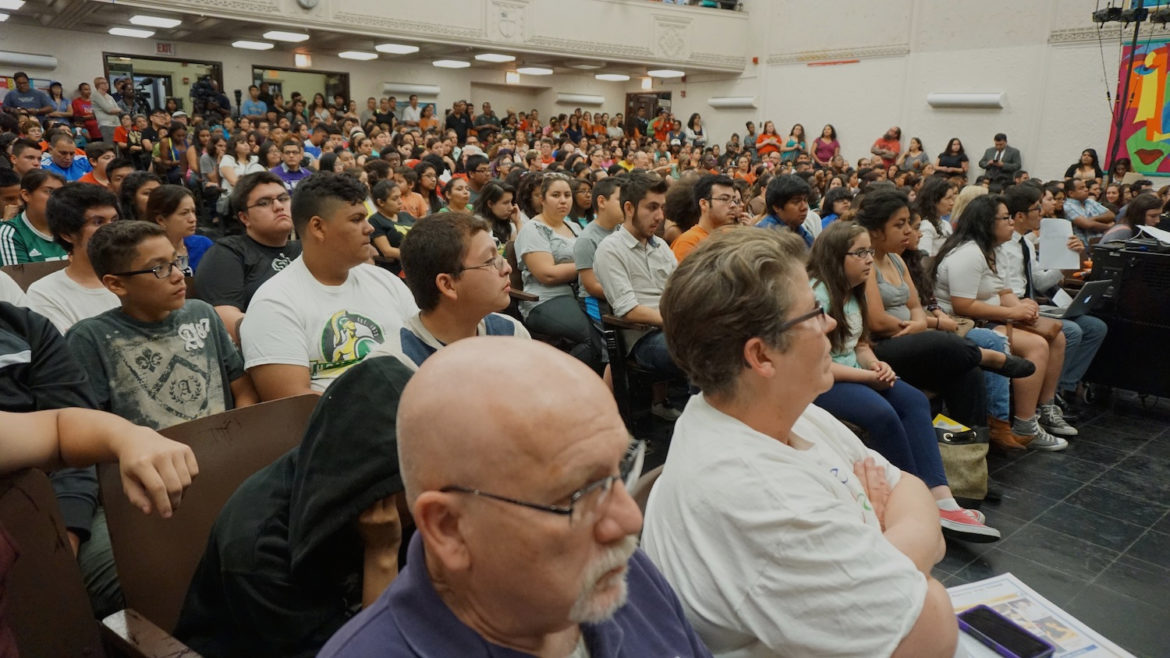 About 1,000 people attended a public forum Thursday, July 23, 2015, at Kelly High School to address a proposal for a Noble high school on the Southwest Side.

In front of an estimated 1,000 community members, several local elected officials declared their support for a burgeoning anti-charter movement on the Southwest Side. Politicians such as (left to right) Ald. Marty Quinn, Ald. Raymond Lopez and County Commissioner Jesus “Chuy” Garcia have declared their support for a burgeoning anti-charter movement on the Southwest Side.

The event was spurred by two new proposals from the Noble Network of Charter Schools in Brighton Park and Garfield Ridge.

“Based on what I see today, I am very optimistic,” Kelly Principal James Coughlin said in an interview.

The rally, organized by the Brighton Park Neighborhood Council (BPNC), was aimed at getting political clout for the anti-charter movement. Ald. Lopez agreed onstage to write a letter to the CPS Board of Education opposing the Noble proposals, following in the footsteps of Quinn and Illinois House Speaker Michael Madigan.

Although Cardenas did not attend the meeting, he spoke to the CPS board Wednesday about how the proposals to add more schools of choice had divided communities and created “a lot of anxiety.”

“I think we should consider a pause on charters,” said Cardenas, whose Southwest Side ward includes parts of Brighton Park, McKinley Park, Little Village and Back of the Yards. He added that CPS needs to get its “financial house in order first” by addressing chronic funding and pension problems.

In addition to the elected officials, 18 area schools pledged their formal support of the campaign through resolutions passed or soon-to-be passed by their Local School Councils.

Coughlin, the Kelly principal. said he had expected around 150 people to attend the event and that the large turnout surprised him. “We owe a bit to the [North Side] schools for coaching us on how to do this,” he added, referring to similar campaigns in prevent Noble from opening in the Uptown and Rogers Park neighborhoods earlier this summer.