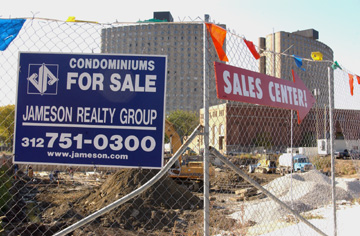 The $47 million National Teachers Academy, the city’s newest, most expensive school, is situated on an island of public housing in a swelling sea of gentrification. Local public housing leaders figure that sooner or later, the sea will claim their impressive new school, which is staffed by master teachers and boasts such extras as a program for infants and toddlers.

Housing trends in the neighborhood suggest it will be later

Although Dearborn Park, a middle-income development, is not in the Academy’s attendance area, Gloria Williams, head of the tenant advisory council in the Harold Ickes Homes, casts a wary eye at parents there. “Those Dearborn Park folks, we know that they’d want their kids to come, with all that the school has to offer,” says Williams.

Even though an Ickes building was emptied and demolished to make room for the Academy, the CHA has no immediate plans to demolish the development. Indeed, the agency is moving families into Ickes as other projects come down. About 50 families moved in last summer, according to Kathryn Greenberg, the agency’s managing director for communications.

Meanwhile, schools are a non-issue for developers and realtors who are building and selling high-priced housing nearby.

“We’re not saying, ‘Hey, we’ve got schools here,'” says William Warman, an architect and developer who is building the Prairie District Homes, an extension of Central Station, in the Academy’s district. “And people aren’t saying, ‘I’m not buying because there’s no school.’ Retail is what people are looking for: the everyday, less-expensive restaurants, the sandwich shops, the little ethnic dinner spots that are $8-10 a person, instead of $50.”

At the prices Warman is charging—$530,000 to $829,000 for town homes—his customers are expecting to pay for private school, he thinks. Asked about the Academy, he says, “I suppose I should go take a look at that, but I don’t know what kids go there.”

At the large-scale private development closest to the school, brokers say they aren’t targeting families at all. “We are geared for the first-time buyer, primarily,” people who typically don’t have kids, says Diane Frale, a broker selling apartments at Pointe 1900. Of the 59 apartments in the first phase, three-quarters are one-bedrooms, and all but two of the rest are two-bedrooms.

Even some public-school parents in the neighborhood don’t yet see the Academy as an irresistible draw. Tasha Moore, an alumna of Drake Elementary who lives at Cullerton and Michigan, was dissatisfied enough with South Loop School that she tried to get her two sons transferred to Drake under the No Child Left Behind choice program last summer.

When the kids didn’t get into Drake, Moore passed on the Academy and kept them at South Loop. Transportation was the deal-breaker, she says. The kids get bused to South Loop, and as a working parent, she doesn’t have time to walk them to school at the Academy.

She worried that the Academy’s location in public housing might be an invitation to trouble for her older son. Her younger son had already made his preference known. “He’s like, ‘I don’t want to go to school in no projects,'” she says.

By the end of the decade, the picture likely will be different. The CHA hopes to turn Ickes into a mixed-income community by then, Greenberg says. She adds that within the next two or three years, CHA will have to decide whether to rehab Ickes or tear it down. The Academy’s presence could tilt the decision toward rehab. Together, the Academy, upgraded buildings and other private investments in the area might make middle-income residents less skittish about moving in, Greenberg says.