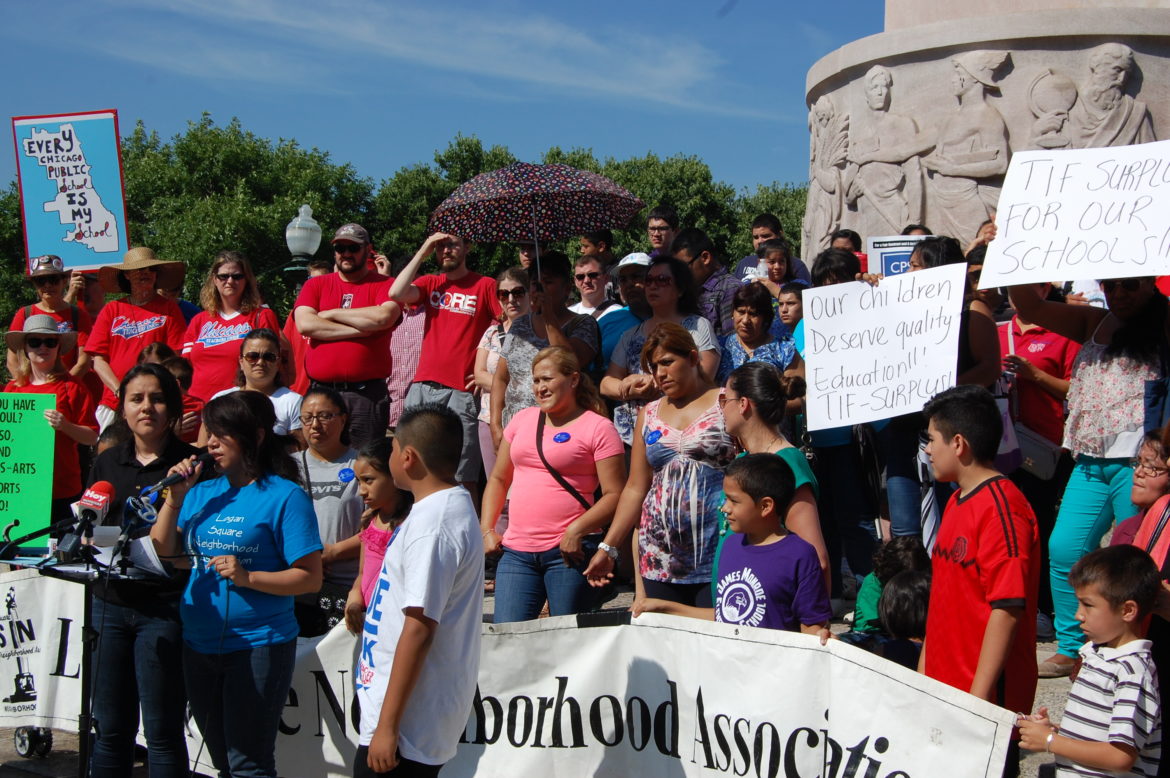 Parents, students, teachers and others rallied in Logan Square to protest cuts to neighborhood schools back in July.

When CPS released its enrollment projections earlier this summer, neighborhood schools across the city braced for hits — and the loss of the dollars that come with each student.

But 10th-day enrollment numbers were even worse than projected: 16 district-run schools — all but two of them high schools — lost more than 100 students this year.

Among the worst-hit were Schurz, Foreman and Kelvyn Park — located on the city’s Northwest Side — and Dunbar, located on the South Side, all of which lost more than 200 students since last school year.

Jerry Skinner, who serves on the Kelvyn Park Local School Council and teaches English at the school, located in Hermosa, says he’s worried about teachers and support staff across the Northwest Side who are losing their jobs.

“I hope we can all band together as neighborhood open-enrollment schools,” he says, adding that the impact of the Renaissance 2010 plan to open new schools is finally “hitting our area, after hitting the West and South Sides.”

Enrollment data released late on Friday show a continuing trend of district-run schools losing students — even more than had been projected earlier this year — while charter and contract schools are educating slightly more CPS students.

The lower enrollment means district-run schools will receive about $15.9 million less than was projected in July. (Unlike in previous years, CPS officials are not holding schools harmless if fewer students enroll than was projected.) Those additional cuts include about $13.3 million in funds set aside for per-pupil disbursement, as well as 52.5 fewer special education aides and 16.5 fewer special education teachers. For each lost teaching position, CPS estimated a $105,000 reduction, and for each lost aide position, another $50,000.

Twenty-seven schools are slated to lose at least half a million dollars — which includes the cost of special education staffers — on top of what was already cut in July. A Catalyst analysis of those schools shows:

District officials say about 325 educators could lose their jobs because their school didn’t meet enrollment projections. Teachers will be notified on Oct. 5 — the 20th day of school — if they will be laid off.

In a statement, CPS officials said many schools were already planning for enrollment adjustments and had left some positions vacant or were holding onto contingency funds to avoid mid-year layoffs.

“CPS continues to work with our principals and their network chiefs to prepare for these adjustments, tracking enrollment leading up to school and in the first two weeks of class, so we believe principals are well-prepared for their adjusted budgets,” said Janice Jackson, CPS chief education officer. “As a former principal myself, I know that our school leaders are the best positioned to make smart decisions about scarce resources, and making sure that they have the most impact on our students’ learning.”

Further cuts may still be on the way. The district closed a half-billion-dollar hole in the 2015-16 budget with the hope that lawmakers in Springfield would agree to help CPS with pension relief. That hasn’t happened, and CPS CEO Forrest Claypool has indicated that up to 5,000 educators could be notified of layoffs in November if no state aid arrives.

Skinner says he’s not sure where else schools like Kelvyn Park High School can afford to make more cuts. Earlier this summer, when the school was expected to lose 125 students and $1.7 million, administration cut 19 staff members, including nine teachers, a career coach, a school counselor and the school’s only full-time social worker. But now that 77 fewer students showed up than projected, they’ll have to cut another $496,000.

He’s worried about low staff morale and how the draining of resources will make Kelvyn Park a less attractive option to families shopping for a high school.

“It’s like two car dealerships across the street and one has shiny cars and one has clunkers,” he said. “It’s hard to compete right now.”

Just under 367,500 students in kindergarten through 12th grade showed up on the 10th day of school, district officials say. Compared to last year, the numbers reflect an overall loss of of 5,588 students, or about 1.5 percent. Previously the district predicted a loss of fewer than 900 students.

The enrollment numbers don’t include children at school-based preschools, due to differences in how those slots are financed. However, the number of CPS preschool students should be similar or slightly higher than last year’s figure of 22,873 because of a variety of new early childhood grants and programs that have since come online.

Using last year’s count of preschoolers, the overall enrollment number would be just over 390,000 — which would be the lowest number in at least 50 years.

Leaving for the suburbs

This year Roosevelt has 193 fewer students enrolled than last year — nearly twice as many students lost than had been projected. Meegan says it’s the first time in his 11 years at the school that the freshman class is smaller than the senior class.

When counselors and administrators reached out to potential students’ families, they were told they’d moved to suburban school districts, he says.

“How do you sell a school to a family when they know we’ve slashed electives, that teachers are disappearing?” Meegan asked.

Meanwhile, enrollment at charter and contract schools grew slightly when compared to last year — but they, too, fell short of projections. The district expected 61,763 students at these privately run schools this fall, but just under 60,000 showed up.

In total, 16 percent of all CPS students in kindergarten through 12 grade attend charter or contract schools. That percentage rises to nearly 18 percent when privately run alternative schools are included with charter and contract schools.

The district won’t release school-level data on these privately run schools until after the 20th day enrollment counts take place.

Some 258 schools fell under enrollment projections, while 235 came in with more students. On average, the district overprojected enrollment by about five students per school.

Blaine Principal Troy LaRaviere says he wasn’t surprised by Friday’s news that his Lakeview elementary school’s enrollment was slightly better than projected — by nine students — because he’s been looking at daily attendance since school started.

“Our budget didn’t get any more inadequate than it already is,” he said, adding that the additional per-pupil dollars of about $36,000 aren’t enough to hire another teacher.

One school that fared significantly better than projected is Kelly High School, where 101 more students showed up this fall than expected. Still, the school lost a total of 42 students from last year — and has been shedding students for years. A decade ago, more than 3,100 students were enrolled at Kelly; this year there are 2,255.

In recent months the principal of Kelly and other neighborhood high schools on the Southwest Side have rallied together to protest a proposal to open a Noble charter high school nearby, which they fear will drain more students.

Here’s a look at the 10 schools that were most above and below enrollment projections, according to CPS data: