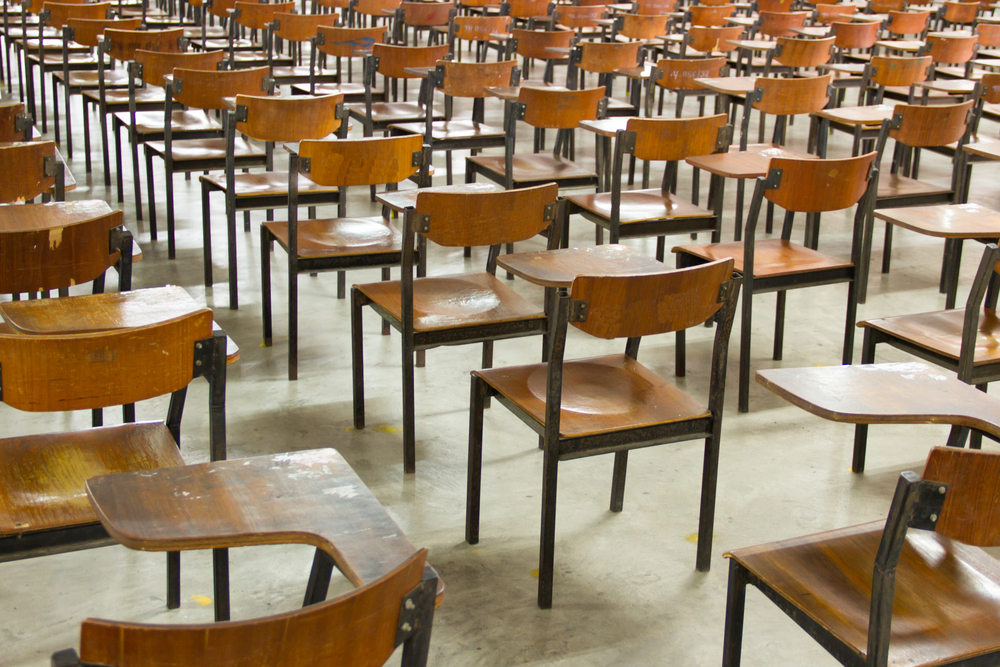 We’ve seen this before, and it isn’t pretty: Governor Bruce Rauner and Springfield Republicans taking a straightforward legislative process and hijacking it with unrelated items reflecting their right-wing agenda.

Currently, Rauner and the Republicans are doing just that with school funding reform, tossing in major changes—including a last-minute push for a program similar to private school vouchers that could siphon tens of millions from public schools.

Illinois’ inequitable school funding system is universally acknowledged as a problem. The solution is straightforward, endorsed by the governor’s own task force on funding reform: revamp the funding formula to ensure each district has added resources, based on measures such as the number of low-income children, children with special needs and other factors that increase the cost of education.  SB1, passed by the General Assembly in May, encompassed this approach, including a guarantee that districts would not lose funding and provisions aimed at treating all school districts’ pension funds similarly.

But in response, Rauner issued an amendatory veto containing a long list of changes.  “[Rauner’s education] secretary [Beth] Purvis said in June that the governor supported 90 percent of what was in the bill, but the veto is a lot more than a 10 percent change,” said Bobby Otter of the Center for Tax and  Budget Accountability, which has promoted the adequacy model of funding.

The state Senate has already voted to override Rauner’s veto. The House will vote on a potential override next week.

What accounts for Rauner’s escalating demands? Could it be the influx of reactionaries from the Illinois Policy Institute – which has opposed the adequacy model – onto Rauner’s staff? Could they indeed be intent on “sabotaging” SB1?

The CTBA has identified six provisions in Rauner’s amendatory veto that “frustrate SB1’s core purpose” of providing adequate and equitable funding.  The provisions, which include removing inflation adjustments to funding and ignoring the impact of property tax caps and tax increment financing districts on local funding, would divert money away from districts that are already falling short on funding.

Rich Miller has written that Rauner’s changes in the treatment of tax caps and TIFs show that despite all his talk of freezing property taxes, the governor in fact “wants to force local school districts to raise their property taxes to avoid state funding cuts.”

The governor’s office disputes CTBA’s analysis and argues that instead of raising property taxes, districts could release property wealth now locked up by tax caps and TIF districts.

“The governor’s top priority has always been fair and equitable school funding that directs adequate resources to disadvantaged school districts and gives all chidren access to a high-quality education,” said spokesperson Meghan Keenan.

But wait – Republican legislators, and even Rauner himself, now indicate they’re willing to ditch this agenda entirely, as long as they can get a few changes that have nothing to do with fixing the school funding formula and everything to do with a right-wing agenda.

For one, there’s State Sen. Jason Barickman, a Bloomington Republican and a lead negotiator on the legislation, who now says he’ll support pension relief for Chicago Public Schools if other districts can have the “management flexibility” – that is, limitations on collective bargaining rights – that state law has granted CPS.

This is nothing more than an attack on the living standards of working people.  And in Chicago, the outsourcing of janitorial services has led to many loud complaints about dirty schools, as for-profit contractors cut corners.

“The people pushing vouchers realized that they don’t poll very well, so they came up with the formulation of ‘tax credit scholarships,’ which sounds very benign,” said Cassie Cresswell of Raise Your Hand, the parent’s public school advocacy group, which opposes the concept.

Vouchers have been around a long time, though they never gained traction here in Illinois.  They were first proposed by free-market economist Milton Friedman, who thought competition would improve schools. That hasn’t happened – witness Milwaukee, with one of the largest and oldest voucher programs in the nation and some of the lowest-scoring students of any big city.

There’s also research from Stanford University, where an analysis of over two decades of previous research found that vouchers did nothing to raise student achievement and in fact, diverted resources from proven educational programs. In fact, a program in Washington, D.C. was found to actually lead to lower test scores.

What vouchers have done is divert funding from public education, especially in districts that enroll low-income students of color.

Instead of the direct tuition subsidies that vouchers provide, Illinois Republicans want to offer “tax credit scholarships”–tax credits for individuals and businesses that donate to qualified “scholarship organizations” that provide tuition subsidies for students in private and religious schools.  The idea has been pushed by the right-wing American Legislative Exchange Council and is a centerpiece of President Donald Trump’s education agenda. Seventeen such programs exist nationwide.

In many cases, donors reduce their state income tax payment by the total amount of the donation.  In some states, because donors can then turn around and deduct the same amount from their federal income tax, they can actually make money by donating to the scholarship funds.

The current proposal in Illinois would provide a 100 percent credit, covering up to a $1 million individual donation. There would be a statewide cap of $100 million in credits each year, but with a provision for automatically increasing the cap.

That’s $100 million not going to the state’s general fund, which is the major source of state funding for schools. That’s in a state where – according to Rauner’s own commission – we need to spend $3.5 billion more in order to reach adequacy.

Reports indicate the legislature’s Democratic leadership is open to this proposal, though they are still pushing for an override of Rauner’s veto.

To take a discussion on how to fund schools equitably “and throw something in that would siphon money away from our already underfunded schools” is “despicable,” Caswell said.

SB1 was the result of four years of research, hearings, and negotiations.  The “neo-voucher” proposal is purely the product of backroom bargaining.  “To not have a full discussion” about starting such a radical program in Illinois “is bad policy and bad procedure,” Creswell said.

Unfortunately, there’s plenty of precedent for that.