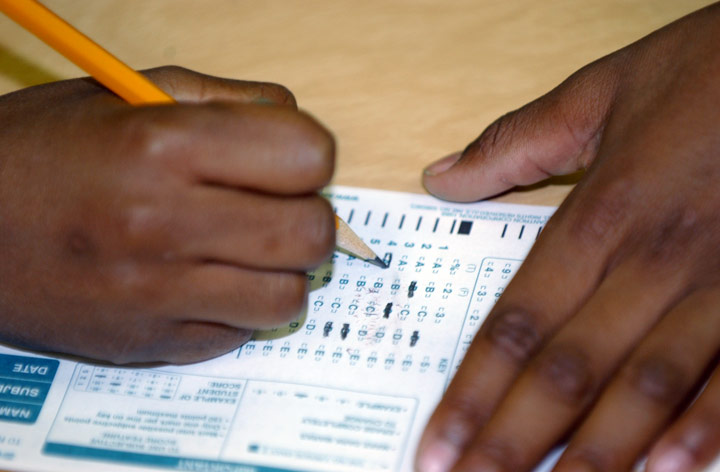 A student marks answers on a test sheet.

The marquee outside of Beidler Elementary School in East Garfield Park makes the bold statement: We are off of probation.

But when parents trucked into the school last week to pick up first-quarter report cards, they got some sobering news from the district’s colorful new school progress report: Beidler is categorized as a mid-level school in terms of performance on state tests, but less than a quarter of students scored at or above grade level on a different, more rigorous test and only 7.5 percent of 8th-graders met college readiness benchmarks.

For the past couple of months, the new Chicago Public Schools leadership has been doing its best to make it clear that, despite years of test score gains on the ISAT, students are far below the standards they need to reach to be ready for college and the workplace.

Now, the new school reports are giving parents their first glance at the discrepancy between the already-reported data from state tests and the newly-reported results from tougher tests that are aligned with national norms.

The new reports also give a glimpse into how schools might stack up on the new Common Core Standards and the tests that will accompany them.

At schools considered the district’s “gems”– mostly North Side magnet schools and selective enrollment elementary schools–the vast majority of students are meeting or performing well above the new standards. For example, at Sauganash Elementary School on the Far North Side, about 80 percent of students meet standards on the newly-reported tests. While that is not the 95 percent the school achieved on the ISAT, it is still notably better than other elementary schools.

In contrast, at Lawndale Elementary School, less than half of the students met standards on the ISAT and only 2 percent of 8th graders met college benchmarks on the Explore, a precursor to the ACT.

But many schools considered success stories—those mostly low-income, mostly black and Latino schools where students are now mostly passing the ISAT—are still worlds away from preparing their students for college.

Beidler is one example of that. So, too, is Frazier International, a magnet school that celebrated a singular achievement: The school is 90 percent black and 90 percent low-income, and over 90 percent of its students met standards on the ISAT.

Yet only 30 percent of Frazier’s students are meeting college-readiness standards in 8th grade.

Even elementary schools run by the Academy for Urban School Leadership, where CEO Jean-Claude Brizard went this summer to laud their improvement on the ISAT, look far different through the lens of new assessment.

At Morton School of Excellence Elementary, which posted a 25 percentage-point jump in students meeting standards, only seven percent of 8th– graders are performing at a level that puts them on a trajectory to do well on the ACT.

Chief Education Officer Noemi Donoso says that the information from the ISAT and the new school progress reports are not meant to be compared. (They did not post any central database with the NWEA/Scantron scores; Catalyst manually entered them into a database.)

“They are two completely different sets of data,” she says. District officials also did not spend much time looking for any trends between the two, she adds.

However, Donoso admitted that there could be a downside to publishing different, and somewhat conflicting, performance measures on schools.

One indicator shown on the school progress report is the performance level as determined by the district, using ISAT test scores as well as other factors such as attendance.

District officials have said only schools at Level 3, the lowest level, will be considered for closing. However, some schools at Level 3 are performing better on the more rigorous test than some of those in the lower levels.

“It is no question that it is a challenge,” Donoso says. She hopes that parents can understand the distinction between results on the ISAT, which only measures the percentage of students who meet or exceed standards, vs. results from other tests that measure more rigorous college ready benchmarks.

District officials have good reason for releasing the new progress reports, though. In just two years, the ISAT will disappear and be replaced with tests tied to the Common Core Standards. Most experts believe that test results will initially be noticeably worse.

Releasing test scores based on a more rigorous exam is meant to prepare parents and politicians for what is to come (and perhaps so that the new CPS leadership doesn’t get blamed for the plummet). As Donoso says, “We need a benchmark.”

But whether parents and others understand and heed the message of these school report cards is questionable. For one, at several elementary schools visited during Track E report card pick-up, the progress reports sat in a pile at the front desk. They were handed to parents with no explanation.

Also, there’s no comparison data anywhere on the report card, so it is difficult for parents to know where their school stands in relation to others.

Karen Smith, a grandmother who was picking up her granddaughter’s report card at Beidler, said she’s heard that neighborhood elementary schools are now performing better, but that news has never rung true for her. In her job at a nursing home, she says she runs across young people who are barely literate.

“I am telling you,” she said. “They can hardly write their name.”

But glancing at Beidler’s progress report, she shrugged at some of the low scores. What matters to her is how her granddaughter is doing, and that, she believes, is more her responsibility than the school’s. She shook her head. “It is my fault if she can’t read,” Smith said of her 5-year-old granddaughter. “She doesn’t focus as well as I would like.”

At Cather, also in East Garfield Park, the story was much the same. Cather received a Level 1 (the highest performance level possible), but on the more rigorous test, only a third of students are reading at grade level and a mere 5 percent of 8th-graders met college readiness benchmarks.

One mother looked at the report and seemed puzzled. “Are 8th-grade students supposed to meet college readiness benchmarks?” she asked.

Milton States, a dad who came to get his two daughters’ report cards, said he liked that CPS was trying to show parents that schools aren’t as good as they should be. “If these are the facts, then these are the facts and something has to change,” he said. “I don’t see nothing wrong with it.”

But at a Logan Square Neighborhood Association parent coordinator meeting, the organizers (all mothers) said they thought the school progress report was a poor way to communicate. Given to parents along with a stack of other information, many will overlook it at report card up time.

Further, few parents understand the distinction between the variety of tests, and many will be nonplussed at the discrepancies.

Reynalda Covarrubias, parent coordinator for Funston Elementary School in Logan Square, said teachers did take more time to talk with parents at report card pick up this year. But being told that the vast majority of students aren’t where they need to be doesn’t seem productive.

“Color ink is expensive,” she said. “Instead of spending money on printing this, why don’t they give us positions?” Covarrubias noted that Funston lost two teachers this year.

Leticia Barrera, part of the education team at LSNA, said that often CPS leaders think that publishing a school progress report such as this one is communicating effectively. But many times parents don’t understand or grasp the consequences of the information.

“They don’t know how to communicate with parents,” said Barrera. “Parents are often the last people to get the information and then they are told that they have to take responsibility for it.”