In 2003, Chicago launched an unprecedented experiment in high school reform by opening two tiny schools modeled after a successful yet unconventional program in Rhode Island that scraps regular classes in favor of independent projects and internships. But this brief excursion on the uncharted waters of school autonomy proved too much for the district to stomach.

The reality of a high school without courses became starkly apparent in year one, when visiting district officials complained that too many kids appeared to be “just sitting around.” Those perceptions magnified during the second year and district officials became more insistent that schools show on paper how their students were learning core academic subjects such as math, science and English. By the third year, the schools capitulated and agreed to scale back students’ independent work and offer traditional courses two or three days a week.

Still, that wasn’t good enough. Worried that kids were missing important skills, and uneasy with the schools’ higher-than-average expense, the district temporarily suspended freshman admissions. Both schools were given one more semester to trim their budgets and show that their program could cut the mustard. If they couldn’t make the case, the district would shut them down.

“I don’t think we’ve had a chance to make the model work,” says Principal Kothyn Alexander of Big Picture’s Williams campus in Bronzeville. Alexander says she was forced to revamp an entire school program that was barely off the ground.

Big Picture schools are not the first to clash with the district over autonomy. Other school operators with a proven track record—KIPP and Providence-St. Mel, for instance—accepted Chicago Public Schools’ invitation to open new schools under its Renaissance 2010 initiative, and later, chafed at bureaucratic restrictions.

KIPP closed its Bronzeville middle school after only three years, citing, among other things, a lack of control over school activities and schedules. Providence Englewood—opened just this fall and modeled after its namesake, a successful, West Side Catholic K-12 school—is already tussling with the district over whether it has to follow, to the letter, the same policies and laws that govern other public schools.

But the controversy surrounding Big Picture is the clearest example of how difficult it is to reconcile a radical academic approach with a bureaucracy that favors standard procedures.

Details left unresolved from the start left the door open for conflict between the district and an inexperienced school staff grappling with an ambitious program. Here’s what went wrong.

Devil in the Details

CPS recruited The Big Picture Company, an education non-profit in Providence, R.I., during a search for innovative national models. Big Picture had recently replicated its flagship school, known as The Met, in Detroit and Oakland with backing from the Bill & Melinda Gates Foundation.

A team from Chicago toured the Big Picture school in Providence and walked away impressed. Inner-city kids without much prior success in school were engaged in projects and internships tailored to their own interests. Dropout rates were low, college placements exceptional.

Still, the model presented obvious challenges. Limiting class size to 15 students was expensive. Illinois education requirements did not mesh with the program’s loosely organized structure. But Big Picture staffers were reassuring and CPS officials figured they would solve problems as they went along, recalls Greg Richmond, who was then charged with overseeing new schools. “The only way you’re going to make it work is to jump in and make it happen,” he says. “That was the mentality.”

Yet as the program got underway, the loose ends began to unravel.

Just as the Big Picture schools opened—one in Bronzeville, the other in Back of the Yards—the district revamped school oversight to pave the way for closer scrutiny of classroom instruction. However, staff of the newly created area instructional offices were not trained to assess Big Picture’s avant-garde curricular approach, says Edward Klunk, then with the Office of High School Programs. That might have lead to misperceptions, he says, like “these kids aren’t learning algebra; they aren’t learning U.S. history.”

Klunk suspects problems on the school end as well: Kids struggling to adapt to a looser structure and teachers unaccustomed to managing one.

In 2005, Area Instructional Officer Cynthia Barron drew a line in the sand. Schools had to spell out how they were going to teach and assess students on all of the skills and concepts listed in the state standards. “There was no plan,” she says.

Big Picture Co-director Elliot Washor says he suggested an approach that worked in Oakland. There, educators keep a list of California state standards in each student’s folder with a checklist showing how each standard is met—through an internship, an independent project, college course or some other method. Students would meet standards at different times during their high school career but by the end of four years, they are expected to have met them all.

Washor thought district officials were opposed to his idea, so he dropped it. Barron says she was open to it but Washor never followed through. So she simply required Big Picture to do what every other CPS school was required to do: map out academic skills and concepts that would be taught every quarter in every subject. She also insisted that the schools set a schedule for classes and offer the state-required amount of instructional time in each subject.

The mandates were not intended to force Big Picture schools to abandon their independent work model for traditional courses, but the schools had to find a way to follow state law, Barron says. Alexander says she saw no way to meet these demands outside of adding traditional courses; Alfredo Nambo, principal of the Back of the Yards campus, sensed a level of discomfort and figured adding courses was the safest way to appease it.

By year three, both had modified their programs to accommodate two or three days of classes and the rest of the week for internships. (The following year, both schools upped it to three days of classes.) Students pursue their independent projects mostly on their own time. Today, the schools are still working on their “curriculum maps” and on assessments to prove that students will learn what they need to know to meet state academic standards.

Still, Barron is not satisfied with the schools’ progress and has recommended that freshman admissions remain suspended for a second year. District officials have not yet decided whether the schools will be shut down or phased out at a future date.

In 2006, Big Picture at Back of the Yards says it scored 15 on the ACT; Big Picture in Bronzeville says it hit 17, the district average. Performance figures for Big Picture schools elsewhere are a mixed bag, as well. In San Diego and at the flagship in Providence, scores are beating district averages, some by wide margins. Others, like two in Indianapolis, are posting below-average marks.

Small class size—15 versus 28 at a typical CPS high school—and low capacity enrollments (about 120 students each) make the schools more expensive to operate on a per pupil basis. The small size is defensible, says Klunk, a former principal of a large high school, because teachers are supervising so many different projects and internships. “It’s a very intense situation,” he says.

Yet Alexander says she was floored by the request to cut her budget. CPS could have made that call four years ago, she says, “before we got teachers and kids involved. Our cost should [not] be a surprise.”

If the district allows his school to stay open, Nambo says he will recruit volunteers and student teachers to help his staff cope with larger class sizes.

Big Picture schools were put into play here three years before the district set criteria for new schools that opened under the Renaissance 2010 initiative. Those new schools are expected to fit their budgets into a formula that aligns per-pupil costs with the districtwide average.

Big Picture schools in other cities have kept costs in check by eliminating art, music and physical education. Instead, students pursue those activities through extra-curricular activities, internships and community programs. In Chicago, the schools share three teachers in those subjects, adding $190,000 to the bottom line.

Yet, here in Illinois, getting rid of art, music and P.E. would require a waiver from lawmakers that exempts them from state law. During early planning meetings, Big Picture’s teams floated the idea of obtaining such waivers, but never followed through, Klunk notes.

CPS considered signing a formal contract with The Big Picture Company that would stipulate school staffing and other programmatic details. But after passing a draft back and forth between the two parties for a couple of years, the district decided against it “to retain flexibility,” says Richmond. Besides, it wasn’t clear whether a contract was necessary, Richmond adds, since Big Picture was slated to provide free training and consulting rather than actually managing the schools.

Washor of The Big Picture Company says he was used to informal arrangements in other districts, and the lack of a contract didn’t bother him at the time.

But the turnover in central office—he counts at least five key district-level contacts who left, retired or switched positions—meant that Big Picture had to continually explain and justify its program. “People couldn’t understand who we were.”

The idea of opening Chicago’s two Big Picture sites as charter schools, which by law have the freedom to set their own curricular program and schedule, was also discussed early on. Of the 45 schools in Big Picture’s network, about half are charters. In retrospect, that’s the road the group should have taken in Chicago to keep its original model intact, Washor says.

But district officials argued that opening them as regular CPS schools would be an important learning experience for the district, Washor recalls, with irony.

“There were some folks who said, ‘This is an opportunity for our district to see how we can accommodate schools who need more autonomy,'” he says. 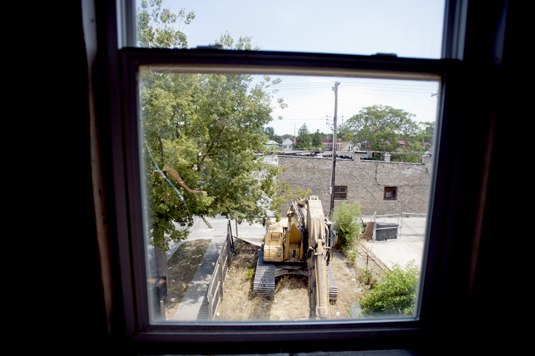